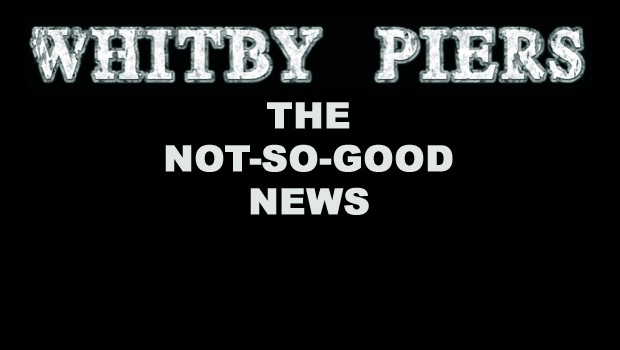 A Letter to the Editor from Derek ROBINSON. Derek writes as a member of the public, though he is a member of Whitby Town (Parish) Council (WTC) and a Ukip candidate in the forthcoming elections for both Scarborough Borough Council (SBC) and WTC.

He writes, in the public interest, to ensure that the Whitby electorate is fully apprised of the true nature of recent developments regarding the financing of the urgent and immediate need for maintenance work on Whitby Piers – an issue that has been pressed into service as an electoral flag-waver for incumbent Conservative MP Robert GOODWILL and SBC Councillors Joe PLANT and Alf ABBOTT.

And now, the truth.

Every elector in the Borough needs to be fully aware of this.

Well the election con has been exposed; the Tories tried to hoodwink the people of Whitby into believing that they had sorted the issue with the Piers and led us to believe that work was going to go ahead as a result of the changes in the funding arrangements, that has now been exposed as an election spoof – the truth of the matter is that nothing has changed and I have seen a letter sent to the Whitby (Tory Councillors Plant and Abbott, as well as others, telling them that nothing has changed and that no civil engineering work will even start until 2017, at the earliest), so why have Plant and Abbot not come out and admitted as much to their electorate? (Might not be a vote winner). Scarborough Borough Council will not tell us why we still have to wait, the silence is deafening.

As they wont tell us, then we have to come up with our own conclusions.

Despite the protestations of SBC that they are a fair council, it is very clear that they favour Scarborough over Whitby and Filey.

I take my hat off to anyone who gives the time and effort to serve their community through public service such as being a Councillor, but despise the ones that sell their soul for political ends, which is the case with our current Whitby Councillors.

Maybe there is some salvation on the horizon because I have in my possession a document that shows one department in SBC asking another department in SBC to reclassify Whitby golf club from its current classification of land for recreational use to land for residential use. YES – you guessed it – it wants to get planning permission to redevelop the golf club, (yes – another objectionable and unwarranted planning application).

NOW, Councillors Plant and Abbott, what have you to say to that? You seem to have forgotten to have got that article along with the customary picture of Joe Plant in to the so called local paper.

Sorry for the rant, but YOU have to do something about this bunch of Tory puppets that are neglecting and destroying Whitby.