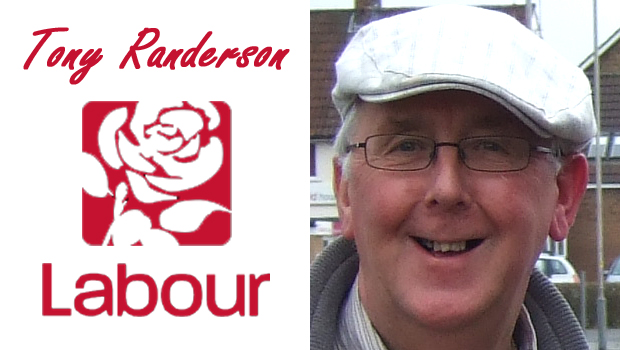 A Letter to the Editor from Tony RANDERSON of Eastfield (who is contesting the Eastfield ward of the Scarborough Borough Council local elections for the Labour Party), introducing himself to the Borough electorate. Tony currently serves as a North Yorkshire County Councillor and has been a member of Scarborough Borough Council during the past term.

When seeking election to these positions of Public Service I gave but one guarantee and that was 100% commitment to this role of public service.

I have I believe honoured that promise by keeping in constant touch with the residents of Eastfield by undertaking Weekly Street Surgeries EVERY week apart from holidays.

Every request for help and assistance has had an initial response within 24 hours; more often than not, on the same day. These requests have all been followed up by reporting back to the residents with those complaints and concerns.

The good residents of Eastfield and indeed the Borough of Scarborough deserve Councillors that truly listen to their residents and not just pay lip-service. I very firmly believe that a Labour-controlled Council would give this platform for residents to truly believe in all their Councillors once again.

During my short period as you Councillor, I believe I have time and again asked very challenging questions of this current Conservative Council, on your behalf, which they have not liked in any shape or form. I promise to continue in this vein. I will not be brow-beaten into submission on scenarios which I firmly believe in and are in the best interests of the Eastfield residents.

I am currently fighting for the future of Eastfield Library and organised a public meeting recently in order to ascertain the residents feelings on this fantastic facility at risk because of Conservative savage cuts to front line services.

I am also fighting tooth and nail for a better maintained road network on the estate which is poor at present to say the least, but again because of shortage of cash this is extremely difficult , NYCC prioritise what they believe is necessary despite my continual demands to have these repairs undertaken.

I am also fighting against the Part Night Lighting Scheme implemented by NYCC this policy demands that 50% of our street lights are extinguished from Midnight to 6am with a saving of 8p per night per lamp, unbelievable but once again down to Savage Tory Cuts.

I have started this work, but there is much more to complete and through the ballot box I sincerely hope that you will see fit to vote for myself and my two running mates John Warburton and Joanne Maw along of course with our Labour PPC Ian McInnes on May 7.

During the last two years I have made many friends in Eastfield, I refer to the Eastfield folk as “The Salt of the Earth” good-natured kind people who are in the vast majority looking to help their fellow neighbours.

The Labour Team will continue to give 100% commitment to these residents of Eastfield.