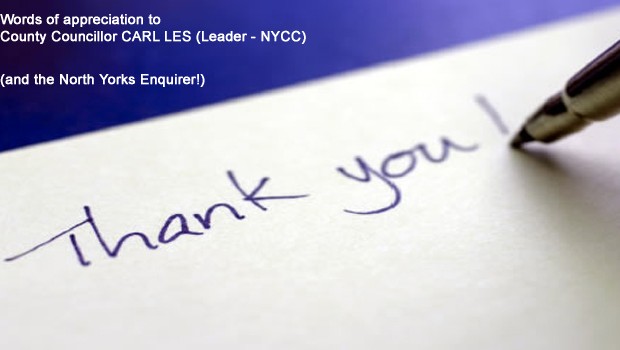 A Letter to the Editor from David HOLDEN, a reader in Bingley, W Yorks, expressing his views on the Scarborough paedophile scandal and the action of County Councillor Carl Les.

The letter recently published in the national media from the Leader of N Yorks County Council, apologizing on behalf of the relevant authorities who failed to protect those sexually abused as children during the Jaconelli era, is a welcome gesture that will mean a great deal to those who still bear the scars of their cruel treatment.

The letter is also a thoroughly-deserved acknowledgement of the public-spirited efforts of local reporters Nigel Ward and Tim Hicks, who have worked tirelessly to bring this long-running scandal into the public eye. Their persistence and courage in the face of attempts to hinder inquiries, and even to warn them off, have been exemplary.

It is also to the credit of Cllr Carl Les that he has responded swiftly, done the right thing, and done it capably and sincerely, without any attempt at stonewalling or prevarication. In this, he has acted as a real community leader and not merely as a party-politician, and I was pleased to read Nigel’s gracious acknowledgement of Cllr Les’ response (see http://nyenquirer.uk/jaconelli-an-open-letter-to-sbc-leader-derek-bastiman/).

The whole Savile affair is such a stain on our humanity that attending to it – as a long-term goal of policy, and not merely as a one-off exercise in stage-managing a major crisis of national confidence – should take higher precedence than most of the more mundane issues on which we are politically divided. The ramifications of this sordid trade in human flesh reach far beyond the mere personae of its blond, cigar-sucking Svengali and the nauseatingly obese godfathers of his Scarborough and Rochdale Chapters,

Indeed, CSA is surely one of the few issues on which a politically “bipartisan” approach is unquestionably the right way to go. It is therefore ironic that many on ‘both’ sides of the House Of Commons seem to feel so uncomfortable around this issue that they are still wishing vainly that it could just be “magicked away”! Alas, Lord Brittan has moved on, and his magic wand and fairy costume are even now being silently digested by moths in some dusty closet.

May I, in concluding, express the hope – and it is a hope shared by many – that the fine example of the North Yorks Enquirers’ investigative journalism will inspire others to work towards the renewal of a Fourth Estate which has lost its way. I think most sensible people recognize that genuine and wholesome forms of social regeneration begin near the grass roots. The future of *real* journalism belongs to those who know that a healthy media must satisfy at least two desiderata:

THERE IS NO RELIGION HIGHER THAN TRUTH