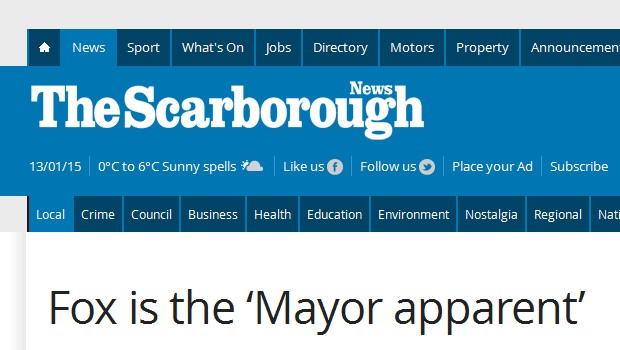 The Scarborough News has published an article on its website entitled “Fox is the ‘Mayor apparent'”, in which it confirms that, at Full Council (12th January 2015), Councillor Tom FOX, holding the sole nomination, was voted Mayor Elect for 2015/16.

The Enquirer can confirm that there was little opposition to the nomination; only Councillor Mike WARD raised challenging questions; Councillor Sam CROSS (UKIP) abstained; Councillor Johan ZEGSTROO (LibDem) voted against.

It is difficult to reconcile the overwhelming support for Tom FOX amongst Councillors (who are mandated to represent the public) with the virtually unanimous condemnation expressed by the public [Screenshot below – suitably redacted].

The talk in local political circles is that no-one seems to be able to solve the puzzle as to why Tom FOX would want to trade his largely autocratic rôle as Leader for the purely ceremonial (and less lucrative) rôle of Mayor – especially at a time when the Mayorship has been poisoned by the recent Police announcement that its most famous Mayor – Peter JACONELLI, Jimmy SAVILES’s partner in crime – was a predatory paedophile throught his adult life.

Scoff, if you will; call me a romantic – but I rather think that I might know the answer.

As Mayor Elect of Scarborough, Councillor Tom FOX will qualify for an invitation to the Queen’s Garden Party.

Granted, this it is rather pathetic – but is it not nevertheless perfectly in character? Does it not fit precisely with the petty, provincial potentate mentality? It is just pathetic enough to be true.

I leave you now with a cross-section of public opinion, which would appear to be at extreme variance with the majority of the opinions expressed on the public behalf by the democratically elected representatives – the Councillors of Scarborough Borough Council.

The conclusion must surely be that that either the Councillors are completely out of sync with the electorate – or that they simply do not give a flying flock what the public wants.