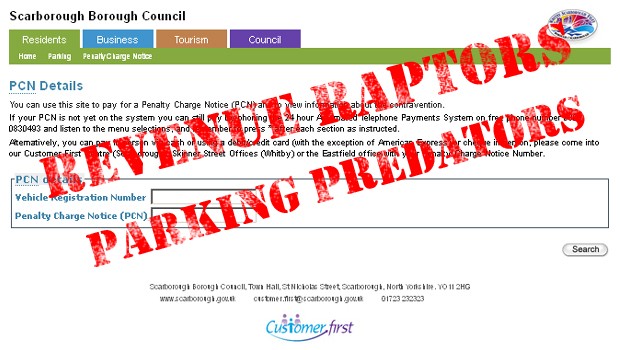 The RAC Foundation recently published the results of its nationwide survey into the practices and policies of local authorities around the country in relation to on-street parking, exposing the amount of PROFIT generated from parking charges and Penalty Charge Notices (PCNs) expressed as a net figure reached by subtracting all operational costs from the gross revenue – based on figures returned by Councils themselves to the Department for Communities & Local Government (DCLG).

In a news report on the Yorkshire Coast Radio website, the following items of information are provided:

This second gem is unsurprising.

Coincidentally, several local and regional newspapers have reported recently on the so-called ‘success’ of the Whitby Park-&-Ride facility. The most coherent of these reports appeared in the Northern Echo, from which I quote the following excerpt:

The Park and Ride was developed by North Yorkshire County Council with the aid of funding from the Government’s Local Sustainable Transport Fund with the total cost reaching £3.6m.

Across the first season, the scheme carried 131,438 passengers – or the equivalent of almost 66,000 return journeys into Whitby. The busiest period was the August Bank Holiday weekend, when almost 6,000 used the service.

Fare takings totalled nearly £120,000 while additional revenue came from the associated pay and display parking which was introduced to assist in reducing congestion, which provided a further £180,000 – all set against total operational costs of £295,000.

Please note the inclusion of the significant phrase “which was introduced to assist in reducing congestion” within that last sentence.

The Whitby Park-&-Ride finally came into being in May 2014, following sixteen years of vociferous local opposition. The various public consultations were predicated on the notion that the prime purpose of the development was to prioritize parking facilities for Whitby residents. This was untrue.

The real prime purpose of the development was to allow North Yorkshire County Council to avail itself of a large capital grant from central government.

But let us (for the moment) accept the Park-&-Ride as a fait accompli.

It is the on-street parking regime, devised specifically to generate revenue to underwrite the operational (running) costs of the Park-&-Ride – and for no other purpose – that concerns us here.

For the uninitiated, local authority parking regulation is underpinned by a series of Traffic Regulation Orders (TROs) that precisely define where and when parking is to be regulated – which streets, at what times, and for what periods of time, etc. It is upon this legal foundation that all enforcement revenue from on-street parking is derived.

However, the TROs themselves cannot be created out of thin air at the whim of the Council. The TROs are predicated on the approval, by the Secretary of State, of a legal document known as a Statement of Reasons.

This document is intended to demonstrate, to the satisfaction of the Secretary of State, the practical need for parking regulation in the designated locality, in general terms. Only when it has been approved by the Secretary of State can the TROs that define the specific road-by-road implementation of regulations come into existence, and with them, the opportunity for enforcement – with its concomitant revenue stream.

Earlier this year, I asked North Yorkshire County Council (under whose auspices the Whitby Park-&-Ride has been created, and under whose delegation Scarborough Borough Council enforces the on-street parking regime) to provide all of the legal documentation that supports the scheme, which – after much prevarication – I eventually received.

Of the prime significance is the Statement of Reasons: 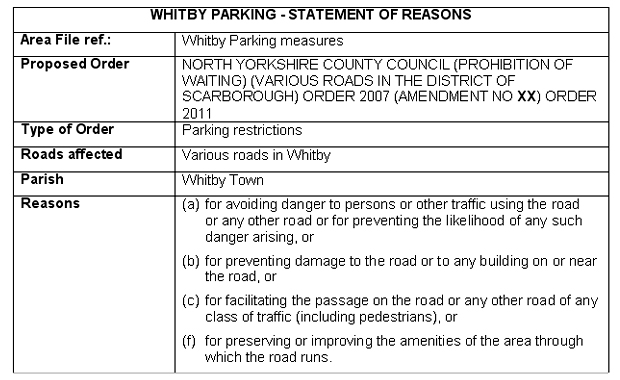 Leaving aside for the moment the fact that the document is incomplete (omitting, as it does, the Amendment No.), the four stated ‘Reasons’ deserve careful scrutiny.

Clearly, nothing within the Statement of Reasons approved by the Secretary of State provides a legitimate basis for the Traffic Regulation Orders (TROs) upon which the Enforcement Procedure for the Whitby On-Street Parking policy was predicated, and is now in operation – coining in the money.

Not one of these four reasons in any way reflects the true purpose of the application. Not one of them ‘prioritizes’ parking for Whitby residents.

The Statement of Reasons could be accurately characterised as a total misrepresentation – a blatant confidence trick amounting to a ‘blank cheque’, underwritten by the public.

The present arrangements in no way contribute to the goals asserted in the Statement of Reasons, which itself bears no relationship to the TROs which it is intended to support. The whole thing is a sham.

In other words, the TROs are open to legal challenge; the Enforcement Procedure is fatally flawed.

PCNs (Penalty Charge Notices) issued by Scarborough Borough Council in respect of on-street parking in Whitby may not be legally valid – and may never have been, since the moment that the on-street parking regulations, based on a spurious Staement of Reasons, were implemented.

As in the now famous City of York Council ‘Lendal Bridge affair’, SBC may have to repay all ‘fines’ extracted under the PCNs, since they appear to be lacking in adequate legal under-pinning, because the present TROs have been implemented under that spurious and invalid Statement of Reasons.

Setting aside the fact that the legislation makes clear that on-street parking regulation MUST address itself to the facilitation of traffic-flow ONLY, and MUST NOT be exploited as a source of revenue, it is fair to state that motorists have been deprived of their money by a system that is based on a misrepresentation (and, to that degree, is nothing short of a fraud), Scarborough Borough Council has collected the means to reimburse those motorists – and should be made to do so.

Readers may wonder how it can be that our 50 elected Borough Councillors could conceivably have failed to detect the fact that the Statement of Reasons is spurious. I believe that we can safely conclude that not all of them have failed to detect it, though most have very probably never set eyes on it – much less questioned its validity.

It may be that those Councillors who have been so vociferous in their support of the Whitby Park-&-Ride scheme and its associated on-street parking regime number amongst the very few who are aware that the Statement of Reasons is spurious, but are confident that no member of the public will ever notice it or raise a challenge. A study of Whitby Gazette articles over the past sixteen years may throw up some likely candidates.

An opportunity for the electors of the Borough of Scarborough to improve the overall quality of SBC will arise at the elections of 7th May 2015. Hopefully, they will elect Councillors with the ability and good conscience to scrutinise the Statement of Reasons and the TROs and take the necessary actions to curtail the present abuse of process. That would at least be an improvement on the present Council.

A new, previously unpublished study commissioned by a public interest ‘think tank’ includes, in its summary of Scarborough Borough Council, the following pie-chart.