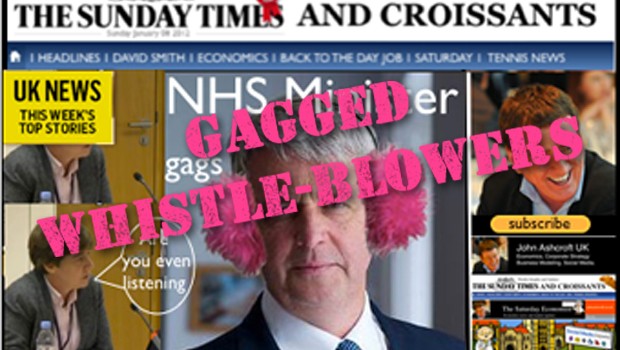 A Letter to the Editor from Marie STEPHENSON of Scarborough, who writes in support of recent articles on the subject of “whistle-blowers” whose complaints remain uninvestigated and who have received disgraceful intimidatory treatment from the very bodies whose statutory duty, under current “whistle-blower” legislation, requires them impartially to investigate complaints and to protect the “whistle-blowers”.

I read with great interest the account of Guy W and his experiences with North Yorkshire Police. This follows on from the letter reproduced from the Yorkshire Post from John Bradfield and his comments about the punishment handed out to conscientious whistle-blowers.

I and my elderly parents received an unannounced visit from two Scarborough Police Officers on Tuesday 13th November, 2012, ostensibly for the purpose of issuing me with a “cautionary order” in relation to some whistle-blowing I had been conducting regarding a Residential Care Home in Filey. This has not yet come into the public domain, due to the regulatory bodies’ reluctance to acknowledge the facts in a transparent manner.

The female Police Officer spoke in a intimidating and bullying way and was reluctant to produce her ID. She was annoyed when I insisted on taking a record of her collar number.

The male Officer remained silent throughout the visit.

The female Officer in a very blunt manner informed me that she had come to issue me with this so-called “cautionary order”, but could not clarify the origin of it or its conditions.

She started to lose her composure and told me to “Shut up!”. She demanded to know why I asked so many questions. In her irritation, she let slip one of the names of the people who had raised the “complaint”.

The female Officer then said she should not have let this name slip out. She then aggressively told me to forget that she had ever called and that there had been any dialogue between us. I could not follow this so I asked for an explanation. She told me that I was not in any trouble. So I asked again why had this visit occurred. The female Officer told me she that if I continued to ask questions, she would arrest me and take me down to the station! I left it at that.

My elderly father, who is a WW2 veteran and cancer patient, struggled up out of his chair to shake hands with the Officers, as a mark of respect.

Astonishingly, the female Officer intimated that he had tried to touch her inappropriately!

She and her colleague hurriedly left, with her repeating very sternly that I should forget that they had ever visited the house.

I told her the experience had left us traumatised and bewildered to the extent that I would be taking it further. She did not like this and mimicked my voice in a mocking manner.

Needless to say, I have pursued this rather obscure call through all the correct and appropriate channels.

Like Guy W, I have meet with being sent round in circles, given conflicting information, reluctance to produce relevant evidence and condescending pats on the head from:

and various other serving Police Officers as well as Robert Goodwill, MP.

The only thing I have managed to find out is that there is no official record of an initial complaint or the visit on any Police system.

As a family, we still remain very dissatisfied with the explanation we have received from the various Police departments and in no way feel reassured.

It is heartening to know that we are not the only residents in Scarborough who have experienced the heavy arm of the law unnecessarily – or was it an orchestrated frightening tactic that backfired?

In conclusion, the concerted efforts of the regulatory bodies to suppress my whistle-blowing from ever being heard has nevertheless resulted in an individual being handed down an 18-month prison sentence, which I believe is connected to all these events.