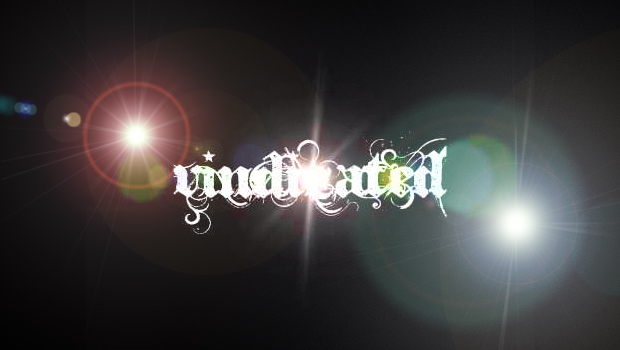 Detective Sergeant has misconduct papers served on him

NYE readers will have read with surprise tonight that a serving Detective Sergeant from North Yorkshire Police has been served with misconduct papers by the IPCC. The IPCC statement is below:

“The IPCC has an independent investigation under way into potential misconduct issues arising from the manner in which North Yorkshire police officers handled information about Jimmy Savile, and an associate, the late Peter Jaconelli. Matters under investigation by the IPCC relate to how the force handled information from a 15 year old girl in 2002 regarding Savile, and how the force treated two disclosures made by a serving prisoner about Jaconelli in December 2008 and January 2009. One serving detective sergeant has so far been served with a misconduct notice to advise him his conduct is subject to IPCC investigation. The officer has been interviewed by an IPCC investigator recently.

IPCC deputy chair Sarah Green said: “The investigation is examining whether the North Yorkshire Police response to the disclosures was in accordance with national and force policies on crime recording, intelligence handling and dealing with victims of sexual abuse.”

This investigation follows a referral from North Yorkshire Police in April this year which included whether any information it held on record about Savile or his known associates was properly and comprehensively disclosed to Her Majesty’s Inspectorate of Constabulary (HMIC) when it, and other forces, were asked to do so by HMIC in December 2012 and again by the IPCC in May last year. After assessment by the IPCC those matters have been sent back to the force to deal with.

North Yorkshire Police has an ongoing investigation into historical sexual abuse [Operation Hibiscus] for which it has previously asked people from the Scarborough area to come forward with any information.” 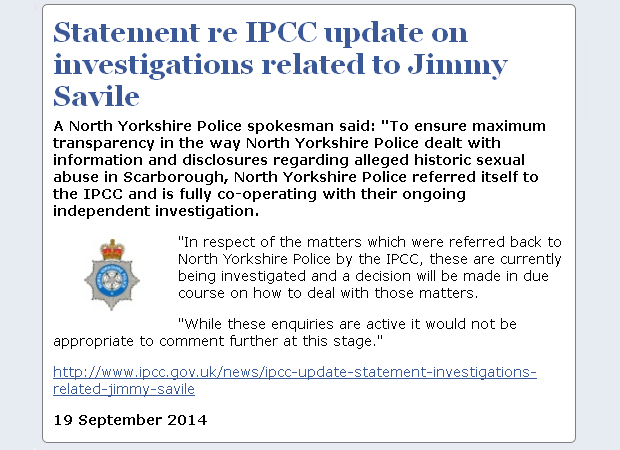 Whilst the statement explicitly concedes that Jaconelli and Savile were offending together in a ring in Scarborough as the NYE has always maintained, what the IPCC statement does not say is that:

North Yorkshire Police was responsible for the four most important failures to arrest Savile and the rest of the Jaconelli ring. These were:

This consistent failure led to misery for thousands of children over many years.

Initially it released a statement:

i.e. that he did not live in Scarborough, although he did and NYP knew that he did.

This was clearly a blatant lie.

Nevertheless, on this basis North Yorkshire Police were improperly excluded from the HMIC, Home Office and IPCC investigations into Savile and were not mentioned in the statement by the Home Secretary on the failure of the British Police Service to arrest Savile to Parliament on the 12th of March 2013: 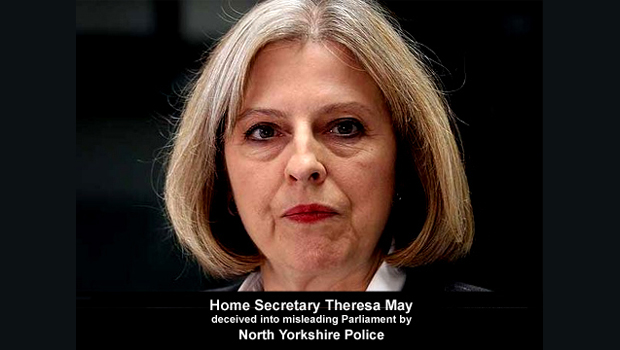 Consequently, it is now clear that the Home Secretary was deceived into misleading Parliament in her statement.

On the 10th and 11th of October 2012, North Yorkshire Police received two separate allegations of sexual offences by Savile. It published statements to the effect that this was the first it had known of him and that all enquiries should be directed to the Metropolitan Police:  http://www.northyorkshire.police.uk/9645

Subsequently, North Yorkshire Police have confirmed that this statement was also a lie.

Cover-up #3 occurred following correspondence to the IPCC from the NYE team, the IPCC accepted that the concerns we had raised were valid and directed North Yorkshire Police to conduct an investigation to ascertain if there were any conduct matters that needed to be reported to the IPCC. 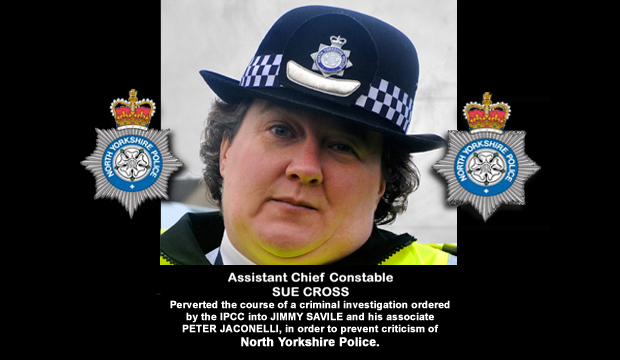 The resultant investigation was conducted by Assistant Chief Constable (formerly Temporary Deputy Chief Constable) Sue Cross and took her less than two weeks. She ignored all the evidence to conclude that North Yorkshire Police had no idea about Savile, Corrigan and Jaconelli (although every parent, teacher and schoolboy in Scarborough and Whitby was aware of his offending).

BBC ‘Inside Out’ Investigation here.

As a result of the BBC investigation above, it emerged that Cross did not bother even to interview any of the witnesses that had come forward. It has now emerged that in fact North Yorkshire Police admits it had current intelligence on Savile from 2002 and on associate Jaconelli in 2008 and 2009 at a time when it was aware Savile was the subject of a criminal investigation for serious crimes by Surrey and Sussex police. This is in addition to the other intelligence it had gathered, some of which was revealed by the BBC, which it has not yet admitted.

So North Yorkshire Police ignored the facts to exonerate itself from any responsibility or knowledge about the Jaconelli paedophile-ring.  In short, the Cross report, which was of course instantly accepted by the IPCC, HMIC and Home Office, was a whitewash.

Deputy Chief Constable Madgwick then issued a triumphant statement confirming that the North Yorkshire Police were exonerated by the IPCC. 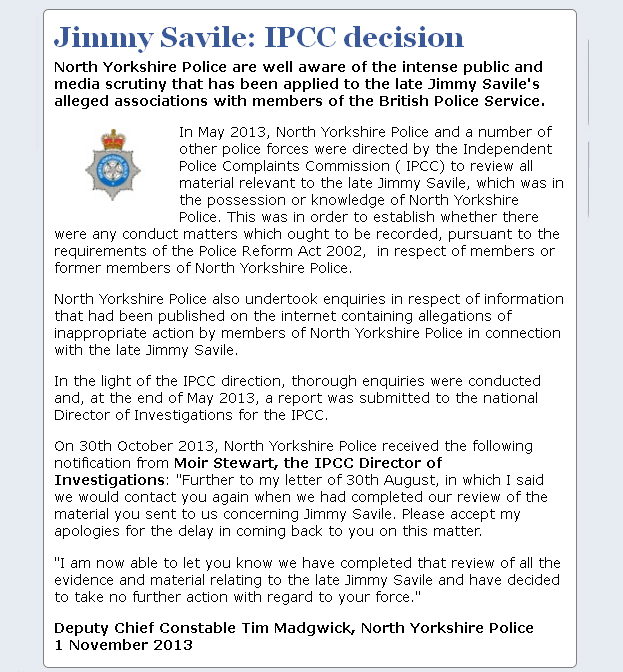 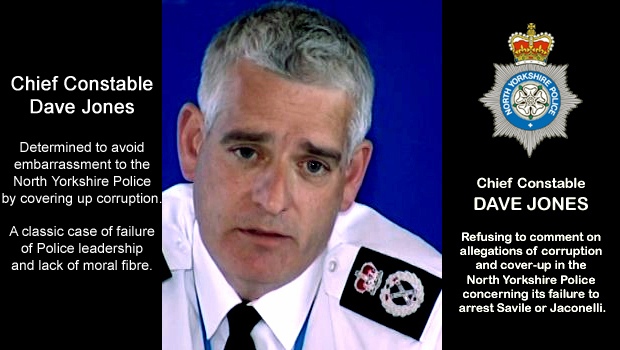 Although the Chief Constable has been asked to intervene and withdraw the threat of arrest, he has not done so, thereby tacitly approving of Deputy Chief Constable Madgwick’s actions to prevent the truth from emerging.

Following the BBC ‘Inside Out’ documentary (above), North Yorkshire Police and the Police & Crime Commissioner for North Yorkshire were forced to refer themselves to the IPCC – thereby essentially conceding that the allegations made by the NYE Team which I am being threatened with arrest over were accurate:  http://www.northyorkshire.police.uk/13356. It also initiated the Operation Hibiscus investigation into Savile, Jaconelli, Corrigan and associates:  http://www.northyorkshire.police.uk/13377

NYE has co-operated with Operation Hibiscus, which is led by Detective Superintendent Steve Smith.  Both the NSPCC and H.O.P.E. have emphasised in their coverage of child abuse how good it is that as a result of media coverage, more witnesses are coming forward everywhere to bring more evidence of offending.  Operation Hibiscus started in April 2014 and so many victims and witnesses have come forward, that it is still ongoing with no end in sight.

This has led to the bizarre situation where Chief Constable Jones and Police & Crime Commissioner Mulligan have jointly confirmed an appeal for witnesses to the offences that the NYE has revealed, whilst simultaneously supporting the threat to arrest the first witness that came forward – reducing Operation Hibiscus to a farce. 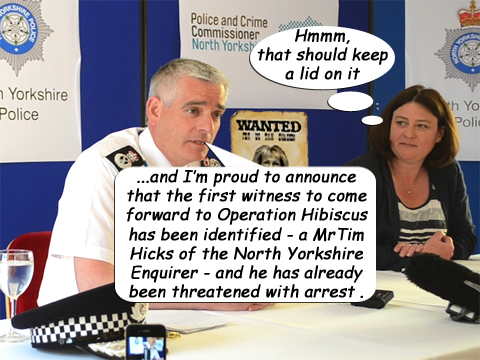 I started this article by saying that NYE readers will be surprised to read that a lowly Detective Sergeant -whose alleged misconduct pales into insignificance compared to that of his senior officers- is to be the subject of misconduct proceedings.  This is because it is so obvious that the Chief Constable, Deputy Chief Constable and Assistant Chief Constable have committed serious acts of misconduct, that it is incredible that a lowly Detective Sergeant has been offered up as a sacrificial lamb, whilst the Chief Officers –whose do not have the integrity or honesty to admit their misconduct- fly above it all.  Completely immune to any censorship or criticism.

It does however explain why they were so determined to prevent the truth from coming out.  They were trying to protect a serving police officer.  This is one of a number of cases of complainants being threatened with arrest by North Yorkshire Police when they come to close to the truth of a scandal that NYP wants buried.

It is essential in a democratic society that we have a free press which is not under Police control.  It is also essential that Chief Police Officers show leadership and integrity, when faced with misconduct.  On this basis the North Yorks Enquirer has now written to the Police & Crime Commissoner for North Yorkshire requesting that charges are preferred against Madgwick, Jones and Cross.

We will update our readers on the outcome.