As a result of a string of recent events, we are now issuing an update to the NYE article on the Rotherham child abuse scandal, which is available by clicking the link below:

The string of events is as follows:

A former Rotherham care home worker has told the BBC how girls as young as 11 were openly groomed and abused with the full knowledge of the police.  Full BBC report here:

Likewise, Savile and Jaconelli, would pick up youths from the former burger bar in Whitby in full view of the Police Station and take them away in Savile’s Rolls Royce to be abused and paid off.  Jaconelli’s activities abusing boys in his ice-cream parlours and Judo Club were well known locally and must have been known to North Yorkshire Police.  He and Savile were also rapists.  Yet nothing was done.  As with the Rotherham scandal, North Yorkshire Police claimed that intelligence and evidence was lost, although in fact it existed and there was no possible excuse for failing to arrest them.

Letter by Mr John Mann MP to the Home Secretary.

Mr Mann is the Labour MP for Bassetlaw in Rotherham.  As reported in the article above, he has written to the Home Secretary asking for all those who did not take action over the Rotherham child sexual abuse scandal to be prosecuted for misconduct in public office.

It is a good letter and I have reproduced it in full below:

Re: Misconduct in Public Office

I am writing to you to request that you refer an investigation into a potential charge of misconduct in public office in relation to the Rotherham child abuse scandal to a police force other than South Yorkshire.

The Crown Prosecution Service advice on their website states that the offence is committed when a public officer acting as such wilfully neglects to perform his duty and/or wilfully misconducts himself to such a degree as to amount to an abuse of the public’s trust in the office holder without reasonable excuse or justification.

The full information can be found here:

The report by Alexis Jay OBE states in great detail that during his time as the portfolio holder responsible for children’s services Shaun Wright received three separate reports concerning child abuse and failed to act on them. These reports are stated on pages 10 and 11 of the report and they state:

A new Executive Director of Children and Young People’s Services was appointed. Shaun Wright, Cabinet member, received the annual report on the protection of young people in Rotherham from sexual exploitation. He called for a further report on the budget of Risky Business and the likely future pressures on the project. He

Shaun Wright, Cabinet member, received a report by the Director of Targeted Services on the progress of arrangements to protect young people from sexual exploitation.

The Crown Prosecution state that “the wilful neglect or misconduct can be the result of a positive act or failure to act.” It is clear that as a democratically elected councillor with the specific responsibility for children’s services Shaun Wright failed to act despite three separate warnings.

Page 111 of the report details how the issue of CSE was never discussed in the Labour Group until 2012 which is simply staggering. Not only did Shaun Wright fail to act, he failed to inform other members of his own party of the serious problems of young girls being abused, raped and beaten on a systematic basis.

“Interviews with senior members revealed that none could recall the issue ever being discussed in the Labour Group until 2012. Given the seriousness of the subject, the evidence available, and the reputational damage to the Council, it is extraordinary that the Labour Group, which dominated the Council, failed to discuss CSE until then.”

This is of huge significance, because it was a private and confidential monthly opportunity, behind closed doors, to raise the issues concerned and critically to bring them to the detailed and precise notice of other councillors. Of similar significance, there appears to have been no such discussion at formalised official council meetings, including in confidential sessions. These omissions demonstrate a potential wilful neglect of public duties by senior councillors and officials.

It is my view that the facts provided in the Alexis Jay report provide evidence of the potential for wilful neglect of duty by public officials, including the current South Yorkshire police and crime commissioner Sean Wright.

Member of Parliament for Bassetlaw

Who was in charge and could potentially face prosecution?  Full BBC report here.

Chief Constable David Crompton of South Yorkshire Police has personally issued a statement confirming that if police officers have done things wrong they will be disciplined.

Calls for a full enquiry by Mr Ed Milliband

Labour Party leader Mr Ed Milliband has called for a full investigation in to the Rotherham child abuse scandal: 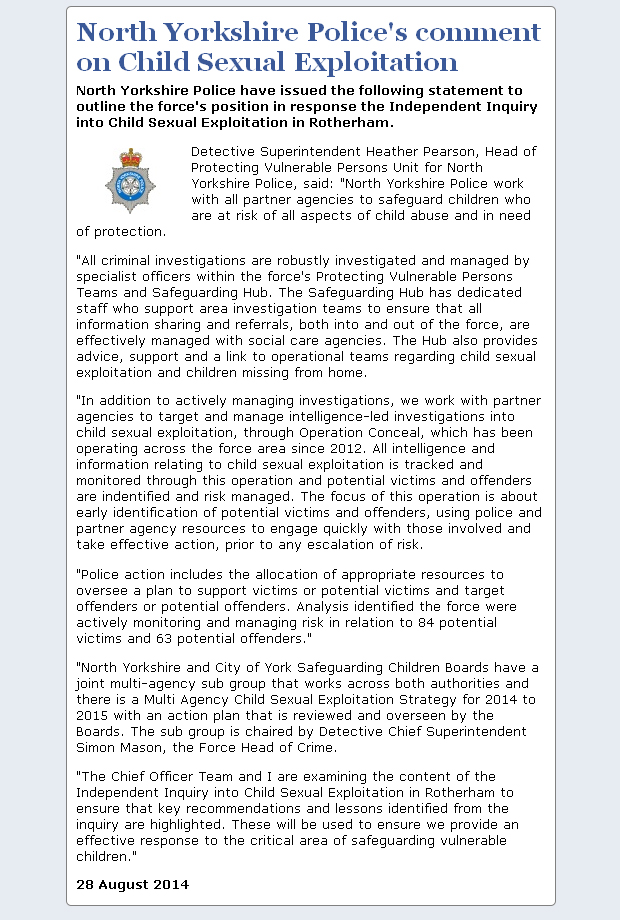 It does not mention the Jaconelli and Savile scandals or any intention or possibility of Police Officers from North Yorkshire Police being arrested or facing disciplinary action over their failure to arrest Jaconelli and Savile, or the subsequent cover-up.  Nor does it mention that this is the same Detective Superintendent Heather Pearson that threatened a local journalist with arrest (the CPS confirmed there was no case to answer) and demanded that he remove all articles on North Yorkshire Police from the internet.

Please note the absence of any apology or statement of regret to Jaconelli and Savile’s victims, or any admission of failures by his Force.

Compare this to the full and contrite statement issued by Chief Constable Crompton, who admitted that there had been failings and that those Police Officers who had not performed their duties properly would face disciplinary action.

This is all the more concerning given that the situation with the Scarborough-based ring was in some respects much worse than the scandal in Rotherham: 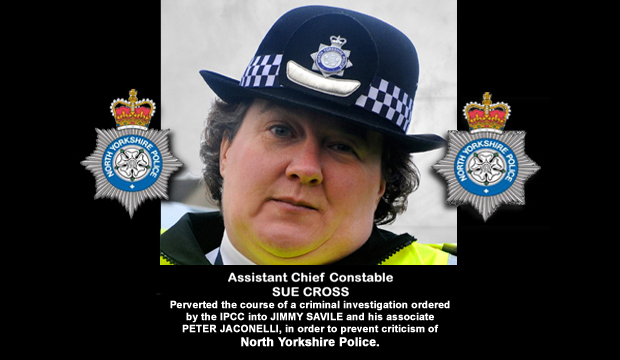 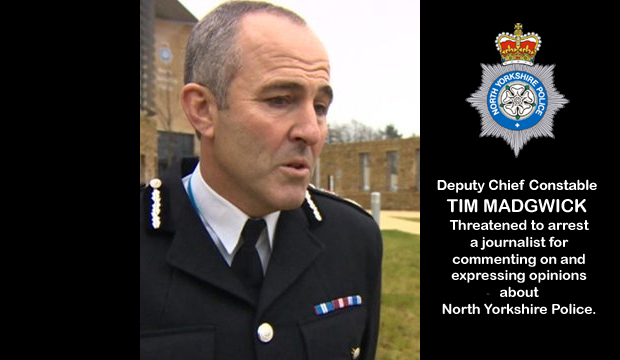 Although Jaconelli and Savile were dead long before Mr Jones was appointed as Chief Constable, he has command responsibility for North Yorkshire Police and the actions of his officers in response to the Scarborough and Rotherham scandals.  He has not taken any disciplinary action against Assistant Chief Constable Cross or Deputy Chief Constable Madgwick and he has refused to withdraw the threat to arrest a NYE journalist for criticising North Yorkshire Police over its failure to arrest Savile and Jaconelli; although he has been asked to.

Worse, Chief Constable Jones has not made any expression of regret over the failure to arrest Jaconelli and Savile to their victims, acknowledges no systemic failings by his force and has given no assurances that those who failed to execute their duties properly will face disciplinary action.  On the one hand, Chief Constable Crompton and Superintendent Harwin of South Yorkshire Police had the strength of character to face the public on camera and admit honestly and publicly to the failings of their force.  When the BBC ran its exposé of Jaconelli, which also exposed the fact that Assistant Chief Constable Cross had not interviewed any of the witnesses before she dismissed the allegations against Jaconelli.  Having been found out in misconduct and a blatant cover-up, no member of North Yorkshire Police had the balls to appear on camera and give a comment.

The North Yorks Enquirer supports Mr John Mann’s request to Home Secretary Theresa May that Police from another Force should investigate whether a case of misconduct in public office could be brought against those that deliberately and knowingly failed in their duty to protect children.  This applies whether the children were in South Yorkshire or North Yorkshire.

When things go wrong, the duty of a Chief Police Officer is to admit that straight away, take action against those responsible, identify the failures and improve procedures and policy, to ensure it doesn’t happen again.  South Yorkshire Police have realised this and responded appropriately, but Chief Officers of North Yorkshire Police have carried on in the same old way supressing evidence, intimidating witnesses and ignoring criticism, to defend its public reputation and actions no matter what. As in Rotherham, serious offences of misconduct in public office and harassment have obviously been committed by police officers in North Yorkshire, including Chief Police Officers.