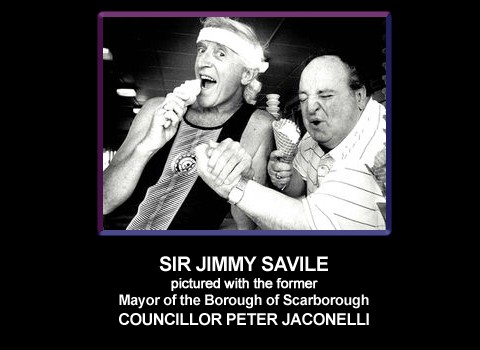 Jimmy Savile and Peter Jaconelli:  The dangers of misguided loyalty

Following on from the stripping of all civic honours from Peter Jaconelli and the disgracing of his name and memory, as a result of a long campaign by Real Whitby contributors– despite a sustained campaign of intimidation from Scarborough Borough Council and North Yorkshire Police – to expose the truth of his depraved double life and how he was protected by the very organisations that were charged with preventing his offending: 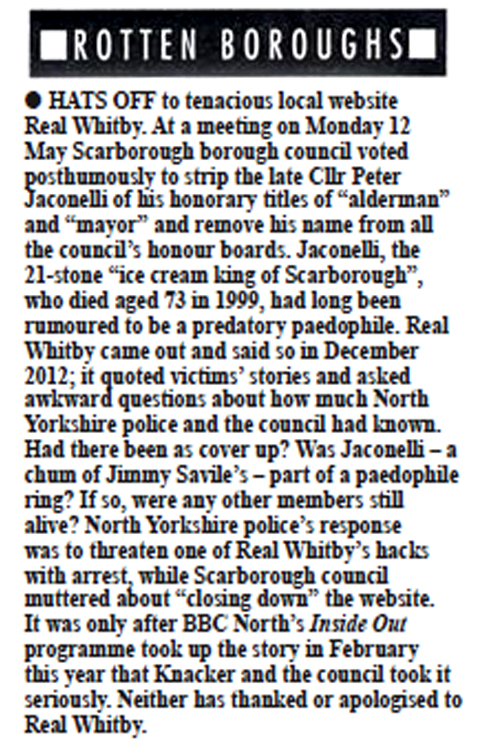 Nevertheless, even despite the evidence that has emerged, Real Whitby journalists have been collectively amazed at the support this evil paedophile and serial rapist can still command from some people.  For instance, a local Councillor spoke out publicly to defend Peter Jaconelli at the Scarborough Borough Council meeting which confirmed Jaconelli was a paedophile.

The Scarborough News has recently printed a letter from one of Jaconeli’s victims in which he confirms that Jaconelli “once gave me a lift and put his hand on my knee, but when I made it patently clear to him that I was not interested, he dropped me off, and I profited to the tune of ten bob, which was a lot of money in those days”.  Incredibly, this man does not appear to understand the gravity of what happened, or that he himself is a victim of Jaconelli’s abuse.

He then goes on to deny that there is any evidence of any abuse, (although it has been confirmed by many witnesses, the Police, the charity Healing Our Past Experiences (HOPE), Real Whitby and SBC) and still defends Jaconelli:

“Peter was a fine mayor of this town, and I for one will not have his name sullied by tittle tattlers, who have nothing better to do than cause trouble and cast aspersions through their inadequacies to come to terms with their own bigoted preferences.  I always found Peter Jaconelli a gentleman, and I spit on those who haven’t the guts to come forward and back up their allegations with factual evidence.”

To be clear.  Jimmy Savile raised millions for charity.  Peter Jaconelli was a man of great personal ability, charm, an exceptionally good and hard-working Ward Councillor and unquestionably did a lot of good for Scarborough.  As shown in his 1999 Guardian obituary , the Councillor’s speech and the above supportive remarks.  However, both men were nevertheless predatory paedophiles and rapists, who undertook these commendable activities, not for the public good, but to provide a cover and protection for their offending.

Concerning Jaconelli; his offending was NOT limited to sexual touching of boys at the lower end of the sexual offences scale.  Jaconelli’s offending was of the gravest, most serious, violent, sustained, organised and depraved nature at the highest level of sexual offending.

Real Whitby has held this back until now, because of the deeply offensive nature of the allegations and out of concern for the reputation of the Jaconelli family. But in order to draw a line, and hopefully to deter any further misguided and sentimental defences of the indefensible, we will now publish the evidence of the level and type of Jaconelli’s offending we have collected so far.

Peter Jaconelli abused schoolboys and corrupted them into prostitution

According to Witness M, Jaconelli offended openly in joint enterprise with Jimmy Savile who was also a serial rapist and paedophile. Jaconelli used Savile to procure victims for him by enticing them into Savile’s pink Rolls Royce in front of the burger-bar, in clear sight of the Police Station.  They would then be driven away, abused and paid off.

Savile brought patients from Rampton to visit Jaconelli twice.  On one occasion they were given money, then free food and free ice-cream at one of Jaconelli’s ice-cream parlours.  This aspect of his activities is still under investigation.

The Scarborough News recently ran an article in which it quoted Ms Pauline Carruthers, founder of HOPE in which she confirmed that eleven victims of Jaconelli had come forward to her, some of whom had confirmed that Jaconelli had raped them.  Real Whitby has also received an allegation of rape made against Jaconelli by a witness who alleged Jaconelli raped a foreign national who worked as a waiter in Scarborough, who left the country after the incident.

Remember, Jaconelli was twenty-one stone, physically fit and a black belt in Judo (see the BBC footage above of him flooring former wrestler Jimmy Savile to see how formidable a fighter he was).  He was wealthy, articulate, highly influential and had the local Council and Police in his pocket.  Hence the reason his victims understandably chose to say nothing. He also paid off victims and witnesses to keep quiet, as confirmed by the correspondent to the Scarborough News, and others.

Even if they had spoken out (as several had the courage to do), nothing would have been done by North Yorkshire Police, which knew all about Jaconelli and his offending, but covered it up.  Again this was perfectly brought out by Chris Jackson in the BBC “Inside Out” documentary above.

The public interest:  This must never happen again

The Scarborough News states that kids knew what Peter Jaconeli was like.  This is undoubtedly true.  Everybody knew.  The Police, the SBC Education Department, parents, Governors, teachers, Councillors and schoolboys.  Some people did courageously blow the whistle, yet nothing was done.  Partially out of fear, partially out of respect for his achievements, status, wealth and influence locally, Jaconelli was protected by North Yorkshire Police for years.

Nevertheless, both Scarborough Borough Council and North Yorkshire Police were ruthlessly determined not to admit to any wrongdoing.  Hence the now completely discredited Cross report and the onslaught of intimidation from the Council and the Police, that Real Whitby contributors have had to endure in order to bring the truth out into the open. 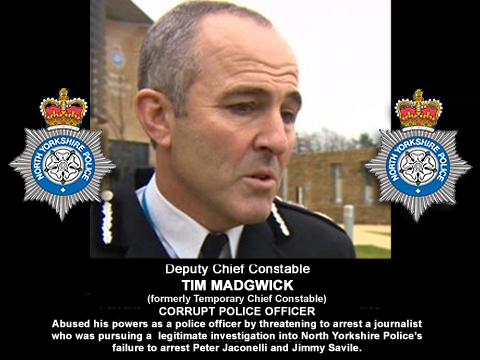 We are all supposed to be equal under the law.  Savile and Jaconelli were put above the law by North Yorkshire Police because of the charitable and civic work they performed.

Between Savile, Jaconelli and the other nine plus people we believe operated in the ring with them in Scarborough, we suspect that their victims ran into their thousands over the period 1947 – 2007.  This must override any of the good that Savile and Jaconelli undoubtedly did.  Otherwise they are permanently elevated to being above the law, because of their status, as they were in life.

It is absolutely essential that this is exposed publicly and not allowed to be swept under the carpet.  Not to needlessly damage reputations, cause distress to Jaconelli’s friends, family and victims, or bring Scarborough Borough Council or North Yorkshire Police into even further disrepute.  But to ensure that the next time the authorities are tempted to conduct a cover up they will consider that the truth will inevitably come out and will come back to haunt them, so this never happens again.

In the internet, social media and citizen journalists like Real Whitby have ensured that the days of the police being able to contain a scandal like Jaconelli are long gone.  Following on from Councillor Mike Ward’s article Is it so wrong to say thank you or sorry and the excellent work Nigel Ward has done assisting Operation Hibiscus, (the fourth North Yorkshire Police investigation into Jaconelli and Savile, which appears to be proceeding very well) we hope that the Police Officers that read this article will take the time to consider if participating in a cover up out of misguided loyalty to the force’s reputation – instead of the interests of justice and the public interest – is worthy of them, or possible any more.

We hope our investigation will help prevent another policing failure which allowed Savile and Jaconelli to offend openly together for fifty years.

We also hope that the exposure of Jaconelli and those that protected him will help the victims come to terms with their experiences, and that those who still have misguided feelings of loyalty to Jaonelli will consider the facts above and reconsider their views on this.

For more information about HOPE and its services visit www.hopegroups.org.uk or call 01723 381811.