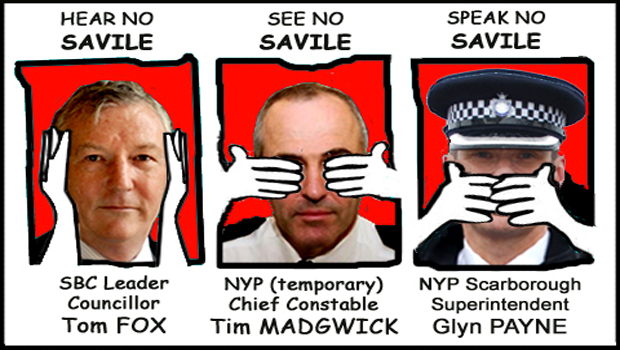 The Rotherham child-abuse scandal.  Some questions for North Yorkshire.

North Yorks Enquirer readers, being intelligent and enquiring will already be fully aware of the incredible and deeply concerning the child sexual abuse scandal in Rotherham.

An inquiry has confirmed that at least 1,400 children in the town were subjected to gang rapes, grooming, trafficking and other sexual exploitation on a wide scale between 1997 and 2013.  The inquiry team found examples of “children who had been doused in petrol and threatened with being set alight, threatened with guns, made to witness brutally violent rapes and threatened they would be next if they told anyone“. Full details Full BBC report here.

Key findings of the report:

Pressure grows on Mr Sean Wright, the Police and Crime Commissioner for South Yorkshire to resign, following the horrific revelations.   Mr Wright was the Labour Councillor in charge of children’s services at Rotherham Council from 2005 to 2010. He also sat on the Authority of South Yorkshire Police, when both organisations knew about the level of child sexual exploitation, but chose not do anything about it.

“I believe it is only right that as leader I take responsibility for the historic failings described so clearly.”  He then resigned, an honourable and appropriate act.

Although five men from the town were jailed for sexual offences against girls in 2010, the report said police “regarded many child victims with contempt“.

“Firstly I’d like to start by offering an unreserved apology to the victims of child sexual exploitation who did not receive the level of service they should be able to expect from their local police force.”  Encouragingly, Chief Superintendent Harwin had the honesty and integrity to state “We fully acknowledge our previous failings.”

Labour backbencher John Mann MP is to write to Home Secretary Theresa May asking for the Police to investigate whether a case of misconduct in public office could be brought against Mr Wright and others involved in the failure to protect children in Rotherham.  This will no doubt include Councillors, Council Officers and Police Officers.  Mr Mann said the inquiry should not be carried out by South Yorkshire Police, but by another force.  The North Yorks Enquirer supports Mr Mann’s intervention.

The implications of the Rotherham scandal for North Yorkshire Police and Scarborough Borough Council.

This has some major implications for North Yorkshire Police and Scarborough Borough Council.

Regular readers of the North Yorks Enquirer will be aware that the Mayor of Scarborough Peter Jaconelli led a paedophile ring which operated openly in Scarborough and Whitby from about 1947 until his death in 1999, and beyond.  It included Jimmy Savile, but because of Jaconelli’s position as Mayor of Scarborough, Scarborough Borough Councillor, North Yorkshire County Councillor, prominent local businessman, School Governor and leader of the Ippon Judo Club, North Yorkshire Police and the Council protected him and his entourage.  Complaints were supressed or ignored and he was allowed to offend with impunity.  As a result of his close connections with Jaconelli, Savile was also protected by North Yorkshire Police.

Savile and Jaconelli regularly cruised over to Whitby in Savile’s pink Rolls Royce to pick up young people of both sexes from the burger bar overlooked by the Police Station.  They then took them away to be abused.  Journalists from the North Yorks Enquirer and the Scarborough based charity HOPE (Healing Our Past Experiences) have had credible reports of rape and multiple allegations of children being sexually abused at Jaconelli’s Ice Cream Parlours and his Judo Club.  Jaconelli introduced Savile to some of the schools; it has emerged that children were enticed into prostitution,  over the full lifetime of the ring’s existence which we believe to be 1947 to about 2009, there were thousands of victims.  This was common knowledge in Scarborough and Whitby.  The Council and North Yorkshire Police must have known, but did nothing. BBC investigation into Jaconelli here.

The Jaconelli child sexual abuse scandal of the same nature and gravity as that which occurred in Rotherham, with many common features and many more victims.

Referring to the Rotherham scandal, former children’s minister Tim Loughton told the BBC’s Newsnight that it was a “common theme” in sex abuse scandals that “nobody pays the consequences”.  This is clearly the experience in North Yorkshire from the Jaconelli Scandal.

North Yorkshire Police was responsible for the four most important failures to arrest Savile and the rest of the Jaconelli ring:

1. The failure by Police Officers that served in Scarborough and Whitby to arrest Jaconelli, which would surely have led the Police to Savile.

2. The failure by Police Officers that served in Scarborough to investigate complaints received by the police about Savile in Scarborough from at least the 1970’s until his death in 2011, which would have led to his arrest, prevented decades of offending and protected hundreds of victims.

3. The failure to arrest Savile as a result of the allegation North Yorkshire Police now admits it received in about 2003 or even earlier and it has been alleged were investigated during the 2003 investigation into Rutter and White when two witnesses were questioned about Savile, Jaconelli and another man.

4. The failure to pass on the intelligence to Surrey Police in 2007 that North Yorkshire Police now admits it had in at latest 2003, which ensured the failure of the Surrey investigation.

This consistent failure led to misery for thousands of children over many years.  However, instead of North Yorkshire Police coming forward to openly admit responsibility and apologise for its failure – as South Yorkshire Police did – North Yorkshire Police denied that Savile had any connection to Scarborough.  Then, when forced by the NYE team to admit this was inaccurate and open an investigation, it tried to cover up the rampant corruption that had occurred in Scarborough and Whitby Police that allowed this vicious ring to offend with impunity, by getting Assistant Chief Constable Sue Cross to issue a report whitewashing its part in the affair .  NYE investigation here

As a result of the NYE investigation, North Yorkshire Police was eventually forced to admit that the NYE allegations were all correct. http://nyenquirer.uk/jaconelli-nyp-finally-climb-down-and-own-up-in-part/

However, unlike Rotherham, there has been no apology and no resignations, nor have any Police Officers been charged, perfectly vindicating the remarks by Mr Loughton above.  Instead: 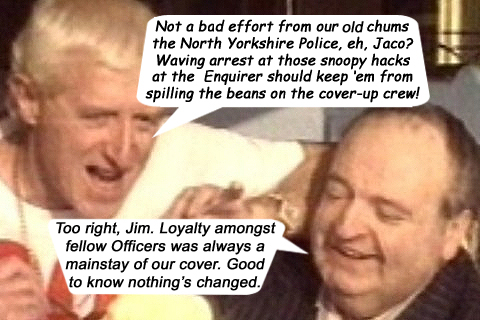 Chief Constable Jones has issued the following statement (in full) about the Jaconelli ring:

Please note the absence of any apology or statement of regret to Jaconelli and Savile’s victims, or any admission of failures by his force.  Compare this to the full and contrite statement issued by Superintendent Harwin of South Yorkshire Police. 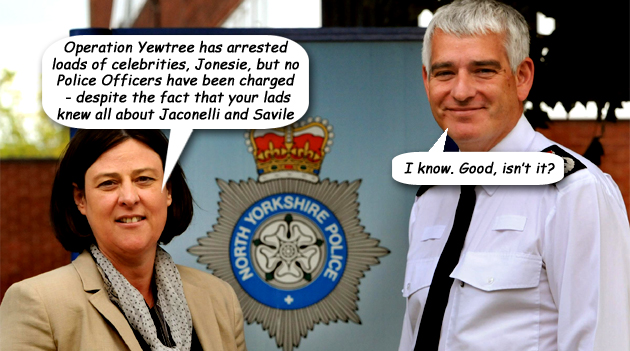 Having issued this statement effectively vindicating the allegations made by the North Yorks Enquirer, Deputy Chief Constable Madgwick then wrote on Force headed paper, again threatening to arrest the journalist that had revealed the extent of North Yorkshire Police’s failure to properly investigate the Jaconelli ring, if he continued to comment or express opinions on North Yorkshire Police.  This was obviously done with the approval of Chief Constable Jones.  And this was despite the fact that the North Yorks Enquirer has provided information and assistance to Operation Yewtree and Operation Hibiscus.

The Chief Constable clearly has no intention of being open and getting to the truth.

Charges to be preferred?

As a result of the existence of a free press and access to social media and the internet, it is no longer so easy for the authorities to supress information and cover up incompetence and misconduct.  Some would say it is now impossible.  Consequently a succession of scandals involving Police corruption have been exposed to public scrutiny.  In the past they would never have come to light.  This is a healthy development and in the long term wider interests of the Police Service, even if it is embarrassing to the individual Force.  Yet under the leadership of Chief Constable Jones, North Yorkshire Police is abusing Police powers to supress legitimate public comment it finds uncomfortable.

Public confidence in the Police is at an all-time low.  If it is to be restored, North Yorkshire Police needs to adopt an open and responsive approach to public concern.  To achieve this we need more officers like Chief Superintendent Harwin and none like Chief Constable Jones, Assistant Chief Constable Sue Cross and Deputy Chief Constable Tim Madgwick, who abuse Police powers to protect the Police instead of protecting the public.  Their day is over and they should be removed on the basis of misconduct and lack of public confidence, in the wider interests of the Police Service and the public.

When things go wrong, the duty of a Chief Police Officer is to admit that straight away, take action against those responsible, identify the failures and improve procedures and policy, to ensure it doesn’t happen again.  South Yorkshire Police have realised this and responded appropriately, but Chief Officers of North Yorkshire Police have carried on in the same old way supressing evidence, intimidating witnesses and ignoring criticism, to defend its public reputation and actions no matter what.  As in Rotherham, serious offences of misconduct in public office and harassment have obviously been committed in North Yorkshire.  Following on from the example shown at Rotherham, it is to be hoped that those police, Councillors and Council Officers who covered up for Jaconelli and Savile at the time, and those who subsequently tried to prevent the truth coming to light will be brought to justice.

They are from Yorkshire, not Tokyo and will not therefore commit Hari Kari.

The North Yorks Enquirer therefore supports Mr John Mann’s request to Home Secretary Theresa May that Police from another Force should investigate whether a case of misconduct in public office could be brought against those that deliberately and knowingly failed in their duty to protect children.  This applies whether the children were in South Yorkshire or North Yorkshire.