Readers may already be aware of the breaking news story about the North Yorkshire Police press release regarding the conclusion of Operation Hibiscus – its investigation into the allegations against Jimmy SAVILE and Peter JACONELLI. After having watched the Sky News report, I was interested to read the Sky News textual coverage, by North of England correspondent Gerard TUBB:

A police force has apologised for letting prolific sex offender Jimmy Savile slip through their net by not properly investigating him while he was alive.

North Yorkshire Police has admitted it missed opportunities to act and let down people who reported abuse by the disgraced entertainer and another man in Scarborough.

Assistant Chief Constable Paul Kennedy apologised to thirty-five people who say they were abused in Scarborough between 1958 and 1998 by Savile or his friend Peter Jaconelli, a former mayor of the town.

Two of the alleged victims say both men attacked them.

“On behalf of North Yorkshire Police I am sorry, I am truly sorry we did not respond more effectively, we did not investigate those allegations early on,” he said.

Mr Kennedy said if Savile and Jaconelli were alive they would be arrested on suspicion of child sex offences ranging from indecent assault to rape.

Jaconelli died in 1999, and Savile died in 2011 before being exposed as a prolific offender who abused at least 500 children according to the NSPCC.

After Savile’s crimes were made public campaigners and bloggers on the Yorkshire coast pressured the police over their claims that they had no knowledge of complaints against either Savile or Jaconelli when they were alive.

When several men came forward in March 2014 to say they had been abused by Jaconelli the force referred itself to the Independent Police Complaints Commission and began an investigation.

Nigel Ward from the North Yorks Enquirer website (http://nyenquirer.uk) welcomed the apology but said more needs to be done.

“The only way to get to the bottom of this now is to have a full scale public enquiry and I would welcome that because I think there are a lot of people who have been culpable in terms of covering up and making it possible for these terrible people to get away with these offences,” he said.

The IPCC has recently quizzed an unnamed serving detective sergeant from North Yorkshire Police as part of an ongoing investigation into potential misconduct over how information about Savile and Jaconelli was handled.

Both Savile and Jaconelli are buried in Scarborough’s Woodlands Cemetery, where Savile’s grave is unmarked after his headstone was removed in 2012 while Jaconelli’s prominent headstone records him as Alderman Peter Jaconelli.

Scarborough Council, which is led by Tom Fox, a former Scarborough police commander, stripped Jaconelli of his civic honours when the extent of the complaints against him were acknowledged earlier this year.

To readers who are familiar with the North Yorks Enquirer’s two-year-long coverage of the SAVILE/JACONELLI paedophilia connection – including the outcome of a nine-month long investigation by the BBC Inside Out JACONELLI coverage (which fully vindicated our conclusions and was directly responsible for the instigation of Operation Hibiscus) – that final sentence of the Sky News report will not give the impression of a rather curious non sequitur, as it must appear to less well-informed readers.

Let us take another look at it:

Perhaps the wider world will now see the significance of Scarborough Borough Council’s desperate (but ultimately futile) efforts to take down our web-site – within weeks of Councillor Geoff EVANS making his allegations of cover-up against the Council and the Police, and thus lending the weight of a victim (himself) to the allegations that we had been publishing. For his courage, Geoff EVANS received a verbal thrashing from Leader Councillor Tom FOX for “opening his big mouth” and was effectively forced out of the Council.

The vast majority of the criticism of Councillor Tom FOX published on the North Yorks Enquirer has been directed at his performance as a Borough Councillor, with relatively few references to his Police career.

But I am reminded now of one particular reference to his Police career, first published on 29th November 2013 – and therefore now time-barred and beyond the scope of a libel action. I am referring to allegations made by a member of the public in the comments section of an article of on the Real Whitby web-site.

I reported the appearance of these allegations to SBC Director of Legal & Democratic Services and Monitoring Officer Lisa DIXON in December 2013. No response.

I reported it again to Lisa DIXON on 6th February 2014.

This time, I did get a prompt response. Headed ‘Confidential’, it nevertheless had other recipients in the Cc: box (and, for all I know, further recipients in the Bc: box). So much for Lisa DIXON’s conception of confidentiality – a subject that I will be addressing in great detail in the near future. And please note that I had not made a complaint; I had simply drawn her attention to very serious allegations against her Leader, in the public domain.

Her emailed response contained only one line:

Before reproducing the allegations (made by a member of the public – not me, remember), readers should be aware that, in over a year, Councillor Tom FOX has never denied or rebutted any part of this witness’s statement. Here it is in full:

I was arrested but never was charged. I was taken to Scarborough police station and locked up in the custody suite for eight hours. The police would not even let me give my giro including milk tokens to my then girl friend as the child needed milk. My girl friend was eventually brought to the cell area to get the giro and milk tokens then PC Clarke and I believe PC Thomson both grabbed me in a neck hold in front of my girl friend, forcing a large custody cell key into my mouth, ripping the inside of my mouth. My girl friend ran out and went straight to my solicitors to see Steven Dury at Thorpe and Co, Scarborough Valley Bridge Parade. I was forced back into the cell by both officers and the door locked. My mouth was bleeding badly I knew that I needed hospital treatment I kept buzzing the buzzer then the desk Sergeant came, opened the cell door and asked me what I wanted I found it very painful to speak and felt very threatened, wandering what could happen next if I had to stay here, my life could be in danger. What if the key had gone in my eye or choked me? Soon as the desk sergeant saw my face with the blood coming out of my mouth he said he was going to get another officer to take me immediately to the hospital at Scarborough. The police officer that took me was called was Scarborough Old Town local Bobby Kev Buchanan. At the hospital I had to have my mouth stitched up which caused me great discomfort and numb feelings for a very long time. Eating was very difficult. I lost weight. I was taken back to the police station and locked up. Around 30 minutes later I told the desk sergeant that i wanted to file a complaint against the two officers regarding assaulting me. 15 to 20 minutes later Inspector Tom Fox came into my cell to say to me if I was to file a complaint against the two officers that he would do everything in his power to say that I assaulted the two officers and he would make it stick, “I do it all the time and believe me you will lose”. This happened in 1987. I had had a serious accident in 1985. My right arm was nearly ripped off giving me a disability for life which I still have to attend hospitals. I was later released with no charges.”

This first-hand testimony (which has since been repeated to me and enlarged upon in great detail by its author, in the presence of an award-winning Channel 4 investigative-journalist) stands as an appalling indictment of policing in Scarborough in the 1980s – an indictment of our Council Leader, Tom FOX.

For over a year, now, it remains in the public domain, unrebutted by the North Yorkshire Police or Councillor Tom FOX. Its veracity has never been denied by Councillor Tom FOX, who has now allowed it to become time-barred and therefore no longer susceptible to legal challenge.

To deny it now would be feeble and unconvincing – quite literally incredible.

In my view, Tom FOX has not denied because it is true. 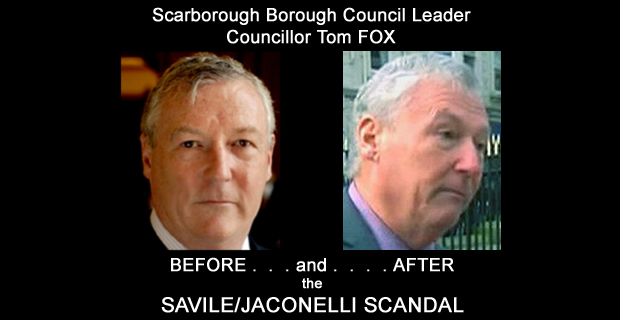 And it is entirely consonant with other statements made by other victims. It certainly inclines me to the belief that victims of SAVILE and JACONELLI who, in the company of their own parents, reported their complaints of sexual abuse to the Police in Scarborough at that time have told the truth when they have asserted that every conceivable ‘influence’ was used by the Police to dissuade them from pursuing their complaints further.

The North Yorkshire Police admits to only 35 victims of SAVILE and JACONELLI throughout the 40 year investigation period,  between 1958 and 1998 – on average, less than one offence each every two years.

That is a gross insult to the hundreds (thousands?) of youngsters exploited by the most prolific predatory paedophiles in British history. And it is an insult to the intelligence of every tax-payer in the Borough who pays for a Police Service.

Forty years, thirty-five victims, and not one single Police Officer identified as having failed in his/her duty or betrayed the public trust? 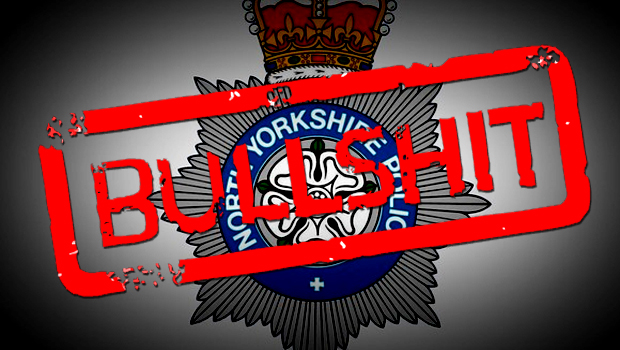 Small wonder that Assistant Chief Constable Paul KENNEDY of the North Yorkshire Police comes over on the television reports as a shifty apologist for an innately unprofessional and ultimately unaccountable autocracy.

Assistant Chief Constable Paul KENNEDY, in his Press Statement, then proceeds to dismiss the entire issue of the countless victims who have been let down by his Force, with this single short sentence:

Note that caveat: “The AVAILABLE information” – a very oblique reference to the “missing” documents, perhaps?

So there it is, in stark and simple terms – the North Yorkshire Police “missed opportunities”. It would be bad enough if the fact that NYP had merely “missed” some opportinities – it would be tantamount to an admission of being UNFIT FOR PURPOSE.

Was the PC CLARKE (identified by malcolm in his statement) a party to any of those “buried” SAVILE/JACONELLI opportunities?

I conclude now with a very serious question for “the powers that be” to ponder, over the weekend and beyond:

The whole nine yards is yet to come.

“Sorry” is not enough.

“Sorry” is not ACCOUNTABILITY.

And ACCOUNTABILITY is the ONLY remedy when it comes to breach of the public trust.

I look to our elected Councillors to demand action. 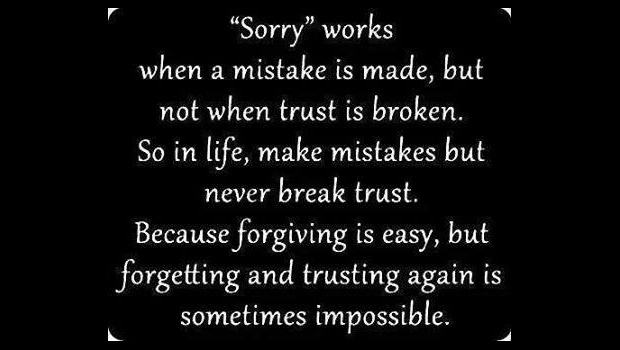