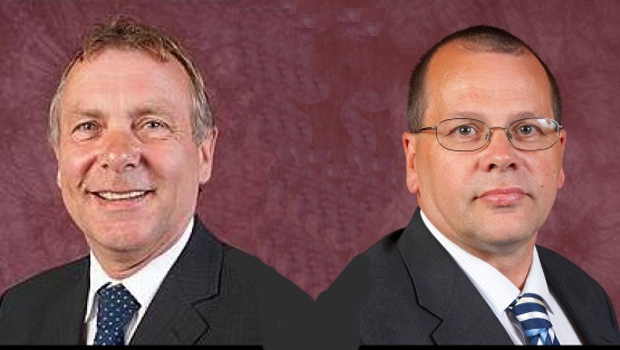 In September 2016, I reported in depth, and with the full and close co-operation of SBC Councillor Michelle DONOHUE-MONCRIEFF [Con. > Ind. > Con.], on the aftermath to Michelle having suffered some sort of a breakdown in a Hunmanby public house.

My report included a formal statement from Councillor DONOHUE-MONCRIEFF describing her immediate recollection of events.

I reproduce it here, for convenience of reference – the section which concerns us begins at para.51:

The Enquirer is one of scores of recipients of a copy of an email from a female member of the Filey public to the Thirsk & Malton constituency MP, Kevin HOLLINRAKE [Con.], calling upon him to request the Scarborough & Whitby Conservative Association and Scarborough Borough Council to take disciplinary action against his fellow Tories, SBC Leader Councillor Derek BASTIMAN [Con.] and Councillor Joe PLANT [Con.], in respect of previously reported allegations of “sexist bullying”, referencing the events described in paras.51-67 of Councillor DONOHUE-MONCRIEFF’s statement (see above).

In substance, these are the same allegations made to me on a number of occasion, in person, with witnesses, by Councillor DONOHUE-MONCRIEFF, in the weeks and months following the Hunmanby incident. The complainant has further alleged that the purported “sexist bullying” amounted to an act of revenge against Councillor DONOHUE-MONCRIEFF, for her transparency in bringing the matter to the attention of the public, via the Enquirer.

The complainant also alleges that it is common knowledge that Mr HOLLINRAKE was approached at the time – but took no action.

Yesterday, 19th December 2017, one of the recipients – County & Borough Councillor Joe PLANT [Con.] (well-known to Enquirer readers from its coverage of the NYCC Extended Schools “Me Too!” voucher abuse scandal, and the infamous “double-dipping” of IT/Broadband Allowances) – responded to the allegations, thus: 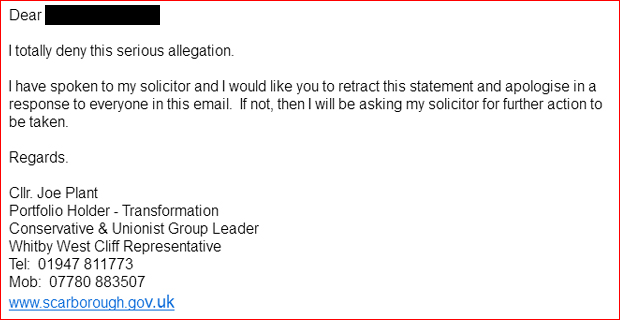 The irony is that Councillor Joe PLANT has responded to an allegation of “sexist bullying” by threatening a woman.

Councillor BASTIMAN, who has apparently (though not transparently) kept his own counsel, must be spitting feathers.

He will remember, of course, that neither he nor Councillor PLANT offered any refutation of Councillor Michelle DONOHUE-MONCRIEFF’s version of events in the immediate aftermath of the publication of her formal statement, back in September 2016 – or ever (to my knowledge) since. Perhaps he felt, at that time, that enough had been done to lay the matter to rest . . .

The Filey resident (whose identity it is not presently necessary to disclose, either by name or profession) who has raised the present complaint appears unperturbed by Councillor PLANT’s threat of legal action and has responded with great conviction, asserting that Councillor PLANT has committed a libel and naming witnesses who are alleged to have approached Kevin HOLLINRAKE MP over a year ago on the subject of the aforementioned “sexist bullying” allegations, to no avail.

At the time of writing, I have seen no response from Mr HOLLINRAKE.

This would suggest that the complainant has been doing some homework on Councillor Joe PLANT [Con.] – or “The Egg-Plant” as he is jocularly known in Whitby (ref. John LENNON: “I Am The Walrus”).

Councillor Joe PLANT – who is known to ‘protesteth too much’ under pressure – has, in the past, threatened me (too) with legal action; more than once. Bluster.  I called his bluff. Nothing happened.

In my view, bluster is the last refuge of the inferiority-complex driven bully – that particularly detestable personality-type so often encountered amongst those promoted far beyond their innate competency.

On this occasion, we have a member of the public with the courage to face down bully-boy tactics and come back with a very public fusillade of provocative Tweets.

When one examines the available pool of prospective Council candidates, the future looks bleak for the SBC Conservative Group; nodding dogs have no value in the absence of credible leadership. As we have seen, the only incumbents to raise their heads above the parapet may as well have held up a card reading “Look at me! I’m stupid!”. The Directorate must be delighted.

It is salutary to remember that, on 10th May 2017, North Yorkshire Police announced that, henceforth, misogyny would be prosecuted as a hate crime.

With what appears to be such a classic Tory cover-up in mid-stride, readers may be assured that the Enquirer will be following these events very closely.