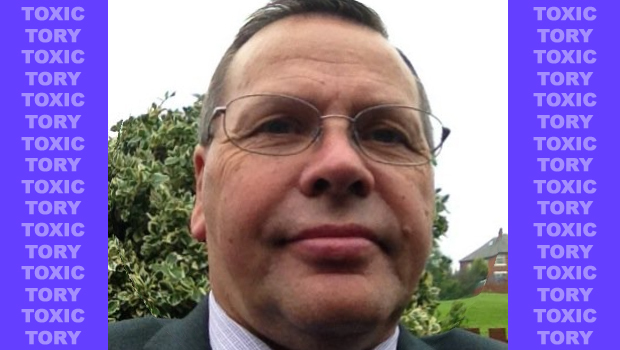 In brief, a lady who has made grave allegations of “sexist bullying” against SBC Leader Councillor Derek BASTIMAN [Con.] and Portfolio Holder for Transformation Councillor Joe PLANT [Con.] was promptly threatened with legal action by Councillor PLANT.

The Portfolio Holder for Transformation has since (as predicted) transformed himself and reversed his position, following a carpeting by his ‘masters’. Remembering that Councillor PLANT is the Chair of the Conservative Group at SBC, we are left to speculate as to just who his ‘masters’ might be – Derek BASTIMAN? Jim DILLON? Bob GOODWILL? The Brains Trust!

Your email is noted.

If you or anyone have evidence, then please go to the relevant authorities through their complaints procedure.

I will be only too glad to help with their enquiries.

I hope you have a lovely Christmas too.

It having been determined that a U-turn was imperative (even the Tories nabobs having recognised that a Portfolio Holder accused of “sexist bullying” was digging the hole even deeper by firing off threats to the woman who complained), it would perhaps have been wiser if someone had drafted Councillor PLANT’s email for him. This would possibly have eliminated the abysmal grammatical errors and filtered out the shabby little stabs of sarcasm.

Hebephile-apologist Councillor John NOCK [Con.] has also been firing off emails, the tone of which could equally easily have been predicted, fairly summarised in the arrogance of the following two sentences:

“You have made allegations which you have not substantiated and expect me to act as judge and jury. Your second paragraph is crass and thoughtless.”

Dumb and dumber.
As for Councillor BASTIMAN, who was only able to survive the Vote of No Confidence by swinging the Whip – which itself only sufficed by dint of the intervention of Mrs Lisa DIXON and her undocumented (i.e. legally non-existent) external ‘legal advice’ allegedly supporting the ‘Special Dispensations’ which allowed BASTIMAN, his wife and his Cabinet to vote on an issue in which their own personal, prejudicial and pecuniary interests were irrefutably manifest, has (wisely, for him) remained silent – taking his cue from CEO Jim DILLON, who keeps his own name well away from almost everything except his electoral duties.

The ether has been buzzing with Tory headless chicanery since the publication of “SBC: ‘Sexist Bullying’ Allegations Resurface”, so it is of no surprise that Kevin HOLLINRAKE has distanced himself from PLANT and BASTIMAN, via his PA, Charlotte MILLIGAN, who has advised the complainant to proceed through the SBC Complaints Procedure and/or the Scarborough & Whitby Conservative Association:

Mr Hollinrake has sked[sic] me to advise you that you should make a complaint to the council www.scarborough.gov.uk/home/council/complaints-comments-and-compliments and/or with the Chair of Scarborough Conservative Association.

Having attempted both avenues in the past, and thus being able to document what a world of fantasy that involves, I can confirm that, in my view, Mr HOLLINRAKE’s advice amounts to nothing more than “Please take this toxic mess away from my squeaky clean door. I wish you ‘Bon Voyage, Titanic’. Find your own lifeboat, lady. I’m outa here!”.

Of course, others may interpret it as compassionate and caring.

On Saturday 23rd December 2017, Mr HOLLINRAKE took to the Twittersphere to make good his escape – but only after Councillor Dilys CLUER had made clear that the complaint was by no means without foundation..

I salute Councillor Dilys CLUER [Green], who is the only protagonist in this thoroughly sickening display of disregard – indeed, contempt – for the wellbeing of the vulnerable Councillor at the centre of this whistle-blowing attempt, to have acknowledged that “something went very wrong” (finally, someone admits it!) and that extracting the truth is the proper route to preventing future bullying at SBC, “sexist bullying” or otherwise. Significantly, Councillor CLUER has addressed that view directly to @ScarboroCouncil. Who will respond to her call?

I hereby promise Councillor CLUER that I stand ready, having a great deal of information (documents and audio recordings) at my disposal, to give material evidence to any forthcoming enquiry. I offered the same support to the MAZARS investigation into the Ben MARRIOT allegations of fraud and corruption at SBC, but MAZARS avoided me like the plague – as they would, following HHJ Humprey FORREST’s description of the previous SBC internal investigation as “a complete whitewash”.

How do you like that? “Investigators who do not like to enquire too far for fear of disrupting colleagues”.

And what about Jim DILLON, who “simply ignored” emails? Business as usual.

These hapless buffoons could not do a better job of making themselves look crooked if they put their full attention to it.

Readers who are wondering how it is that I am privy to all these “sexist bullying” allegation emails must also be wondering what purpose the Council’s utterly discredited email interception policy is achieving. Not much. Aside from its illegality and indefensible immorality, it is patently unenforceable.

For the record, the following Tweeter is completely unknown to me. 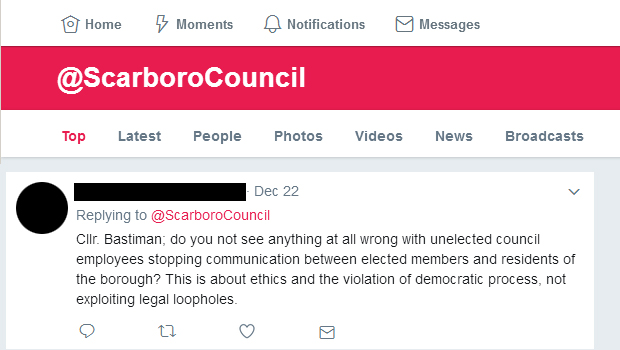 They cannot silence us all. In truth, the only silence they can enforce is that of their own cowed and cowardly fellow Conservatives – and not even all of them.

Many readers may have forgotten how former Councillor Geoff EVANS was bullied after he corroborated Trevor HARRINGTON‘s allegations against Tory predatory paedophile former Mayor, Councillor and Alderman Peter JACONELLI [Con.]. And he is not the only former Councillor who has asserted to me, in writing, that he was bullied over that same issue.

Councillor CLUER can be assured that she is not alone in abhorring such conduct. Others take the same view – and you will find their names and opinions published more and more frequently in the pages of the North Yorks Enquirer.

Others will be joining them. People of good conscience are talking about “the Scarborough Spring”. I wish them a Happy New Year.

2017 has been a year of disrepute for the Leader, but the end is in sight. Even ditching PLANT will not clear the slate. 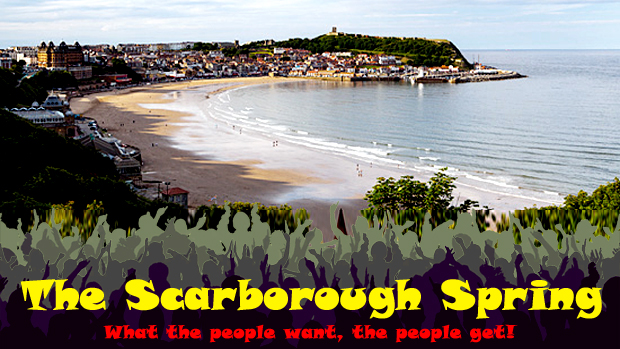