North Yorkshire Enquirer readers in the Scarborough area have been quick to point out a couple of potentially significant sentences in yesterday’s (2nd June 2015) issue of The Scarborough Comet, under the title “Opening up the Town hall – Part 2”, by Mark VESEY, both on-line and in the hard-copy edition.

Mark VESEY is, in fact, Councillor Mark VESEY, one of only two Green Party members of Scarborough Borough Council. He represents electors in the Ramshill ward.

In the first installment of his Scarborough Comet series “Opening up the Town Hall – my experience as a new councillor”, Councillor Mark VESEY [Greens] highlighted a number of important issues, many of them (as one might anticipate) of environmental significance.

But the passage of special interest to Enquirer readers reads as follows:

“In my first full Council meeting, our task was to elect a leader, as Tom Fox will be made mayor soon. Councillor Derek Bastiman (Cons) and Councillor Steve Siddons (Lab) gave a short speech about why they should be in charge. (This can be seen on the Council website as many meetings are video recorded and available to watch live or later on).

Councillors are allowed to ask questions of the two candidates and mine, naturally, had to be about the future of Scarborough as Britain’s first seaside town, and secondly, about the openness and transparency of the Council.

It appears that my question did not go down very well with Cllr Bastiman and he refuted the slur that the Council has any crooks in it.”

It would be interesting to learn which definition of the word “crook” Councillor Derek BASTIMAN had in mind . . .

It may be naïve of SBC Leader Councillor Derek BASTIMAN to make such a bold assertion; it may be disingenuous. It may be a bare-faced lie in the style of the master. I believe that it is, and I will return to this point, presently.

But let us first return (as did Mark VESEY himself, in the second installment of his series) to that second question, about the “openness and transparency in the Council” – the question that “did not go down well with Cllr Bastiman”, who may perhaps have some concerns about the good-standing of some of his “yes-man” Cabinet Portfolio-holders. 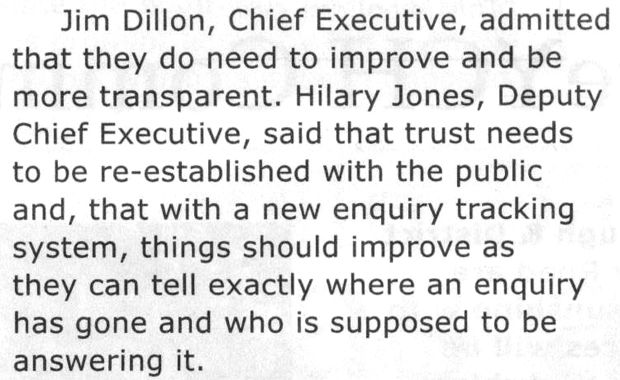 Chief Executive Officer Jim DILLON is widely referred to, by Councillors and members of the public, as “Silent Jim” – and for good reason.

So this admission that Scarborough Borough Council does “need to improve and be more transparent” is both surprising and welcome – and more than somewhat ironic, given Silent Jim’s record over the past decade.

Readers may remember, for example, the 13th February 2013 letter to Jim DILLON from a resident of Perth, Western Australia – Trevor HARRINGTON – who, along with former Councillor Geoff EVANS, was first to go public with accusations of paedophilia against former Scarborough Mayor and Alderman Peter JACONELLI, who has subsequently been shown to have offended alone and in joint enterprise with Britain’s most notorious pervert, Jimmy SAVILE.

The Council Procedure Rules are clear on the rôle of the Chief Executive Officer. The Chief Executive must report to full Council on any questions received or announcements resulting from other communications.

But Jim DILLON did not do bring Trevor HARRINGTON’s allegations to Council. He was silent in regard to Trevor HARRINGTON’s letter of 13th February 2015, keeping the vast majority of Councillors in the dark – and they would have stayed in the dark, too, were it not for Real Whitby (and subsequently the North Yorks Enquirer).

So Hilary JONES is right; the Council does “need to improve and be more transparent” – starting at the top with her boss, Jim DILLON.

It is high time to see some leadership by example, at least on the Paid Service side of the Council. It would be foolish to expect as much from Leader Councillor Derek BASTIMAN, a petty man who has repeatedly shown a shifty and evasive side to his character – and and a flagrant disregard for the truth.

And Deputy Chief Exec Hilary JONES’ remark that “trust needs to be re-established with the public” is a tacit acknowledgement of the deep suspicion with which informed observers view the Council.

Summing up; if these two declarations of intent from the two top Officers of SBC contain any element of truth, then they mark a major sea-change in the relationship between the Council and the people it exists to serve.

The solution to Jim DILLON’s and Hilary JONES’ problem is simple. The Council MUST:

The public trust is not an entitlement of those in public office; like respect, it has to be earned. I hope that SBC will start earning our trust from the moment they read this article. I hope . . .

So “Bravo!”, Councillor Mark VESEY (though you may need to raise your game to have any real impact on the prevailing culture at “The House of Secrets”).