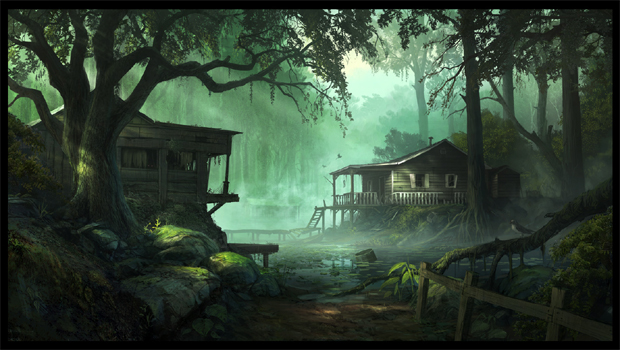 Much has been said and written about the vote on Monday 9th January 2017 in which it is widely understood that the Council voted by 22:21 in favour of demolishing The Futurist Theatre. In fact, that outcome is not as clear as it would at first seem.

The following excerpt from an email from SBC Solicitor David KITSON outlines his (i.e.the Council’s) view of events:

To be clear, according to the official record – the Agenda and Minutes of that meeting, including Agenda item 7(ii)Budget/Council Tax 2016/17 (Report reference 16/57) – the £4M was allocated to “the redevelopment of the Futurist site” and the word “demolition” was never mentioned.

Not all Councillors understood the word “redevelopment” necessarily entailed “demolition”.

In fact, some Councillors understood that in the case of a The Futurist Theatre (which had been closed, unmaintained and to all intents and purposes left derelict for the past three years), the word “redevelopment” by no means excluded the possibility of refurbishment, or restructuring, followed by a re-opening under new management, most likely under the auspices of a Charitable Trust set up by the Save the Futurist group.

And yet Leader Councillor Derek BASTIMAN is on the record as stating:

It is certainly not the case that all fifty Councillors were aware that they had collectively approved “demolition”. Of course, Councillor Janet JEFFERSON [Ind.], has made the point before, and repeatedly, notably here: 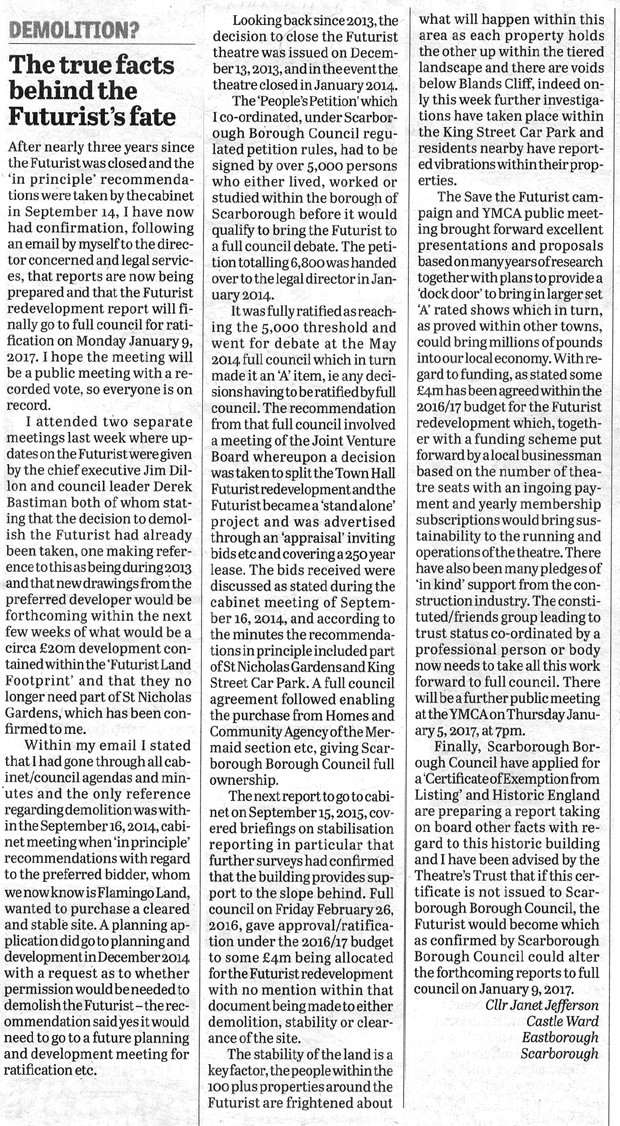 In my view, Councillor Janet JEFFERSON’s remarks are valid, but have been roundly ignored by a Council determined to achieve its desired result, if necessary even by way of a departure from strict adherence to procedure.

At the meeting on 9th January 2017, then, Councillors were being asked to approve the allocation of £4M to finance a “demolition” which had never been explicitly approved.

Contrary to the assertion in the above email, it is, in fact, absolutely correct (though rather informal) to state that Councillor Michelle DONOHUE-MONCRIEFF was, in the natural and ordinary meaning of the word, “sacked” from the Cabinet. I have spoken with her at some length on the subject, just yesterday, and she assures me that she was summarily removed from the Cabinet by Councillor Derek BASTIMAN (which, granted, is within his remit as Leader).

She is emphatic in her assertion that she did not resign from the Cabinet. I refer readers to her contemporaneous statement of events, here.

I therefore challenge Mr David KITSON to produce a copy of a letter of resignation signed by Councillor Michelle DONOHUE-MONCRIEFF (which I am assured does not exist) by noon on Monday 23rd January 2017, OR a formal retraction of, together with an unequivocal apology for, his misleading statement. Do the right thing, please, David.

Incidentally, Councillor Michelle DONOHUE-MONCRIEFF [Ind.Con], as David KITSON stated, was “replaced” by Councillor Sandra TURNER [Con.], who does not seem unduly happy in her new rôle – if her Facebook comment this morning can be taken at face value:

Councillor Luke BACKHOUSE [Con.] has been widely castigated for his decision to ABSTAIN from voting, largely because he had previously indicated his passionate support for retaining The Futurist Theatre, in the public domain on 3rd November 2016, following the  previous evening’s public meeting. 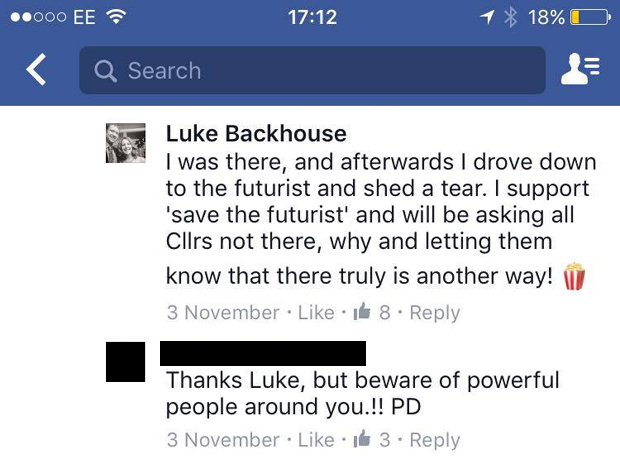 Setting aside the labyrinthine intricacies of SBC Solicitor David KITSON’s email to all Councillors  (well worthy of careful inspection), sent after close-of-play on the Wednesday, two working days before ‘D-Day’, a number of Councillors have suggested that even this ludicrously high threshold for predetermination must surely have been surpassed in the case of Councillor Luke BACKHOUSE [Con.].

In my view, the point is now academic. Councillor Luke BACKHOUSE’s decision to ABSTAIN from voting may have signified nothing more mysterious than that he felt it impossible to know whether he held a predetermination (in David KITSON’s highly abstruse definition of the word) or not – so loose is the information provided by Mr David KITSON.

In any case, even had he voted AGAINST (as would appear to have been his genuine and sincere conviction), that would merely have tied the vote at 22:22 – and the Mayor Councillor Simon GREEN [Con.], would surely have voted for demolition. Had Councillor Luke BACKHOUSE voted FOR demolition, it would have been 23:21 in favour – clear victory – and Councillor Vanda INMAN [Lab.] would have been marginally ‘off the hook’

Councillor Vanda INMAN [Lab.], voted FOR demolition and has come in for some rabid criticism – and not only from her own colleagues in the Labour Group. Some Councillors freely admit to having had difficulty following the thrust of her meandering speech – or the ramifications. There may yet be repercussions.


[I have purposely underlined the word “sacking”; I refer readers to Mr David KITSON’s terminology, earlier in this report. Who could doubt that the verb “to sack” here means unilaterally removing Councillor Vanda INMAN from her position in the Labour Group, just as Leader Councillor Derek BASTIMAN used his authority to remover Councillor Michelle DONOHUE-MONCIEFF from her position in the Cabinet? He “sacked” her. Punkt aus.]

In my view, this is a matter for the Labour Group to resolve, in accordance with the party’s own rules, just as it was a matter for the Conservative Group led by Councillor Joe PLANT [Con.] to remove the Whip from Councillor DONOHUE-MONCRIEFF – which is exactly what happened. What is not clear is why the current climate at the House of Puzzles requires David KITSON to mislead the public as to the true turn of events. And why he is prepared to compromise himself by going along with it.

Of course, had Councillor Vanda INMAN chosen to ABSTAIN from voting, the vote would have tied at 21:21 – and once again the Mayor, Councillor Simon GREEN [Con.] would, no doubt, have exercised his casting vote – FOR demolition. Which takes us back to 22:21 FOR demolition.

Only if she had complied with the Labour Whip and voted AGAINST demolition would the outcome have been reversed to 22:21 against, thus ‘saving’ The Futurist Theatre, with no opportunity for the Mayor to invoke his casting vote. game over.

The spectre of predetermination has been doing the rounds for some time regarding comments on Councillor INMAN’s blog Qalypso as well as an entry in her Register of Interests – a Disclosable Pecuniary Interest (DPI) in her leased business premises, ‘Vandals’, at 29 Foreshore Road, not a million miles along the front from The Futurist Theatre. (For the curious, another entry is worth a passing mention: “Redacted – sensitive interest”).

The theory goes that a daytime fairground clientele might be expected to provide ‘Vandals’ with a passing trade eminently more receptive to the prospect of purchasing her ‘day-at-the-seaside’ product lines than an evening theatre-going crowd, who one might reasonably consider unlikely to be in the market for beach accoutrements. It is a fair point.

Thus, the theory continues, it may plausibly be argued that Councillor INMAN did have a real predetermination – in fact, a DPI – that was fuelled by her desire for the success of the Flamingoland bid, which might reasonably be expected to benefit her (and that this DPI would require declaration at the start of the meeting, thus preventing her from voting in the Futurist decision). I emphasise that I do not have David KITSON’s infinite knowledge so I cannot comment on the plausibility of these speculations.

There has been speculation, too, about the absence (with apologies) from former Leader, Councillor Tom FOX [Con.]. Many were surprised that one of the principle “directing minds” behind the drive to demolish the theatre since it was first mooted in 2010 chose to stay away – either unwell, fearful of facing ‘the angry mob’, or quietly confident of a successful outcome without his vote. There may be other explanations . . .

Some claim to have successfully predicted Councillor Tom FOX’s absence, the theory being that he too may have a DPI – one that he was unwilling to air in public. Others claim to know for a fact that Councillor Tom FOX does have a DPI and that they know what that DPI is – but they were not so bold as to venture an opinion in writing, and finally sauntered off whistling “Staying Alive” . . . or was it “Pretty Flamingo”?

For such a tight vote (and on such a contentious issue) the result was greeted by a rather muted response akin to suffering the demise of a hope that was always, at best, forlorn. The feeling is that when this Council wants something, no appeal to rationality will deter it.

Councillor Neil PRICE [Lab.] did not attend the meeting either; neither did Councillor Tony RANDERSON [Lab.], who was out of the country at the time of the meeting. Few observers will have missed the significance of those two absences; had the Councillors in question both attended the meeting (and, presumably, followed the party line), then the result would have been 23:22 AGAINST demolotion and the Save the Futurist group would have been euphorically cheering them to the rafters. Alas, it was not to be.

So, in my view, the vote looks certain to stand – though that may not be the absolute bitter end for the theatre. We continue to await the Listed Building decision with bated breath; heartened, perhaps by the success of the Con Club appeal. At least one drive toward heritage destruction has been thwarted.

One other contentious issue was to arise at the meeting of 9th January 2017, and once again, Director of Legal & Democratic Services and Monitoring Officer Mrs Lisa DIXON was in the spotlight. In response to questions arising, Mrs Lisa DIXON assured Councillors (and press and public) that she and her solicitor colleagues in Legal Services had been unable to locate any restrictive covenants attached to The Futurist Theatre; nor had the Homes & Communities Agency (HCA).

For anyone who found anything equivocal in her remarks, Mrs DIXON re-iterated her assurances at the Cabinet meeting eight days later on Tuesday 17th January 2016, that she and her award-winning colleagues had been unable to unearth any restrictive covenants, going on to assert that the Council anyway possessed sufficient “powers of appropriation”, by means of which any restrictive covenants could be effortlessly circumvented; a mere formality.

What Mrs DIXON is saying here is that any reliance placed upon a twelfth-hour posse of covenants riding to the rescue of Save the Futurist will simply be wishful thinking.

She may be right. But I should like to know how it could be that an ordinary member of the public with no previous experience of deeds and covenants or Land Registry could achieve what Mrs DIXON’s phalanx of solicitors was unable to achieve. A prudent member of the public decided to visit the Land Registry web-site shortly after that Cabinet meeting and enter an on-line search request – with the following result . . . easy as that:

I would not go so far as some, but I have to say that the above email appears to invite one or other of two deeply damning conclusions – dishonesty or incompetence. Take your pick.

I am keeping my opinion to myself.

Meanwhile, the Scarborough resident’s PETITION calling for a VOTE of NO CONFIDENCE in Cllr Derek BASTIMAN and his Scarborough Borough Council TORY CABINET is now at the point where there may be insufficient seats in The Futurist Theatre to accommodate all of the people who have signed. 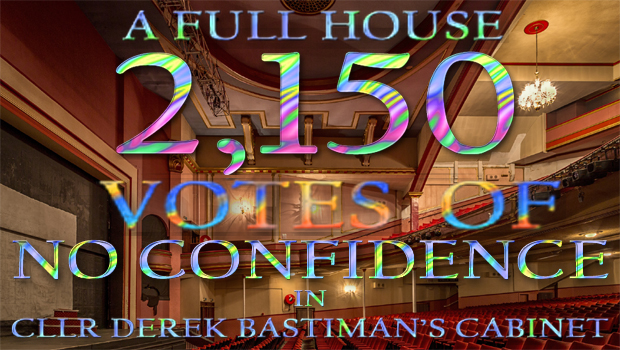 You can continue to help by SHARING the link to GoPetition, here: http://tinyurl.com/j3r6u3f

The writing is on the wall for Councillor BASTIMAN – and it demands: