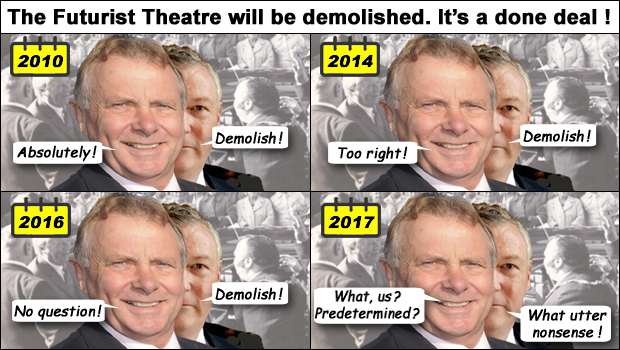 In anticipation of a close vote at Scarborough Borough Council’s meeting of Full Council on Monday 9th January 2017, Scarborough Borough Council’s Mr David P. KITSON (Solicitor), Deputy Monitoring Officer and Regulatory & Governance Manager (formerly entitled Senior Solicitor, or ‘SS’) – well known to regular Enquirer readers for his astonishing redaction of the Council’s external legal advice from East Riding of Yorkshire Council on planning for the abortive 2012 attempt to abandon the Town Hall and move the Council lock-stock-and-barrel out into the sticks – has sent an email to all fifty Councillors reminding them of the legal position in relation to conflicts of interest and predetermination.

Of particluar interest are the following excerpts from David KITSON’s email (the full text of which is reproduced, below):

“It must be remembered however that where a Cllr has already made up their mind without taking into account all relevant material considerations, including arguments made in the debate at Committee, then they are predetermined because their view will not change (it has crystallised regardless).”

“HOWEVER – it is not the case that predetermination will never exist – where a Cllr has a closed mind, or where the evidence supports a finding of apparent bias and predetermination despite a Cllr claiming to have an open mind, a decision can be successfully challenged.

Councillors must ask themselves whether they have already determined a matter (their decision has crystallised and will not change), or whether they are instead predisposed to a certain outcome, but will not crystallise their decision until having taken into account all material considerations, and having listened to and considered all arguments and debate.”

In view of the emphatic nature of remarks made either in Council or in the press, on social media or in the wider public domain, it is possible that some Councillors may have rendered themselves ineligible to vote in Monday’s decision regarding the proposed demolition of The Futurist Theatre.

Whilst it is impossible to predict with any certainty which Councillors will (a) attend the meeting, (b) vote in favour of demolition, (c) vote against demolition, or (d) abstain from voting, we do know that Councillor Tony RANDERSON [Lab.] is unable to attend, due to a long-standing alternative commitment. Councillor Michelle DONOHUE-MONCRIEFF [Ind. Con.] is also unlikely to attend, and it has been mooted that Council Mark VESEY [Green] may be a reluctant absentee. There may be others.

There are presently 25 Conservative Councillors, 14 Labour, 5 Ukip, 2 Green and 4 Independents – Councillors Bill CHATT [Ind.] and Councillor Mike COCKERILL [Ind.] , plus Councillor Janet JEFFERSON [Ind.] , who has been instrumental in presenting the case for saving The Futurist Theatre on more than one occasion, and Councillor Michelle DONOHUE-MONCRIEFF [Ind.Con.].

Also to be taken into account is the fact that there is a small group (indeterminate in number) of Conservative Councillors who have yet to be satisfied that the proposed demolition of The Futurist Theatre has been adequately researched. They may yet cause an upset.

Furthermore, with North Yorkshire County Council elections only four months away, and voters’ potential displeasure still fresh in their minds, prospective County candidates may fight shy of defying those whose votes may prove critical to their continued presence at County Hall.

All in all, many pundits are suggesting that the vote is too tight to call.

And some Councillors (as has been reported previously in the Enquirer) have even publicly expressed the rather rash view that the demolition of The Futurist Theatre is already a “done deal”.

Also, it is difficult to see how those Councillors who number amongst the ‘directing minds’ behind this proposal, unwaveringly pursued for a number of years now, can conceivably claim not to have a predetermination – that would be tantamount to having marched from John o’ Groats to Landsend, only to pause at the outskirts of the town to announce that Lansend was not necessarily the intended destination in the first. To say that a Councillor may vigorously pursue the same plan for years without a predetermination as to the outcome is to treat words with contempt – and the drafters of the Localism 2011 Act, likewise.

In the very likely event that certain Councillors will be challenged, perhaps successfully, on predetermination grounds, electors can expect a fraught meeting on Monday, and this is likely to test the Mayor (and Chairman) Councillor Simon GREEN [Con.], whose performances in the Chair since his inauguration in May 2016 have thus far been at best indecisive. He has never faced a hostile gallery.

Any decisions made as to the existence of predetermination (with its concomitant disqualification from voting) may later be subject to Judicial Review.

All things considered, members of the public attending the meeting should expect an e-x-c-e-p-t-i-o-n-a-l-l-y  l-o-n-g session.

In the event that Leader Councillor Derek BASTIMAN [Con.] should lose his flagship vote – and with support for the Scarborough residents petition calling for a VOTE of NO CONFIDENCE in the present Cabinet still growing – there has been much speculation as to where that will leave the credibility of his Leadership.

Interested readers are invited to study David KITSON’s “Refresher on Conflicts of Interest and Predetermination” email with great care.

As the New Year gets underway, I felt it would be useful to remind all Members about conflicts of interest, predetermination and bias.

Failure to act in accordance with the law can result in decisions being subject to legal challenge, as well as potential criminal offences and civil court claims. It is therefore important to get things right to protect not just the Council, but yourselves as individuals making decisions in the public interest.

This email is meant as a brief overview. Should you require legal advice then please contact myself or Lisa Dixon.

There are 2 types of interest relevant to Members:

Where an item of business being considered for determination by the Council, any Committee you are part of, or by you as an individual Member relates to or affects any of your DPIs, then you cannot take part in the discussion of that item or vote upon the same unless you have been granted a dispensation. You must also withdraw from the Meeting at which the item is being considered for the duration of that item.

Failure to comply with this is a criminal offence under the Localism Act 2011, as well as being a breach of the Code of Conduct.

For example, should you own or have any other beneficial interest in land or properties within the Borough (you may have a tenancy or lease etc.) you will have registered this as a DPI. If a matter for determination before Council concerns the sale or lease of property or land bordering the property or land in which you have an interest, then the matter is highly likely to relate to or affect that property or land.

The rules on predetermination were developed by the Courts to ensure that Cllrs participate in meetings with an open mind. The Government sought to clarify the rules about predetermination by enacting section 25 of the Localism Act 2011. This was due to a concern that the rules were being interpreted in an overly strict way, reducing the quality of debate and stifling local discussion.

In a nutshell, Cllrs must not have a closed mind on an issue (predetermination), however a Cllr can have a ‘predisposition’ in favour of a certain outcome.

Cllrs are not expected to make decisions with empty minds. The law recognises that Cllrs will have political opinions on matters of local controversy. The test for apparent predetermination is in fact very difficult to satisfy, and the following case law provides useful examples. It must be remembered however that where a Cllr has already made up their mind without taking into account all relevant material considerations, including arguments made in the debate at Committee, then they are predetermined because their view will not change (it has crystallised regardless).

The case of Island Farm Development v Bridgend CBC (www.bailii.org/ew/cases/EWHC/Admin/2006/2189.html) concerned a refusal by the Council to sell land to Island Farm Development who wanted to develop the land. There was strong local opposition to the proposed development, and the sale of the land had been a manifesto issue for some of the Councillors elected. Other Cllrs had campaigned on the other side. The Judge was clear that Members are entitled, when making decisions on local issues, to take into account policies they believe in, especially if they have been part of a manifesto.

In Lewis v Redcar and Cleveland BC (www.bailii.org/ew/cases/EWCA/Civ/2008/746.html) a decision to grant permission was made during the period of purdah (pre-election period). All of the Members of the Committee who were part of the controlling coalition voted in favour. The decision was challenged on the basis that there had been apparent bias or predetermination on the part of the coalition Members. The Judge at first instance allowed the challenge and quashed the grant of planning permission. The developer appealed to the Court of Appeal who set the decision aside, reinstating the planning permission. In doing so, the Court stated that Members are elected to propose and to pursue policies, and were entitled to be predisposed to determine an application in accordance with their political views and policies, provided that they listened to the arguments and had regard to material considerations. The Court could infer a closed mind or the real risk that a mind was closed from the circumstances and the evidence. On the facts the evidence did not show that any of those who voted in favour had closed minds.

In connection with the matters at issue in Lewis, the Court of Appeal concluded that the following matters did not provide evidence of predetermination:

In doing so the Court of Appeal made it clear that the test for apparent predetermination is difficult to satisfy.

HOWEVER – it is not the case that predetermination will never exist – where a Cllr has a closed mind, or where the evidence supports a finding of apparent bias and predetermination despite a Cllr claiming to have an open mind, a decision can be successfully challenged.

Councillors must ask themselves whether they have already determined a matter (their decision has crystallised and will not change), or whether they are instead predisposed to a certain outcome, but will not crystallise their decision until having taken into account all material considerations, and having listened to and considered all arguments and debate.

Scarborough Borough Councillors may be contacted by email at the following addresses: