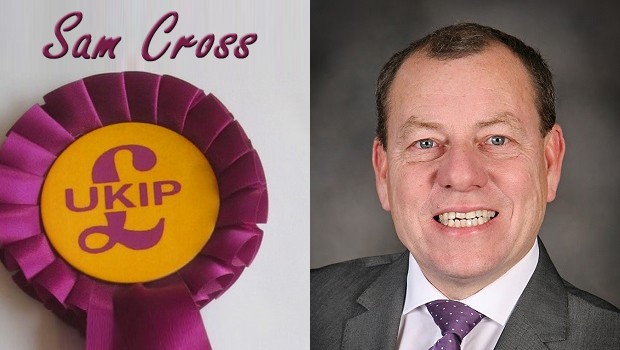 A Letter to the Editor from Sam CROSS (from whom we have heard before) – the United Kingdom Independence Party (UKIP) Prospective Parliamentary Candidate for the Scarborough & Whitby constituency introduces himself and presents his case for election.

Having followed the North Yorks Enquirer since it started in June last year, and the previous incarnation of Real Whitby, I’m in full support of your campaign to expose wasteful spending, malpractice and corruption in local authorities. I feel that these are values in which I and many members of the Scarborough & Whitby branch of the UK Independence Party share.

I’ve been particularly disturbed by your uncovering of the lack of investigation by North Yorkshire Police into the activities of Jaconelli and Savile. It seems that “Say Nothing, Do Nothing” seems to have been the policy of the North Yorkshire Police, Scarborough Borough Council and both the Scarborough and Whitby branches of the Conservative and Labour Party for decades. Disgusting.

I threw my hat in the ring for the position of Prospective Parliamentary Candidate and was adopted by the Scarborough & Whitby branch of the UK Independence Party in November 2014.

Let me tell you a little bit about myself.

I’ve been a Councillor for 10 years. I was motivated to run because of massive over-development on a local housing estate. I felt that people were not being listened to. I originally campaigned on opposing wasteful spending and for much needed local government transparency.

My commitment to opposing wasteful spending has included the highlighting of wasteful spending at Scarborough Borough Council, where council officers are being paid as much as £19.67 per mile, which looks set to continue unabated. Elect more UKIP Councillors and we will bring this to a juddering halt.

At North Yorkshire County Council I have campaigned for a reduction in Councillor allowances, against the Allerton incinerator and against the implementation of the Whitby Park-&-Ride, which led to an additional tax so you have to pay to park outside your own home in Whitby.

I’m currently the UKIP leader on both North Yorkshire County and Scarborough Borough Councils and we will continue our relentless pursuit of getting good value for money out of our local authorities, should you decide to elect us in Scarborough, Whitby and Filey.

My commitment to opposing wasteful spending, particularly the expenses of elected members, stretches back well before the MP Expenses Crisis of 2009. During my time as a local authority elected member, I’ve not claimed one penny in expenses whilst serving my constituents. I believe in leading by example.

I still feel that there is far too much government bureaucracy and the people are still not being listened to, which is one of the reasons I want to be your Member of Parliament.

One of the key issues of the forthcoming election is going to be immigration. The effects of 13 years of Labour and 5 years of Tory and Lib Dem unfettered immigration were sharply felt in January at Scarborough Hospital. Years of underfunding led to the hospital declaring a Major Incident. Too many patients and not enough front line staff to cope.

Our local hospitals must get parity of funding with similar hospitals to ensure the local healthcare system meets the demands of the local population.

UKIP are pledging to cut international development aid and redirect £3billion of those funds into the NHS. UKIP will ensure the NHS is free at the point of delivery and time of need for all UK residents.

Remember, 5.9% of the NHS has already been privatised. 4.4% (or 75% of it) was privatised under the last Labour government with 1.5% (or 25%) privatised by the current Tory / Lib Dem coalition. Only UKIP can protect the NHS.

The result of the Lib/Lab/Con interventions on student tuition fees has led to a skill shortage in the UK, which was filled through immigration. Increasingly, our 16-24s are being stuck in an “Economically Inactive” category and left to rot. With the high prices of tuition fees we are not giving them a route into skilled jobs.

UKIP propose to remove tuition fees for students taking approved degrees in science, medicine, technology, engineering, maths on the condition that they live, work and pay tax in the UK for five years after the completion of their degrees.

Another of UKIPs more high-profile policies is scrapping the HS2 project, which is set to cost £70billion. Delivering only a 20 minute decrease in journey time from Birmingham to London, the scale of the waste of public money is staggering. Not one of the other major parties opposes this waste.

If HS2 is scrapped, we may well see funds for the long-awaited dualling of the A64, which would vastly improve the economy of the Borough. You won’t see the A64 dualled under Goodwill. The Department for Transport, where Goodwill is a minister, have outlined spending plans until 2021 and the A64 is definitely not included.

A vote for UKIP is also a vote for an EU referendum. It is time we had our say about the Brussels Bureaucrats. This most important vote has been denied you by the three major parties. Don’t let the Lib/Lab/Con deny you again.

As you know, on May 7th both Parliamentary and Borough Council elections are being held. You have the chance to sack Goodwill and install an MP who will work for the majority in the constituency.

You also have the chance to remove the Tory Town Hall majority – who are hell-bent on demolishing the Futurist – and install Councillors who will work for the good of the Borough, not their cronies.

Seize that chance. Give us your vote. UKIP will start the process of change and get our towns, our Borough and this country back on their feet.