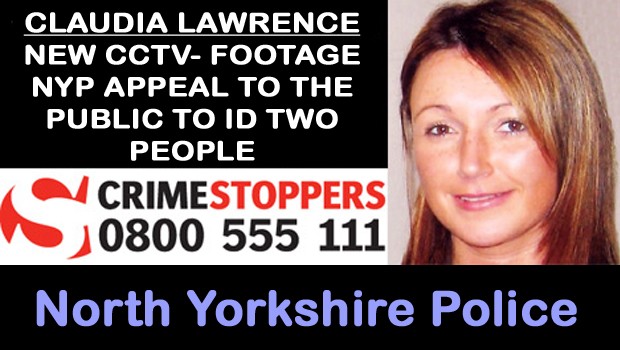 Detectives investigating the disappearance and suspected murder of Claudia Lawrence have screened previously unreleased CCTV footage to help identify two people seen near her home at a potentially significant time.

Six years have passed since the York University chef was last heard from or seen alive.

On the morning of Wednesday, March 18th, 2009, Claudia went to work as normal and in the evening she spoke to her parents on the telephone.

Detective Superintendent Dai Malyn, head of North Yorkshire Police’s Major Crime Unit and the senior investigating officer in the Claudia case, believes she had those telephone conversations with her mum and dad from her house on Heworth Road in York.

“It was the last time anyone ever heard from Claudia,” said Det Supt Malyn.

As part of the ongoing Major Crime Unit review of the case and active investigation, detectives have recently been developing a new line of enquiry with a focus on the alleyway behind Claudia’s home, just off Heworth Place.

The previously unreleased CCTV footage is linked to the growing significance of the alleyway. It was screened on a digital advertising van on Heworth Place between 3pm and 9pm on Wednesday and local residents were leafleted earlier this week and encouraged to view the images.

Det Supt Malyn said: “The footage shows two people who we need to identify. They were caught on a CCTV camera at 7.15pm on Wednesday 18th March 2009, a short while before Claudia spoke to her parents on the phone.

“Of particular interest to the investigation team is the person who is seen walking down Heworth Place which leads to the back of Claudia’s house.

“The person goes out of camera shot but reappears just over a minute later. They appear to be carrying a bag over their shoulder.

“As the person heads back towards Heworth Road they suddenly stop when another unknown person walks past.

“Who is this? Do they live locally? What were they doing?

“If you can help to identify either person, please contact us as soon as possible. We are waiting to hear from you.”

Anyone with information that could assist the investigation should contact North Yorkshire Police on 101, select option 1, and pass details to the Force Control Room. Please quote “Claudia Lawrence” when passing on details.

Alternatively, if you have any information about the Claudia Lawrence case you can contact the independent crime-fighting charity Crimestoppers anonymously on 0800 555 111 or through their Anonymous Online Form at www.crimestoppers-uk.org. No personal details are taken, information cannot be traced or recorded and you will not go to court.