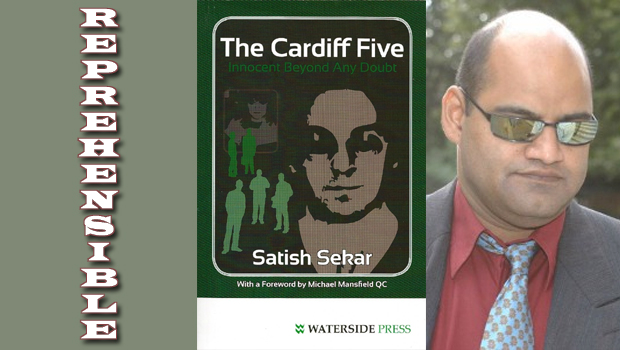 Today’s Guest Author, SATISH SEKAR, is the author of “The Cardiff Five: Innocent Beyond Any Doubt” (Waterside Press, 2012). This essay, first published in June 2012, is reproduced with the kind permission of the author.

John Pope was a suspect originally in the murder of Karen Skipper, which occurred in Cardiff in March 1996. He was eliminated, incorrectly as it turned out. Sadly the late Phillip Skipper stood trial for a crime that he did not commit the following year. An inquiry by West Midlands Police concluded that the decision to prosecute Skipper was justified. It certainly was not. The Crown Prosecution Service (CPS) should not have allowed it to come to trial.

The scientific evidence was not allowed to speak as it could and should have. Blood-staining in an intimate area of the victim’s clothing established his innocence through forensic science techniques that were available at the time. DNA testing established that it was not his blood, nor that of his estranged wife Karen.

That should have eliminated Skipper from police enquiries, but desperate times called for desperate measures. A ludicrous explanation was advanced – one that hinged on Mrs Skipper never having washed resold jeans that she bought at a market several weeks previously. Phillip Skipper was rightly acquitted, but the damage had been done, despite the absence of both smoke and fire.

Nevertheless, his memory – he died of cancer aged just 48 – was put on trial again three times. It was Pope’s DNA and his explanation of the transfer of blood that he claimed caused that positive DNA identification stretched credibility. Was it possible? Yes. Was it likely? No.

Pope never took responsibility for Karen Skipper’s murder. That’s his right, but blaming an innocent man who could not defend himself three times was reprehensible to put it mildly. And after being found guilty again his QC Mark Evans put forward mitigation on his behalf – the closest that Pope ever came to accepting responsibility.

Shamefully, the tariff was exactly the same as before, but there was no recognition from the court of the ordeal of Phillip Skipper and his family, not even the acknowledgement of his innocence that the first trial judge Mr Justice (Sir Nigel) Davis had given. Why not? Instead, the second trial’s judge, Mr Justice (Sir Roderick) Evans had decided to give the jury a bad character warning about Skipper even though he had no relevant convictions.

The Fitted-In Journal covered Pope’s retrial last year (2011) – many other mainstream media did not – and at least some of those that did simply didn’t get it. Another miscarriage of justice was unfolding before our eyes, but few media were interested in it. They still aren’t even though this case bears all the hallmarks of a serious travesty of justice and wrecked lives – many of them.

Karen Skipper’s family had been cruelly deceived. They had originally thought that ‘Ginger’ (Skipper’s nickname), was guilty and after having let him into their family, they hated him with a passion. Skipper died young of stomach cancer, maintain his innocence to the end. They were wrong about him and accept that now, but where are they supposed to put their guilt now? How are they to come to terms with having hated an innocent man?

Neither Victim Support, nor the Miscarriages of Justice Support Service visited either Skipper family – Philip’s or Karen’s – to assist them through a very difficult process that they had to endure thrice with a fourth likely should Pope appeal. That included a girl who had been forced to hear about her deceased father being wrongly accused of murder three times while barely in her teens. Her mother could have painted a different picture of Mr Skipper than the one that emerged at trial, but the court never heard from the mother of his child.

Meanwhile, Pope’s defence could hurl any mud, however nonsensical, with no controls, while they effectively prosecuted Phillip Skipper once more, but without a burden of proof. There was no representation for Phillip Skipper’s estate, or his family, let alone redress. Why not? There was clear and unequivocal scientific evidence that he was innocent.

Pope’s defence even demanded an acquittal for their client if the jury thought that Skipper might have done it. Had the Crown tried to prosecute Skipper on such evidence, it is inconceivable that the Court of Appeal would have given permission for double jeopardy to be set aside.

It was a rehash of the original Skipper trial, including evidence the original prosecutor thought not worthy to put before the jury, a ‘new’ witness whose account beggared belief and there was DNA against someone else – a suspect who had occurred in the original inquiry – Pope. Why was this allowed?

The CPS could not hope to bring such a prosecution to trial now, so why was Pope’s defence allowed to do so? There was outrage aplenty for Bob Dowler when convicted serial killer Levi Bellfield tried to point a finger at him and rightly so, but where is the outrage for Phillip Skipper, who had no opportunity to even defend himself and where is the outrage for his daughter? It was apparently a matter of pride for South Wales Police to put right what they got wrong in the Lynette White Inquiry. They failed to do so, but in the Karen Skipper Inquiry, they refused to even try. Why were they allowed to get away with that?

Where is the investigation of the Karen Skipper Inquiry to establish how the wrong man originally stood trial and if any errors occurred that could have prevented repetition? In 2009 after Pope’s original conviction I asked South Wales Police to investigate what went wrong. They refused. The result was a colossal waste of public resources, time and unnecessary suffering imposed on a young girl who deserved far better. She still does.

Two trials and an appeal later, there is no excuse for failing to investigate this and other vindication cases thoroughly, but there is one vital lesson to emerge from the Lynette White Inquiry Police Corruption Trial. South Wales Police and the criminal justice system cannot be trusted to put right what they got wrong.

1 This article was originally published in the Fitted-In Journal, which was sadly destroyed by hackers and is no longer available. The content of this article is relevant to some of our projects – hence our republication of it. Satish Sekar is the author of Fitted In: The Cardiff 3 and the Lynette White Inquiry (The Fitted In Project, 1998).This article was uploaded onto this site after the publication of his second book on the Lynette White Inquiry. The Cardiff Five: Innocent Beyond Any Doubt was subsequently published by Waterside Press in 2012. The Colombian scientists listening with disbelief at how the injustice suffered by the Skippers occurred.