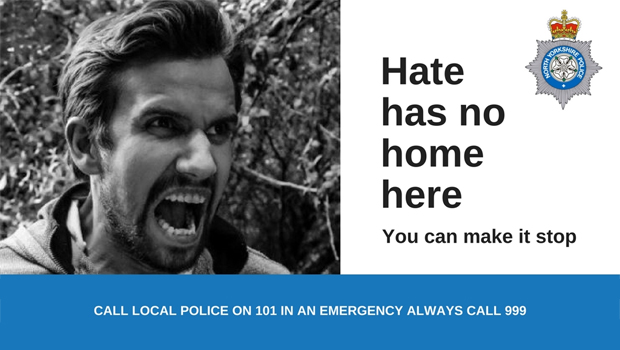 I read with great sadness the statement below which was issued on the North Yorkshire Police (NYP) website concerning the outcome of an Employment Tribunal. 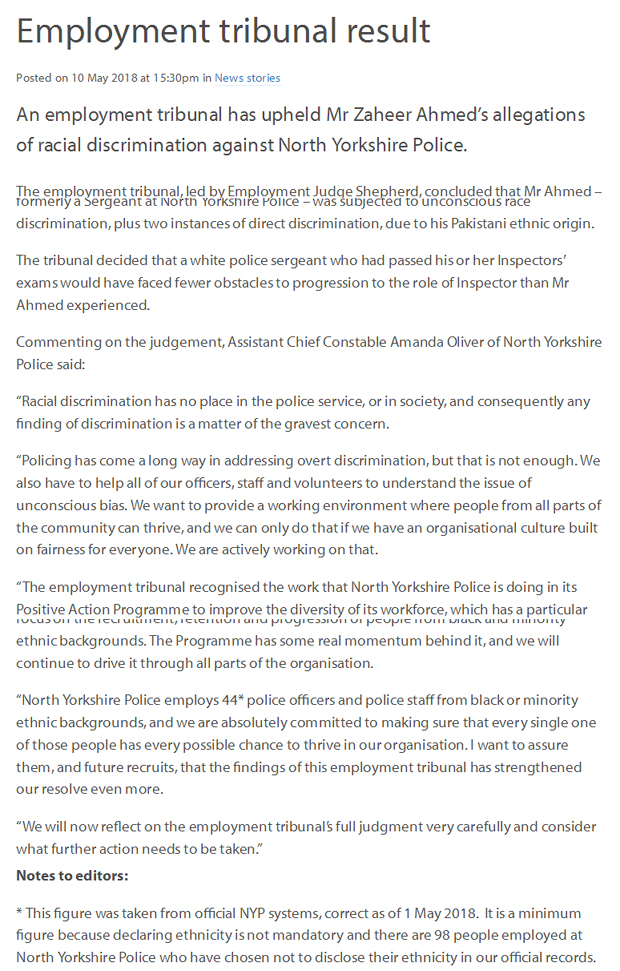 Predictably there is no mention of this on the PCC’s website, thereby keeping this out of the public eye. I asked NYP and the Police & Crime Commissioner (PCC) for North Yorkshire for a copy of the judgment, but my request was ignored. Obviously NYP and the PCC have decided that the public should not have access via the media to a judgment that criticises NYP. 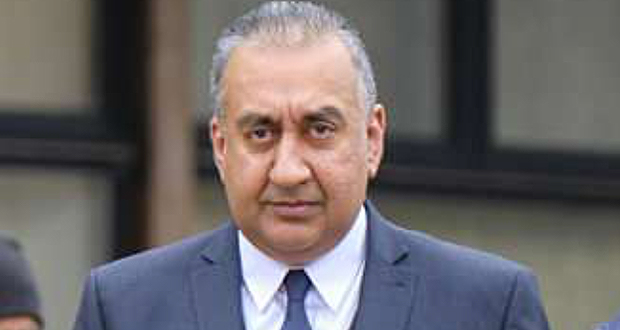 Victim of years of racial discrimination, now vindicated by an industrial tribunal.

However, PCC Julia Mulligan did issue this press statement to the media:

“This is an important judgement for North Yorkshire Police, from which they need to learn. Racial discrimination is not acceptable in any form, and I will treat this matter with the utmost seriousness. I will review the employment tribunal’s judgement in detail, and any necessary action will be taken swiftly to make sure North Yorkshire Police is a fair and welcoming place for all. I will also speak to the Temporary Chief Constable about the approach taken to internal promotions in the round, as clearly improvements need to be made.”

The facts of the case compared to the NYP statement

The full details of Sergeant Zaheer Ahmed’s ordeal are described in this hard hitting Daily Mail article. It describes a deliberate campaign over a number of years to damage his career because he was an Asian, in a police force that is predominantly white, which he alleged does not take racism seriously. 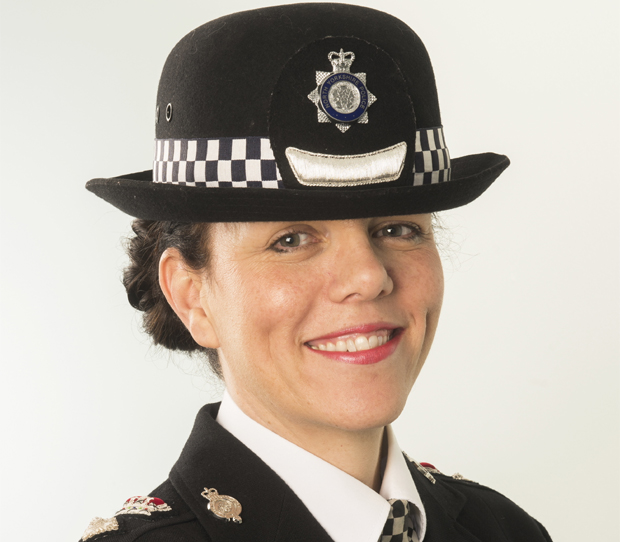 NYP has a Corporate Communications Department with eleven PR wonks in it. Assistant Chief Constable (ACC) Amanda Oliver’s statement is skilfully worded and a masterpiece of the black arts of PR wonkery, of which they are masters.

It emphasises the positive:

In fact, Sergeant Ahmed was deliberately discriminated against in favour of less capable white colleagues for many years by multiple NYP senior officers. He claims he was also racially abused by prisoners but their comments were not pursued. According to an excellent article in York Press, two cases of “direct discrimination” occurred. Yet direct discrimination is not mentioned anywhere in ACC Oliver’s statement, only the milder concept of “unconscious bias”.

How many black officers does North Yorkshire Police actually employ?

I am unable to answer that question.

I have asked NYP and PCC Mulligan to confirm the figure, but my request was ignored. According to ACC Oliver’s statement above:

*This figure was taken from official NYP systems, correct as of 1 May 2018. It is a minimum figure because declaring ethnicity is not mandatory and there are 98 people employed at North Yorkshire Police who have chosen not to disclose their ethnicity in our official records.”

According to Mr Ahmed quoted in the Daily Mail, “As of March 31, North Yorkshire Police did not have a single black officer on its force.”

North Yorkshire Police was criticised in 2012 by Racial Justice in North Yorkshire (RAJINY) for not being robust in tackling racially motivated crimes. BBC report here. Interestingly, the NYP spokesperson that responded to these comments was ACC Sue Cross.

ACC Cross was the officer who responded to the NYE’s allegations about the Peter Jaconelli and Jimmy Savile paedophile ring that operated openly in Scarborough with the full knowledge of NYP, by stating there was no evidence to support our allegations. Following an investigation by the BBC, NYP was forced to climb down and admit our allegations were accurate. Effectively quashing ACC Cross’s report. Arguably this was the worst investigative failure in the history of NYP. However I digress.

In October 2015, North Yorkshire Police was criticised by the Prime Minister (when she was Home Secretary) for not having a single black officer. BBC report here.

It is alleged by Sergeant Ahmed that nothing has changed since 2015. If this is so, then it appears obvious that the NYP command team and PCC Mulligan have consistently failed to address this issue.

In her statement above, PCC Mulligan states:

“I will also speak to the Temporary Chief Constable about the approach taken to internal promotions in the round, as clearly improvements need to be made”.

That is so. However, typically of PCC Mulligan, her statement does not go far enough.

It must have been clear within NYP that Sergeant Ahmed was being discriminated against. Yet apparently, no senior officer (Inspectors, Chief Inspectors, Superintendent or Chief Superintendents) or any chief officer intervened.

There is no mention of any disciplinary action being taken against the officers of inspector rank and above that were responsible for discriminating against Sergeant Ahmed, or against the senior and chief officers that allowed racial discrimination within NYP to go on unchecked. Compare this to the situation in the Metropolitan Police (a force that is committed to diversity and opposed to discrimination), where a Commander (equivalent rank to ACC) was recently placed on restricted duties and investigated over allegations of discrimination.

According to ACC Oliver’s statement above:

“The judgement of the employment tribunal clearly states that the tribunal had no jurisdiction to reach a conclusion on the basis of institutional racism and it had taken great care not to decide this case on that basis”.

This of course does not mean that NYP is not institutionally racist. It only means that the Tribunal was not empowered to examine that question, or issue judgment on it.

How can NYP credibly hold out to the public that it will investigate racially motivated hate crime effectively and impartially, when its own officers have racially discriminated against one of their colleagues for years with impunity?

I felt very sad for Sergeant Ahmed for having to endure this discrimination and losing the career he obviously loved and enjoyed. I also admired him for speaking out and having the courage to take the matter to Tribunal. I will leave the last word to him.

According to the Daily Mail article above, Mr Ahmed said in his witness statement:

“North Yorkshire Police are concerned with appearing as though they care about tackling the issue of lack of diversity, but their actions do not support this.”

NYP and the PCC were provided with a draft of this article and given the opportunity to comment, but chose not to.