Recently, two articles in the mainstream press have been brought to my attention which cause me to take pen to paper.

The first was an article run by York Press concerning the comments published anonymously by people that are apparently serving NYP officers on an employment website. For serving police officers and those with an interest in policing in North Yorkshire, the article by Dan Bean is well worth reading and can be accessed here. It can only be described as well written and incisive. The comments can be accessed on the website www.glassdoor.co.uk .

One serving police officer described a culture of bullying, another criticised inadequate senior management. Initially, I was shocked that serving police officers would take the risk of being so open and then I admired them for their courage in speaking out. Similar criticism was voiced during the misconduct hearing for a member of the Protecting Vulnerable Persons (PVP) Unit, which the NYE covered in this article. Briefly, it was revealed that the NYP PVP unit was a shambles.

I have been writing on North Yorkshire Police since 2011 and the views expressed on the glassdoor website perfectly agree with my own observations.

I have formed a view of this force, as having outstanding frontline police officers, who are routinely let down by failures in chief officer leadership, failures in management/support and a culture obsessed with preserving the public image of NYP. The phrase “Lions led by donkeys comes to mind”.

Following on from the public concern caused by the Rotherham child abuse case, in September 2014 Police & Crime Commissioner Mulligan ordered North Yorkshire Police to undergo a thematic in depth ‘health check’ into its practices and procedures relating to Child Sexual Exploitation, to ensure nothing like the Rotherham scandal could occur in North Yorkshire. Full press release from the Office of the Police and Crime Commissioner in typical gushy professional PR terms here.

The report was issued by Detective Chief Superintendent Simon Mason on the 15th of October 2014 and published by PCC Mulligan shortly afterwards. To quote PCC Mulligan’s comments on the report again in typical professional gushy PR terms:

Now for the actuality……..

At the same time as the report was being issued, according to a Judge’s remarks at the police misconduct hearing and the evidence of police officers that were working in the North Yorkshire Police PVP Unit, it was in fact a disaster area.

In short, contrary to Mrs Mulligan’s assurances, NYP was not able to process and act on intelligence on paedophiles and has an underperforming PVP Unit. It is not clear what action Mrs Mulligan took to resolve these issues.

The other article I referred to above is from the Northern Echo in which Police & Crime Commissioner Julia Mulligan announced that she was going to improve the police complaints system. I read this with great interest. Police & Crime Commissioner Mulligan is undoubtedly right in my opinion that the Police complaints system is ineffective. But wait a minute. Hadn’t I read these remarks somewhere before, a long time ago?

Yes! In April 2014, Police and Crime Commissioner Julia Mulligan described the police complaints system as unfit for purpose at a public meeting in Scarborough, which was attended by NYE investigative journalist Nigel Ward. It was covered only in the NYE and Nigel’s account of it is here. (This again illustrates the importance of having local citizen journalists on the ground covering local events for a free press).

So has anything changed since her remarks in April 2014?

The NYE’s investigation into Jimmy Savile and Peter Jaconelli revealed the existence of paedophile vice ring in Scarborough, after HM Inspector of Constabulary, NYP and the Independent Police Complaints Commission (IPCC) had denied it existed. For all of Mrs Mulligan’s assurances at the meeting, the case was passed back to North Yorkshire Police and no effective action was taken against any police officer of member of the IPCC for the repeated on-going investigative failures into Peter Jaconelli and his accomplice Jimmy Savile: 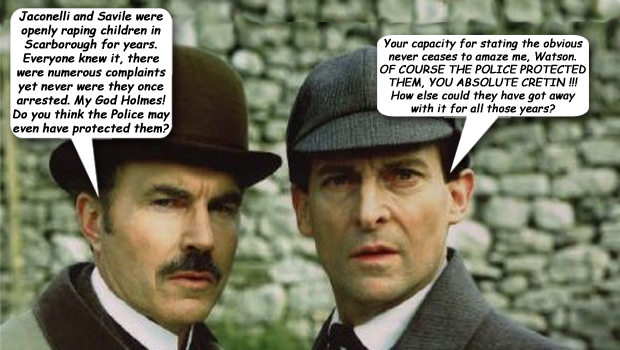 In my view, the ongoing issues facing North Yorkshire Police are as follows:

What is the way forward for North Yorkshire Police?

Reform of the police complaints system would certainly be a start. But Police & Crime Commissioner Mulligan is not the person to lead it, or undertake the other reforms that are necessary to deal with these issues.

Mrs Mulligan has not released what her previous occupation was, or what if any professional qualifications she holds, other than giving a vague description in her biography. This information has been requested by the NYE, but PCC Mulligan has withheld it from us and from our readers.

It will take more than a fluffy public relations politician that is expert at issuing meaningless, soundbite press releases, to deal with the entrenched issues in North Yorkshire Police. Compare the robust approach of PCC Keith Hunter of Humberside, to that of PCC Mulligan.

The NYE has taken a leading role in exposing the failings of NYP and will continue to press for reform of the police complaints system. Only by raising these issues and keeping them in the public eye will there be any pressure for change and improvement. I therefore believe the officers who have spoken out, have done the right thing, as has York Press by covering the story.