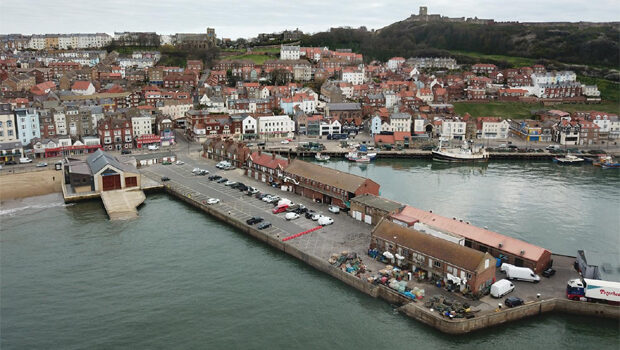 On the morning of Tuesday 15th February 2022, a rather dull meeting of the SBC Cabinet was enlivened by a clinical Public Question from Scarborough businessman, Mr James CORRIGAN.

I would hope that readers may have read and digested yesterday’s Yorkshire Post article by Alex WOOD, entitled “Scarborough Harbour ‘could be owed millions of pounds in income going back half a century'”, covering Mr CORRIGAN’s intervention by way of the Council’s provision for Public Questions.

Further details of the issues at stake can be reviewed by reference to my Enquirer articles “The Rape of Whitby Harbour” (pub. 07/07/21) and “The Pillage of Scarborough Harbour” (pub. on 11/07/21) – well ahead of the curve.

I refer to the Scarborough Harbour Act 1843 as amended by the Scarborough Harbour Act 1876. Is this legislation being complied with regarding the income generated from the harbour (including Dues, Rents and Parking revenue) and the continuing requirement to ring fence all the income from the Harbour and West Pier for its future upkeep and maintenance?

Readers may wish to peruse the attached excerpt from statute:

The clear implication is that, in Mr CORRIGAN’s view (one suspects, in LUPTON FAWCETT’s view), revenues from Scarborough Harbour were required to be (in modern parlance) “ring-fenced” for Harbour maintenance and operating costs – though this has apparently never been the case.

The Leader, looking haggard and far older than his 72 years (come July), rolled out a prepared stone-wall response to Mr CORRIGAN’s Question, drafted (no doubt) by the Director of Legal, Mrs Lisa DIXON:

“The Council is of the view that it is in compliance with its legal obligations in relation to the operation and maintenance of the Harbour. So thank you for your question.”

That view is, of course, the same view that the Council has been espousing in relation to Whitby Harbour for some years – ever since the Fight4Whitby group challenged the s.151 Officer’s accountancy methodology – and this is why the Council’s 2015/16, 2016/17, 2017/18, 2018/19, 2019/20 and 2020/21 accounts have not been signed off by External Auditor MAZARS LLP, who has instructed SBC to seek a ruling from the Courts on the matter, not later than 31st December 2021. (Senior opposition Councillors have been unable to confirm that SBC Officers have complied with the MAZARS directive).

“Can you clarify if any order has been made under the Harbours Act 1964, or some other legislation, to revise irrelavnt references – i.e. has the 1843 Act, the 1876 Act or the 1964 Act been repealed, amended or replaced by anything other than primary legislation?”

At this, the Leader could do no better than resort to parroting his earlier stonewall:

“As I said to you earlier, the Council is of the view that it is in compliance with its legal obligations in relation to the operation and maintenance of the Harbour.That’s a s much as I can tell you at this moment in time.”

In other words (true or false), “I don’t know. That is as much as Mrs DIXON has told me.” (Do we have a well-trained parrot leading the Council?). But the Council cannot claim ignorance of the 1964 Act, since it has relied upon it in an FOIA response dated 10th June 2020. And if the Council has, at some stage, sought and successfully obtained a Ministerial Order to amend the 1964 Act in such a way as to abolish the “ring-fencing”, why did the Leader not simply inform Mr CORRIGAN to that effect? Mrs DIXON was present at Cabinet and she, too, offered no explanation. Certainly, if such an Order exists, it would have been remiss to the point of deception for neither the Leader nor the Director of Legal to have declared as much.

The present situation suggests that Court action parallel to the Fight4Whitby action is about to commence, challenging s.151 Officer Mr Nick EDWARDS’ accountancy methodology in respect of the Scarborough Harbour Undertaking – to add to his difficulties in relation to the Minimum Revenue Provision (MRP) accountancy methodology of the Council’s assets depreciation.

It is worthwhile making a brief digression at this point. Quite aside from the possible (or probable) eventuality that the Council may have to withdraw many millions of pounds from its General Fund in order to establish separate “ring-fenced” accounts for both the Whitby Habour Undertaking and the Scarborough Harbour Undertaking – thus making it almost impossible for the Council to balance its Budget – there is also the matter of how this will impact the Leader’s widely-opposed aspiration to ‘regenerate’ the West Pier as a tourism attraction, at the expense of the fishing industry.

Over £200,000 has already been expended on ‘feasibility studies’ – as we learned from an FOIA request submitted by Mr CORRIGAN on 11th January 2022 – money which the Leader was happy to throw at his pipedream in an attempt to secure £6.5M funding from the government’s Towns Fund for Scarborough (contingent upon ‘regeneration’ from a strictly tourism perspective); commercial use of the West Pier – e.g. facilities for the storage of nets, bait, crab- and lobster-pots, tanks, etc. – would not qualify for one penny.

Artist’s impression of the Leader’s ‘Masterplan’, with its cafés and kiddy-fountains, shows clearly the extent to which the fishing industry community (for whom the West Pier was initially created and subsequently protected by successive legislation) has been disregarded and marginalised – one might say ‘sacrificed’. 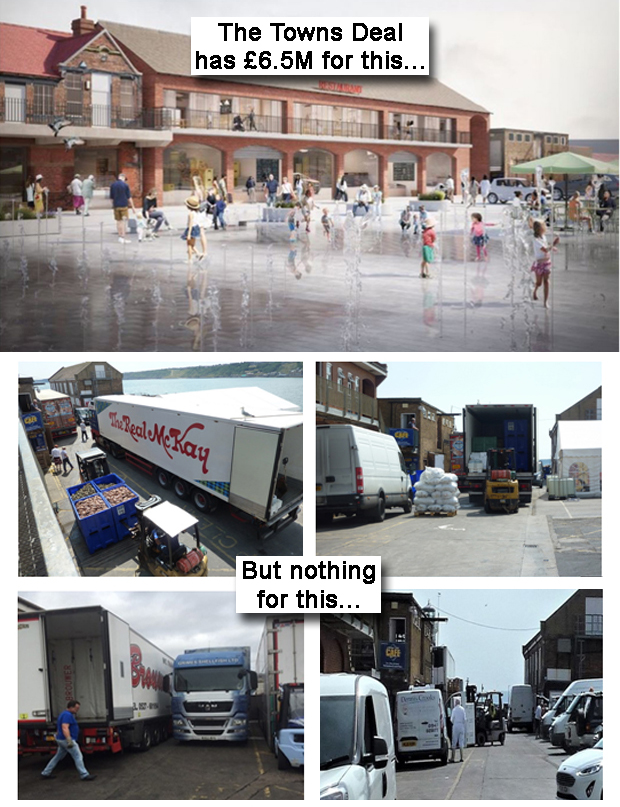 And the reason that this administration is intent on ploughing the tourism furrow at the expense of the fishing industry (and, remember, all the Sandside and Pier Road businesses will also suffer significantly from a major reduction in car-parking spaces if the ‘regeneration’ were to go ahead as planned)?

In my view, that £6.5M Towns Fund money will go the way of all ‘grant funding’ – a large proportion of which will be spent on keeping Officers’ bums on seats in the Town Hall (salaries and pensions) as well fuelling the consultancy ‘industry’ (a.k.a. “jobs for the boys”).

This may explain why, once again, I find my inbox full of reiterations of the same question:

Why is Castle ward Councillor Janet JEFFERSON, Portfolio Holder for Corporate Resources, disregarding the entreaties of her electors – including the two gentlemen (Fred NORMANDALE and Bob ROBERTS) who also asked Public Questions to Cabinet on behalf of the fishing industry – as she did over the recent ARGOS ‘regeneration’ proposals?

She seems to me to be willing to sacrifice a potential seat on the new Unitary Authority on the altar of Scarborough Borough Council grasping after loans and grants to pursue schemes the chief beneficiaries of which are certainly not her own electors or, for that matter, residents of the Borough at large.

I believe I am having one of those Blackadder moments! 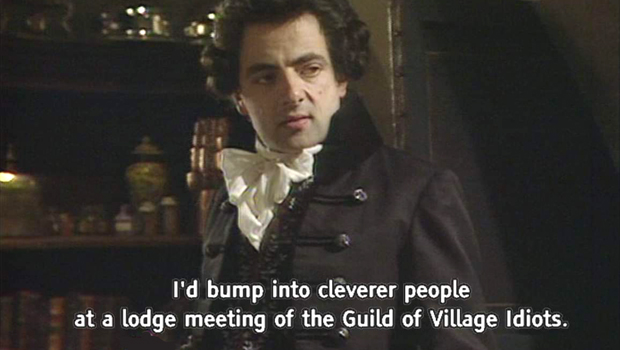