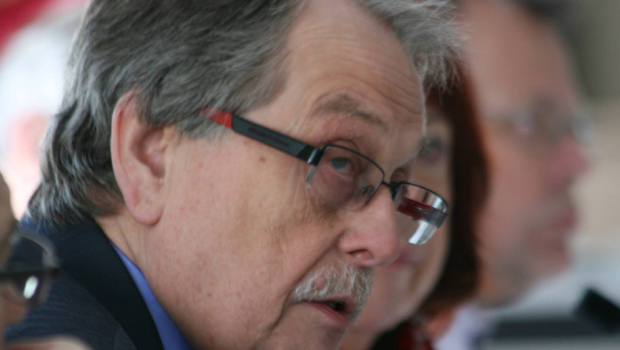 Two months down the road, readers may not recall my article “Whitby Harbour: Payback Time” (pub. 25/07/21), in which I reported on the Council’s Resolution to make application to the Court in precise accordance with the Formal Recommendation of MAZARS (the Council’s External Auditor), seeking a ruling on the exact extent of the Whitby Harbour Lands and associated revenues, with a view to extracting that sum from the General Fund and depositing it in a ring-fenced Whitby Harbour Undertaking account (thus risking an unbalanced budget, going back to at least 2015/16 and, very probably, to 2005/6). There is a legal requirement on all Councils to set a balanced budget.

To understand the full significance of what here follows, I hope readers will take the trouble to revisit my article.

Failing that, here is a reminder of the MAZARS Recommendation:

Astonishingly – to anyone unfamiliar with the serial duplicity of SBC’s rogue Officers, the Resolution of Full Council appears to have been not merely ignored by senior Officers; they appear to have adopted a diametrically opposite cause of action. The following email, from Conservative Borough & County Councillor David CHANCE [Con.] (pictured above) to SBC Leader, Councillor Steve SIDDONS [Lab.], explains this very clearly:

Please find below a note of my initial question to you in council yesterday, to which you answered that Officers are working to seek clarity in line with the minute.

“The accepted protocol between Members and Officers of a Council, is that Members of Council set Policy, at their meetings and Officers carry that policy out. Can the Leader assure me that in relation to the Minute of the 23rd July 2021, “RESPONSE TO STATEMENT OF REASONS ISSUED BY MAZARS LLP REGARDING OBJECTION TO THE STATEMENT OF ACCOUNTS FOR THE YEAR ENDING 31 MARCH 2016″ that this is the case and that Officers are working to discharge the minute as written?”

Given that response, I then made the following statement and asked five questions, which given your answer to my initial question, I would have expected you to be able to answer. You deflected my questions to the Monitoring Officer who again did not answer my questions but hid behind the screen of ‘this is subject to legal action and the advice of our barrister.’

My questions are not controversial, they do not seek a statement on any action the Council may have initiated, but rather the reasons and the authority to take the said actions.

The Monitoring Officer sought to assure the meeting that the result of the Officers’ actions would be referred back to the Audit Committee.

We are past that! The resolution of Council is quite explicit, it makes no mention of reference back to the Audit Committee at all. It also explicitly ruled out seeking clarification on the four car parks referred to in the Council Letter before action, widening it up to seeking clarity on what comprises harbour lands.

The resolution of Council is what the Officers should be working to, not seeking to circumvent.

The resolution of Council is the final instruction to Officers.

I would therefore ask that you address the questions below Subsequent to the Council Meeting Held on Friday 23rd July 2021 and pursuant to minute of that meeting, it has come to my notice that this Council has sought to judicially review the Auditor’s decision subject to the accounts, which it has accepted, and as part of those proceedings have issued a Letter before action, prior to seeking a declaration from the court by way of Judicial Review, that the car park land does not form part of Whitby Harbour and in the alternative that the revenue received have been properly accounted for.

Applications for Judicial Review need to be made within 3 months of the date of the decision that is being challenged. As the Auditor’s decision was issued on 26th March, an application [for] Judicial Review should have been made by 26 June. I Note that in their Letter before action the Solicitors engaged by this Council argues that the decision was not effective until the Council meeting on 23 July.

The fact that this authority procrastinated and failed to call said Special Meeting of council, to consider the Auditors report is no excuse to try to claim that the date should be extended. This Council called said meeting on the last possible date that a meeting could have been called.

If the Courts were to accept that argument, then this Council would have until 23 October 2021 to apply for a Judicial Review for a decision issued on the 26th March 2021. This would not comply with the Auditor’s Statutory Recommendation, which was accepted by this Council on the 23rd July, that this Council must apply to the Courts by 26th September 2021.

Is this argument being put forward to clearly delay implementation contrary to the will of Council?

This means that the judicial review proceedings will only be able to look at the car park land and will not be able to give a resolution with regard to what land is classed as harbour land or not.

The foregoing is contrary to the explicit nature of the minute of Council held on the 23rd July 2021, and this Council’s deletion of the four Car Parks in question from the recommendation of the officers, as contained in their report.

Will the leader inform this Council as to on what or whose authority this action is being taken? and furnish to members any and all correspondence and minutes of meetings held to discuss the matter, to support the decision to flagrantly act counter to the minute and so subvert the will of this Council?

The declaration being sought should reflect the Auditor’s Recommendation, which was accepted in full by Council, to be in accordance with the resolution made by Full Council, as reflected in the minutes. The declaration should be sought under Civil Procedure Rules, not the Judicial Review proposed by SBC, which is a one-sided and unnecessarily confrontational approach.

It goes beyond what the Auditor recommended and, arguably, is not in accordance with the acceptance of the of the recommendation made by the Auditor and, I stress once again, which was approved by full Council. “By Judicial Review” does not form part of the resolution as passed.

Was this decision taken in the hope that the Objector would be prevented from continuing due to potential costs?

Council should seek written confirmation from the Auditor that a declaration, under Civil Procedure Rules, meets his requirements – and is a more cost effective and more appropriate way to seek the declaration. I would remind this administration that a Six-month period is required to overturn a decision of Council.

The minute of Council requires the Executive and Officers to act on the decision of Council, not find a way round it.

In addition, they should act within the period specified by the auditors. Will the Leader, therefore, confirm that officers will be instructed will seek clarity in line with the minute of Council?

Should Scarborough Borough Council fail to seek a declaration from the court to give a view on all of the harbour land, I am sure this will continue to be an area of dispute for both this and the successor Authority. To fail to do so may cause uncertainty for the future Unitary Council and could lead to future court action from that body against those involved in any circumvention of the minute of this Council to seek full clarity on the matter.

And finally, Who is running this Council, the Cabinet or the Officers, because from your response and perceived lack of knowledge yesterday it would seem, contrary to all accepted protocol, to be the officers?

I repeat the five questions here for clarity, they can be found in the above text.

Is this argument being put forward to clearly delay implementation contrary to the will of Council?

Will the leader inform this Council as to on what or whose authority this action is being taken? and furnish to members any and all correspondence and minutes of meetings held to discuss the matter, to support the decision to flagrantly act counter to the minute and so subvert the will of this Council?

Was this decision taken in the hope that the Objector would be prevented from continuing due to potential costs?

Will the Leader, therefore, confirm that officers will be instructed [and] will seek clarity in line with the minute of Council?

And finally, Who is running this Council, the Cabinet or the Officers, because from your response and perceived lack of knowledge yesterday, it would seem, contrary to all accepted protocol, to be the Officers?

Thus, it is clear that, far from following Full Council’s Resolution to the letter as they are duty-bound to do, Officers have apparently on their own initiative ignored that binding instruction and instead chosen to make application to the Court to seek a Judicial Review of the MAZARS Formal Recommendation.

If Officers were free to dictate the Council’s actions in disregard of Councillors’ Resolutions, why would we bother having elections? If Officers were to do so in service of their own interests, surely that would be a criminal offence, would it not? Misfeasance in Public Office, for example?

Not only is this yet another case of the tail (the rogue Officers) wagging the dog (the elected members) – as I have been reporting for years – it would appear that our less than illustrious Leader, Councillor SIDDONS, is so inept as to be woefully unaware of being wagged himself. Either that or his tottering administration is so reliant on Officers’ support that he has voluntarily surrendered his first duty – to control the Officers of Paid Service.

On the subject of our hapless Leader; remember his delusions of grandeur regarding that futile (and wasteful) bid to establish two Unitary Authorities in North Yorkshire?  That miserable failure was the subject of an Enquirer prediction a year earlier. 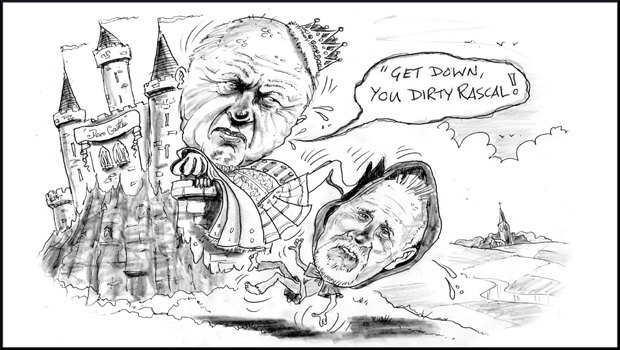 It is noteworthy that, amongst a whole raft of Senior Officers drafted in from all over the County, some names are conspicuous by their absence. Clearly, the new Authority has no use for SBC’s s.151 Officer, Finance Director Mr Nick EDWARDS, its Monitoring Officer, Director of Legal & Governance Mrs Lisa DIXON, or its Commercial Director Richard ‘The Brighton Binman’ BRADLEY. The penny may not have dropped yet for SBC’s Head of Paid Service and CEO, Mr Mike GREENE – the new kid on the block – but it is apparent that the new Authority has no use for any of his subordinates. Then again, who does? One may even suspect that the name Mike GREENE (who, by the way, has not responded to my Open Letter – indeed, the entire Borough could have been knocked down with a single feather, had he done so) appears on the blueprint only as a gesture of politesse to a ‘caretaker’ manager. Other than GREENE, Scarborough has no finger in the Unitary pie. 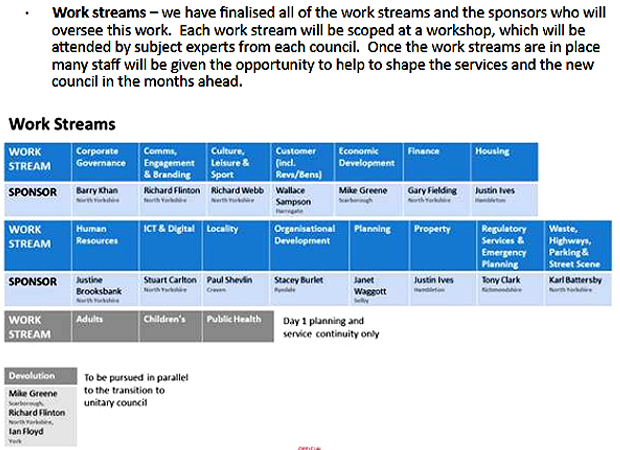 Of course, this may be nothing more than a consequence of Leader SIDDONS’ foolhardy characterization of the new Unitary Authority as “a dog’s breakfast”.

Before he leaves, he could do us all a great service by suspending Councillor Theresa NORTON [Lab.] from the Labour Group for bringing the Council, the Borough and the Party into egregious disrepute.

Far more likely, in this topsy-turvy Labour-led administration, is that it will be Councillor David CHANCE [Con.] who appears before the Standards Committee – for having the temerity to challenge those magnificent Officers who have worked so hard to further someone’s interests. Ours? The taxpayers’? Perish the thought.