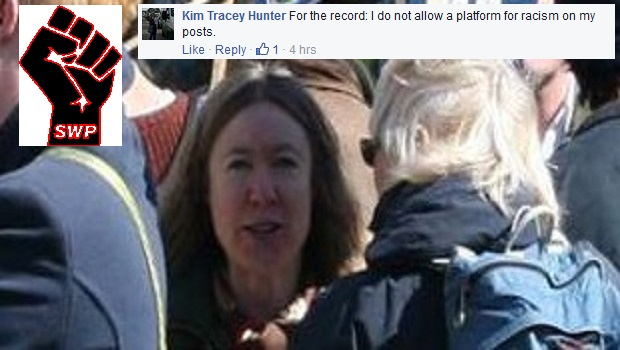 It appears the Scarborough ‘Frack Free’ movement has been heavily infiltrated by the ‘professional’ protesters, placard carriers and self-professed extremists of the Socialist Worker’s Party (SWP).

The ‘revolutionary’ party, which covered up nine rapes within its ranks in 2013, appears to have taken over the Frack Free group in Scarborough and is attempting to use the anti-fracking movement to recruit new members. 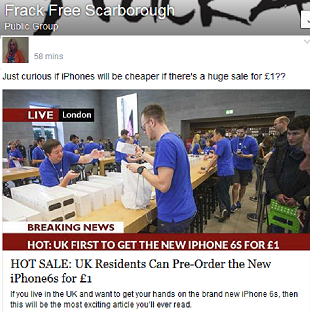 The widely derided rape apologists, who protest loudly against capitalism, but hilariously use Apple devices to update their Facebook site which also contains information on how to obtain the latest iPhone6S for just £1. Hardcore anti-capitalists indeed!

The Scarborough branch of the hard left Trotskyist party, which is partially composed of a number of local school teachers, spent their spring handing out ‘Stand Up To UKIP’ leaflets in Scarborough town centre and delivering them door-to-door in the build up to the May 7th General Election, but none of their membership stood as a candidate in the elections. The leaflets declared that UKIP is a racist party.

It is to be hoped that any leafleting costs borne by members of the local branch of the SWP have been fully declared in accordance with electoral law, otherwise a criminal offence may have taken place.

I thought the SWP meeting advertisement might be an opportune moment to publicise the next meeting of the local UKIP branch. I couldn’t be more wrong. The chairman/woman/person of Frack Free Scarborough, one Kim Hunter, deleted my tongue-in-cheek comment, called me a racist and didn’t allow me to reply to her comment! It seems Kim has much in common with her namesake in North Korea where free speech in concerned.

I did point out to the chairman/woman/person of Frack Free Scarborough that what she accused me of was actually a criminal offence. If she was so confident of her assertion that I was a racist, she could take a trip to Northway and report me to North Yorkshire’s finest. Alas, Kim Jong Hunter didn’t accept the generous offer.

Out on the town with Kim Jong Hunter and her SWP chums was former St Augustine’s Head Teacher, Jesus Echevarria, who now works as Head of RE at Headlands School in Brid. Jesus was pretty cross and had some unchristian words to say about UKIP people. He deleted his Facebook account shortly after commenting and it didn’t resurrect on the third day. It is hoped he doesn’t bring his nasty brand of politics into the classroom.

Joining Jesus, Kim Jong Hunter and the rest of their SWP chums on their anti-UKIP crusade was Dergolin aka Yusef aka John, who has a bit of thing for guns. Looks like there might be an SWP revolution in the offing after all!

Frack Free Scarborough are appealing for a ‘Fighting Fund’, which will presumably be used to buy pellets for John’s gun. Alas, only one person has donated at the time of writing this article and the grand total raised so far is £20.