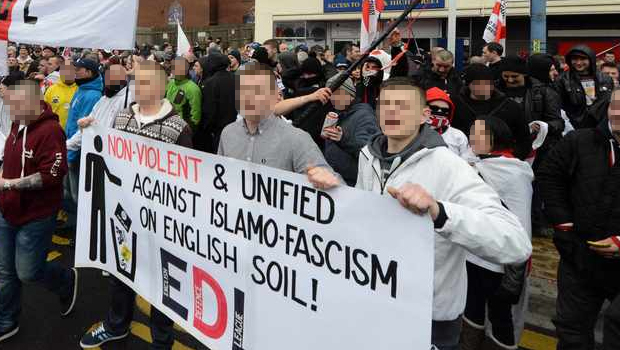 For the second time in six weeks members of the far right English Defence League (EDL) and activists from the hard left group Unite Against Fascism (UAF) aka The Socialist Worker’s Party aka ‘Unity’ marched in Scarborough.

A very high Police presence was visible in the town centre to ensure the two groups didn’t clash and that Christmas shoppers could go about their business. Police from as far afield as Cleveland were drafted in to the town centre to marshal the demonstrators.

The Police attempted to negotiate with the hard left UAF demonstrators to get the demonstration to pass off peacefully, but the UAF wouldn’t engage with North Yorkshire Police.

The UAF attempted to block Westborough to stop the EDL marching up Newborough. The Police served the UAF with a notice under Section 14 of the Public Order Act 1986 and required them to move to Aberdeen Walk.

Three UAF protesters didn’t do as instructed by the Police and a 59 year old local woman and two local men aged 54 and 21 were arrested for breach of the peace.

The large Police contingent ensured that the demonstrations passed off peacefully, although traders report business was a little slow. There were no reported arrests of members of the English Defence League.