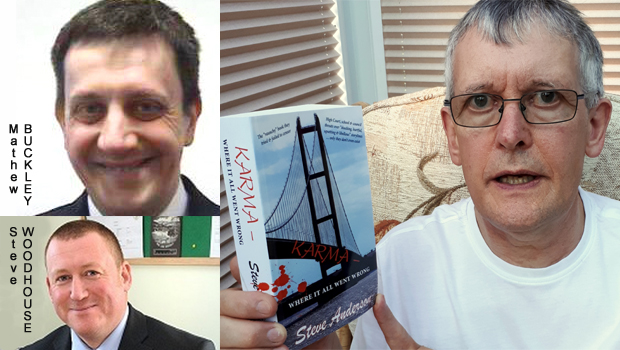 Two East Riding officials caught up in a bizarre libel dispute revealed exclusively by the North Yorks Enquirer on 8th July 2018 are facing renewed calls for an explanation.

Novelist Steve ANDERSON’ s attempts to identify the source of the threatened legal action has been thwarted by denials, accusations and counter-accusations.

Mr ANDERSON, of Holme-upon-Spalding Moor, attracted the wrath of East Riding of Yorkshire Council’s legal department last November when about to publish his second book, entitled “Karma – Where it all went wrong”. Without warning, ERYC’s legal department hired outside law firm Lupton Fawcett LLP of Leeds to threaten him with a High Court injunction and an order for costs if he failed to submit a detailed defence – within three working hours.

The author was accused of “having libel at the front of his mind” when it was alleged that some of his fictional character-names bear a suspicious resemblance to real people at the school where his wife has worked for approaching thirty years – Holme-on-Spalding Moor Primary School.

Having read Steve’s ingenious thriller, and having made my own enquiries via contacts in the locality, I have been unable to discern anything of the sort. And, curiously, the Holme-on-Spalding Moor Primary School has taken the extraordinary step of ‘temporarily’ omitting the staff roster from its website. 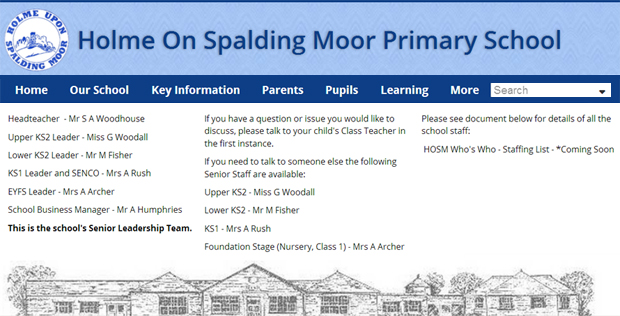 But neither of the two main East Riding officials involved in the Lupton Fawcett claim, Headteacher Steve WOODHOUSE and Head of Legal & Democratic Service Mathew BUCKLEY, agree on precisely who was behind the litigation threat, which has already cost local taxpayers thousands of pounds. Or, to put it another way, neither of them will own up.

Headteacher Steve WOODHOUSE, whose appointment followed a disastrous OfSTED Report in February 2014, has always maintained that the action was taken by members of his staff while he was away from the premises and that he had nothing whatsoever to do with it. This is reminiscent of the classic “The dog ate my homework!” excuse, also known as “It wasn’t me, sir – some big boys did it and ran away!”.

But Mr BUCKLEY says not, insisting “We were contacted by the head of the school.”

Not one of the names listed in Mathew BUCKLEY’s correspondence with Mr ANDERSON appears in the book in any remotely defamatory context. (There was a ‘James BOND’ in my class at school, but I do not recall Ian FLEMMING being sued by the Council).

“You’d have thought they’d have all got their stories straight by now. One of these two men was responsible for instigating legal threats against me, but neither will come clean. Mr Woodhouse has ignored every one of my letters, while Mr Buckley has now decided, having laid the blame at the Headteacher’s door, that he will not enter in to any further correspondence with me. There’s been a similar response from the school’s Chair of Governors, Chris Lemming.”

Mr ANDERSON also makes the very valid point that the onus is not on him to prove he is innocent of defamation. And it should not be forgotten that local authorities are not empowered to take defamation actions against members of the public anyway.

Having been driven to the depths of frustration and despair by the prospect of having to defend an action which should never have been contemplated by ERYC, and for which no particularised evidence has ever been adduced and no individual ERYC employee will admit to having instigated, Mr ANDERSON is now determined – notwithstanding the David-and-Goliath nature of the struggle ahead – to seek remedy for the damage to his health and reputation, through the Courts and/or Tribunals.

“This vindictive, completely unjustified behaviour has cost me thousands of pounds in lost revenue, because I’ve been unable to promote the paperback, and it has made it impossible for my wife to continue in her job at the school because some of her colleagues – though no-one has owned up to it – applied nothing but guesswork and fantasy to claim that they were being defamed. They took ruinous action against me without a shred of evidence that I was about to defame anyone – and continued on their vindictive course when told time and time again that I was innocent of any such allegations.”

Viewed in the context of the many other criticisms and allegations against ERYC’s Mathew BUCKLEY, the evasions of Headteacher Steve WOODHOUSE and Chair of Governors Chris LEMMING make it virtually impossible for any unbiased observer to disregard the nagging suspicion that paid public servants are lying their heads off to cover one another’s incompetence.

Now that he has the bit between his teeth, Mr ANDERSON is intent on justice at any price. Join the queue, Steve!