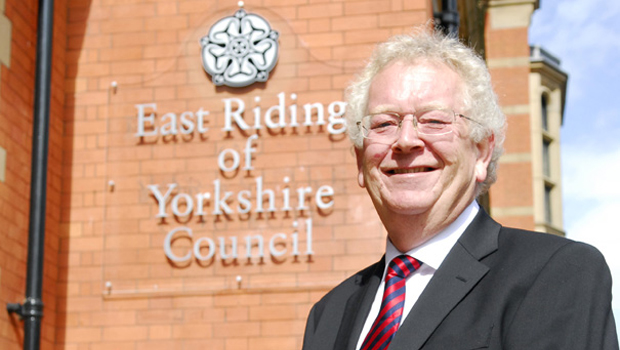 Following publication of my article “ERYC: Leader PARNABY Faces Corruption Allegations” on Saturday 1st April 2017, I have been inundated with questions concerning the wider implications of the serious allegation made by Cottingham developer Mr Peter ROBINSON against the Leader of East Riding of Yorkshire Council (pictured above) and certain Officers – questions which I am not yet ready to answer.

What I can report is that I emailed Mr ROBINSON offering an opportunity to comment – an offer which he is yet to accept, or decline.

However, at about 5:00pm this afternoon (Monday 3rd April 2017), my email client began ‘pinging’ like an arcade machine announcing a jackpot – this in consequence of an email sent by Mr ROBINSON at 4:05pm today, to the same recipients as last time, in which he states:

I Thank those councillors interested enough to contact me on this matter.
Some of you did comment on the length of my letter to Nigel Pearson and I do apologise for this but it was necessary to ensure that as full an account as possible was placed on record.
Others have requested that I provide follow up information and this I attach to this email.
The present situation I believe is that Nigel Pearson although taking an age to reply to my letter did not actually provide any clarity. He ignored the many points put forward and simply answered a question which was not made.
The only conclusion remaining therefore is that no one has been able to refute any of the allegations and furthermore even denials have been missing from all those concerned.
In order to progress this matter further a starting point has to be where are the reports submitted by the five senior council officers following the Pre Application Meeting? which of these officers was responsible for collating this information in order to provide the paid for written response as per the councils contract? and why was this not done?
I look forward to your further comments.
Peter Robinson

Mr ROBINSON attached three PDF documents to his email which, for the avoidance of doubt, are now in the public domain, having already been transmitted to third party recipients.
I present them here in chronological order:
First, Peter ROBINSON’s reminder of 13th March 2017 to CEO Nigel PEARSON, who had hitherto disregarded Mr ROBINSONS’s previous letter of 7th February 2017 (reroduced in last Saturday’s article):

Following this reminder, in an email dated 17th March 2017, Nigel PEARSON would appear to have offered a token response, signally absent any attempt to address Mr ROBINSON’s substantive issues:

Finally, Mr ROBINSON has published his own response, dated 20th March 2017, to the now former CEO Nigel PEARSON (replaced as of today by Mrs Caroline LACEY):

I have been unable to reach Mr PEARSON for comment.

I can, however, confirm that I have today lodged a Formal Corporate Complaint with new CEO Caroline LACEY against Head of Legal & Democratic Services Mathew BUCKLEY on the grounds that he point-blank refused to process my Formal Corporate Complaint against her predecessor Nigel PEARSON, on grounds of his having committed an ultra vires act. Mrs LACEY has not acknowledged my email.

Curiously, with the Council apparently on the brink of total meltdown, only one ERYC Councillor has approached the Enquirer with a view to offering a comment for publication.

“Given the allegations over recent days, I believe Councillor Parnaby and his Cabinet must resign with immediate effect. I believe that allegations of this sort can only bring the Council into disrepute. The Cabinet must now be replaced by a cross-group anti-corruption coalition to bring much needed credibility to the East Riding.”