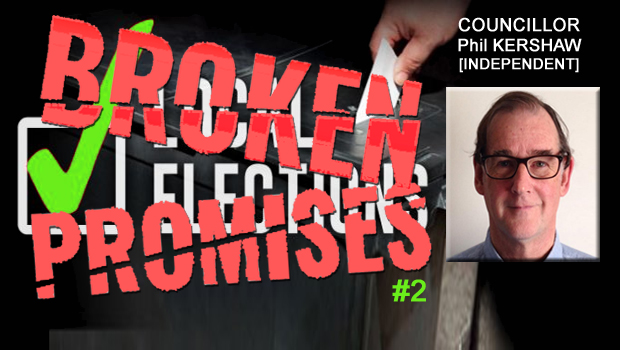 Second on the list is Cllr Phil Kershaw who represents Woodlands ward.

On the Friday 12th July 2019 Cllr Kershaw attended a full council meeting and voted in favour of spending £22million of Borough taxpayer’s money to demolish the old Argos building and redevelop the site. The redevelopment would see accommodation built for 195 people with a small number of retail units.

Information provided by SBC to councillors and the public estimated the new building would be worth £7.5million on the open market, some £14.5million less than the borrowing Cllr Kershaw signed the Borough taxpayer up for.

The £22million of additional debt Cllr Kershaw signed the ratepayers of Scarborough Borough Council up will see an extra £300 debt added per registered elector giving a total debt per head of £650.

Let’s take a look at Cllr Kershaw’s May 2019 election promises.

Why is it all investments made on behalf of the Borough taxpayer make a loss or at best have a worse return than the meanest current account? The Local Government training manual seems to have an odd view of what an investment actually is. If the project was nearly cost neutral to the Borough taxpayer then I doubt anyone would raise an eyebrow. Chucking £14.5million away on such a risky project seems folly.

As a newly elected Independent Councillor, and one who supported the Argos redevelopment in Scarborough, I feel I must comment on your recent article criticising this decision and your perceived, as I see it, erroneous view, that this somehow went against the election promises myself and many Independents made in May. One thing I have learnt in my 65 years on this earth is that life is never black and white. There are always pros and cons to any decisions we have to make in life, and, as you have pointed out, nowhere is this often unpalatable reality more obviously demonstrated than by the decision we councillors had to make over whether we should, or should not, support the Argos development proposal.

I knew if I was elected in May that there would be many difficult decisions to be made, and I was fully prepared for this. As an Independent I would not be in a position to be ‘whipped’ by a political party, and could, therefore, make my own decisions and follow my own conscience to deliver what I considered would be the best experience for Scarborough Borough. However, I did not think the difficult decisions would be on me so soon after election. I canvassed, as mentioned, on a ticket that I ‘would never back any projects which require the council to issue unsecured loans’. This promise was informed by recent experiences such as the Alpamare Water Park debacle and its £9 million unsecured loan. I honestly felt, and still do, that any new project should be paid for by those who want to profit from whatever business they intend to run. However, you cannot apply a blanket approach to all investments or decisions.

Therefore, as I am sure many other councillors did, I thought long and hard over this decision, particularly in light of my election promise. Indeed, I must say, my initial feeling was very much to not support the investment and vote against the proposal. I discussed the options with respected colleagues at length, mulling over the pros and cons, knowing it to be a risky investment for many reasons. I had a one-to-one meeting with SBC director of finance to explore if all avenues had been looked at. One aspect of the proposal that did concern me was the fact that Coventry University would only guarantee a 10 year term of occupation, and that future terms could not be guaranteed.

I put these concerns to the director of finance and must say that he did not try to persuade me either way, only laying out the facts of the deal and answering any questions I put to him honestly, and I would say, in a very business-like manner. He confirmed that there were indeed risks and that the university could pull out after 10 years; but my view is that given the quality of the accommodation and the position of the building the university will be using this site for many years to come. Although this is just one issue which concerned me I hope that how I sort to establish what the consequences of supporting the proposal would be, and tested officers claims, allowed me to attend the many presentations, given to all Councillors, with an informed mind and satisfied that, before I voted, I had given the project as much thought and consideration as I could.

Consequently, on balance, as is recorded, I voted to support the decision. Although I still have reservations I made this decision because the balance as I saw it weighed towards the benefits the scheme would bring to Scarborough Borough. Indeed, I think that this scheme should be viewed as an investment in Scarborough and the residents of the Borough, not simply as a profit making scheme. The scheme will bring a huge investment into one of the most under-privileged areas of Scarborough, it will remove a derelict eyesore, and will hopefully kick start the regeneration of the whole area.

The project will also improve our age demographic, perhaps, even reversing, to some extent, our ageing population. I honestly believe that the more young people who come to study at Coventry University the more are likely to stay and work here; bringing the enthusiasm and vibrancy of youth to our Borough. Moreover, the presence of all these young people will I feel benefit the economy of the area and be beneficial to the Borough as a whole. Additionally the proposed new town square will compliment the newly regenerated market hall brining benefits, some of which undoubtedly we have not even thought of, to Scarborough and the wider Borough.

I firmly believe that investments such as the proposed Argos development will encourage outside investors to look favourably on the Borough of Scarborough and will attract them to invest their cash in other parts of our Borough. If we can demonstrate that we as a council are willing to put our own money into projects in the Borough, this can only reinforce the desired objective, which I am sure we all share, that the Borough of Scarborough is open for business and looking for new opportunities.

So, I voted to support the proposal after a lot of heart searching and discussion. But it should be born in mind that we as councillors were voting on the financial aspect of the proposal, not the planning aspect. So there will be many opportunities in future to ensure it delivers what is promised.

As I have intimated, this is an honest account of the way I went about making the decision I did to support the proposal to redeveloped the old Argos building. I stand by that decision for the reasons outlined above. The few people who have approached me to discuss my decision to support the project have been happy with my reasoning and, I feel, respect that decision. I must point out though that I will not be getting into a debate on social media about any aspect of my decision or the process I went through. However, I will happily discuss the decision with anyone face-to-face or on the telephone. My telephone number is on the SBC website.