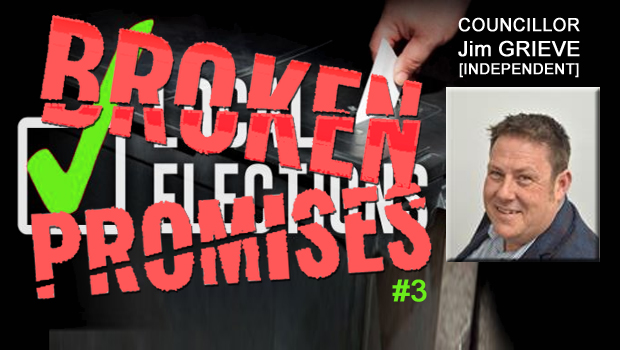 Third on the list is Cllr Jim Grieve who represents Weaponness & Ramshill ward.

On the Friday 12th July 2019 Cllr Grieve attended a full council meeting and voted in favour of spending £22million of Borough taxpayer’s money to demolish the old Argos building and redevelop the site. The redevelopment would see accommodation built for 195 people with a small number of retail units.

Information provided by SBC to councillors and the public estimated the new building would be worth £7.5million on the open market, some £14.5million less than the borrowing Cllr Grieve signed the Borough taxpayer up for.

The £22million of additional debt Cllr Grieve signed the ratepayers of Scarborough Borough Council up will see an extra £300 debt added per registered elector giving a total debt per head of £650.

Let’s take a look at Cllr Grieve’s May 2019 election promises.

Despite Cllr Grieve mentioning poor investments made by the council on behalf of the local taxpayer twice on his leaflet, he signed the Borough taxpayer up for riskiest council investment we’ve yet seen.

Why is it all investments made on behalf of the Borough taxpayer make a loss or at best have a worse return than the meanest current account? The Local Government training manual seems to have an odd view of what an investment actually is. If the project was nearly cost neutral to the Borough taxpayer then I doubt anyone would raise an eyebrow. Chucking £14.5million away on such a risky project seems folly.

Cllr Grieve also stated he wanted to be a truly Independent councillor on his May 2019 election leaflet, but reneged on that promise and joined the Independent political grouping on the council during his first week.