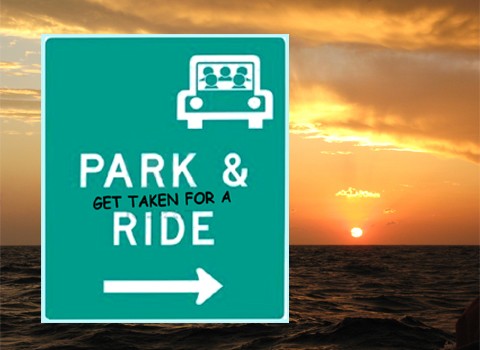 A Letter to the Editor from Richard INESON, offeringan objective analysis of the “Park-&-[get taken for a]-Ride” proposals.

I wonder if the people of Whitby really understand the full implications for them, of the long and eagerly awaited Park-Ride (P&R) scheme?

The proposed cost of this scheme has risen steadily over the years, without as much as a blade of grass being cut, it started at £1.6 million, went to £2.0 million, then £2.4 million, then £2.8 million and is now suddenly inflated to £4 million.

A great deal of money  to provide 250 spaces on tarmac plus another 200 on grass – these latter spaces will probably be totally unusable after prolonged heavy rain, which is not unusual, in summer, in Whitby.

Does this figure seem to be financially viable i.e. is it value for money? £4 million pounds to provide, at best, 450 car parking spaces? Not in my view.

Then there is the £330,000 which has already been spent, the only tangible evidence of which, is the now world famous ‘Bollard which never Rises’ on St Anne’s Staithe.

Then there are the telephone lines connected to the ‘Bollard which never Rises’ which had run up a bill of around £1,200.00 when I last enquired, a few years ago – I wonder who it speaks to? I wonder what the telephone bill is now?

There will be no overnight parking on the park and ride car park, so the P&R scheme will only cater for day trippers.

The ENTIRE EAST SIDE OF WHITBY, less The Ropery, has been allocated 63 spaces – these are the spaces on lower Church Street, outside The Fleece, and these will be permit only spaces, so east side residents will have to pay for a chance to park their cars here, with no guaranteed space and very little chance of a space at all.

One entire Stakeholder Steering Group was selected by Cllr Kenyon – an Executive member of the Whitby and District Tourism Association, she also selected the Chairs of the other two groups, there were two members of the various tourist associations on each group, plus people from the Whitby Hospitality Association, in addition, other members, such as Cllr Carson were put down as representing WTC but they are also members of the W&DTA.

Incidentally, the membership of these groups was supposed to remain confidential. Why?

Some say that the tourism associations were over-represented on these groups, others simply call it a complete carve-up.

What this means is that the east side residents will be prevented from using all of the parking which they are able to use, at present, on the west side of Whitby, they will also be charged for a parking space which will not exist, on the east side.

The parking scheme under the P&R is exactly the same as the scheme, involving the consultation process which cost over £15,000 and which was rejected by the east side residents in 2006, remember? The one which had a picture on the front of the consultation document, of Church Street, which was captioned ‘parking on The Ropery’. Experts ?  Professionals ?  Not in my view.

The 110 members of the W&DTA who responded to the questionnaire sent to them by their association, said that they needed 700 spaces, these are the prime parking spaces on the west side.

These spaces will be as good as given to them and the members of the Hospitality Association, Captain Cook Tourism Association etc. for the use of their customers, which is surely why they are not complaining about the P&R car park closing at 7pm.

The failure to provide overnight parking is lunacy in itself, surely what Whitby needs is more overnight parking, we do not want to encourage even more day trippers; long-stay customers are what the hotels and B&B owners want, but of course,  they will get these, as they will have all of the overnight parking right outside their premises, once the east side residents have been cleared out.

Meanwhile, in the words of Nick West, ‘someone has got to pay for the park and ride’ this means us, the residents; not bad for some areas of Whitby which will be allocated fair amounts of parking spaces, but the east side residents are getting the rawest of raw deals under this scheme – 63 spaces for over 400 buildings, including the masses of holiday cottages, the shops, the B&B premises and the hotels, bear in mind also, that the owners of commercial premises will be able to apply for multiple car parking permits.

The East Side Steering Group, unlike the other two groups, did not have a resident’s  representative, the Chair of the east side steering group was Cllr Clegg a member of the Captain Cook Tourist Association and a shopkeeper.

After the Parking Management ‘public consultation’ and exhibition at the Coliseum in June, 2010, the comments received during the ‘consultation’ were suppose to be considered by the Coast and Moors Area Committee, this has never been done, and does not seem likely to go ahead now, another fine example of ‘public consultation’ window dressing, for which this area is famous.

In a ‘leaked’ email, Nick West, Area Manager for the NYCC Highways Department, said that ‘it was inappropriate for the associated Whitby and Sandsend parking proposals to be considered by the Coast and Moors Area Committee’. Why?

Shops, pubs, cafés, restaurants, fish-and-chip shops, etc, via the P&R car park which will provide them with perhaps, another, 500 -1000 customers per day, up to 6-7pm. when the P&R car park closes.

The hoteliers and B&B owners, who will get all of the 24-hour car parking spaces currently used by the residents of the east side.

Apart from funding the construction of the park and ride facilities, Whitby residents will also be responsible for the £270,000 which will be the annual cost to run the scheme, and then there is the ‘Hopper Service’ which is estimated to cost £90,000 per year, and there are other costs such as £280,000 which is to be spent on ‘travel awareness and promotional activities’ whatever they might be.

The streets will be even more congested by day-trippers, there will be an increased need for street cleaning, public toilet provision, and police supervision, all of which will have to be paid for by the residents (business rates go to the government). Noise, violence, delivery vehicles, congestion of the streets and general inconvenience will increase.

On this point Nick West said,

“It will be a massive change for Whitby, going from unregulated and free parking throughout the town to controlled parking zones”.

In other words, the residents of Whitby are going to pay to finance a project which will be detrimental to their interests.

I nearly forgot to mention that the Scarborough Park-&-Ride scheme over ran its budget by £4.6 million, we were told at the time that, “such cost increases are not uncommon in major highway schemes of this size”.

You have been warned.

Then there are the environmental issues, the carbon footprint, the air pollution, the green house gases, have these been taken into account?

Some say that this is a stitch up to end all stitch ups.

What do residents of Whitby, who might not have been aware of these facts, have to say?