If you have not followed my recent articles in the public interest, describing affairs surrounding Councillor Jane KENYON’s questionable activities both in San Francisco and here in North Yorkshire, please consider clicking on the links and digesting the background to today’s instalment.

They say that one should never explain the workings of a conjuring trick. Nevertheless, it is a well-established tradition that the Conjuror passes his tricks down to his own progeny. I will return to the Conjuror presently. But first, let me be a spoilsport and give away the mechanics of the ‘Pro-NonDec-Prop’ Three Card Trick.

Strictly hypothetically, then, a sequence of events could look something like this. Imagine, firstly, that:

The Conjuror ideally (and routinely without difficulty) has access to all of this INFORMATION – before it becomes public knowledge.

The Conjuror’s next step is to establish a Limited Company, with a plausible name, say, “Tango Timber Ltd” (TTL), with Registered Offices outside of the Local Authority boundary.

There now exist two distinct trading identities – “Tango Timber Ltd” (TTL), and “Tango Timber” sole-trader, or partnership (TTX) – the former established outside the boundary of the Local authority and the latter operating from Site A, within the Local Authority boundary. The important point to note here is that, because of the similarity of names, the casual impression is that they are one and the same legal entity. They are not. They are entirely separate legal entities, though managed by the same people who are able to pass business between them seamlessly.

Equipped with all the ‘insider’ INFORMATION about the Project ahead of the competition, TTL is well placed to scoop the Tender and win the contract. Of course, the Procurement vetting process should reveal that one or more of the TTL Company Directors is, in fact, an elected member of the Local Authority – definitely ‘in the know’. Indeed, how could the Officers fail to recognise the presence on the Board of Directors of Councillors of the Local Authority for whom they work? This is where the INFLUENCE element really comes into its own. Certain stones remain unturned . . .

So the specially-established TTL buys in timber stock from various suppliers, delivered to premises not connected to TTL – in fact, to Site A, the premises of TTX – and from there, the materials are delivered to the Local Authority ‘beauty spots’, and in due course the Authority pays TTL (though any cheques made out too casually – to TT (unspecified) may be easily cleared through the bank account of either TTL or TTX). Deal almost done.

But then comes the finesse.

TTL takes out a mortgage to purchase Site A – the TTX premises – from TTX, and, of course, TTX duly receives the full sum borrowed by TTL from the mortgage company.

TTL then goes into voluntary liquidation before the creditors (the the mortgage-provider and the original suppliers of the goods, etc) have been paid, leaving debts in the order of, say, just as an example, quarter of a million pounds.

Nothing to be done about that – after all, that is why they are called Limited Companies! The Directors get out for a pound apiece.

And the mortgage-provider cannot repossess the land, because it is now belatedly discovered to be unregistered, and therefore no Title resides at the Land Registry! Finesse! TTX, having already been paid for the land, is sitting pretty, because it still owns the unregistered land. The mortgage-provider joins the other creditors in hoping against hope for a tuppence-in-the-pound-style pay-out when TTL is eventually wound up and dissolved – sometimes years later. Job done.

And, of course there will always be Local Authorities who develop Projects with PROCUREMENT requirements. TTX’s storage/delivery premises at Site A – unconnected to any yet-to-be-established Limited Company – are still to hand.

Please note – to be absolutely clear – that that scenario was, of course, entirely hypothetical. Pure fiction.

Now, back to reality:

I cannot conceivably relate chapter and verse within the confines of this article. So I have decided to start, if not from the beginning, then from the first public awareness of this kind of systematic corruption in local government here in the North East of England.

Are you sitting comfortably?

Readers of my own generation will no doubt recall the national scandal now know as ‘The Poulson Affair’.

Briefly, John Poulson was an architect/developer who, beginning in the early sixties, seduced many top Council executives into embracing his ambitious plans to re-develop city-centres throughout the North East.

Many of the ensuing ‘deals’, informed by inside INFORMATION, involved so-called ‘negotiated contracts’ – as opposed to contracts joined through the legitimate PROCUREMENT processes that bind all authorities – and were secured through the network of INFLUENCE. The Three card Trick.

Poulson’s operation began to take off at Newcastle-upon-Tyne, where his first ‘inside man’ was Newcastle City Council Leader, T Dan SMITH (Lab).

This is old potatoes. Follow the links, if you wish. The story first commends itself to our attention in the mid-sixties, when John Poulson expanded his operations to include Yorkshire – specifically, POULSON formed a close relationship with the Clerk of the Peace and Clerk of the County Council of the West Riding of Yorkshire (the then equivalent of today’s position of Chief Executive Officer of the County Council) Sir Bernard KENYON. The top man.

Sir Bernard KENYON had held the post of Clerk at CCWRY since the end of World War II. He certainly knew the ropes. His influence was manifold and compelling.

Sir Bernard joined the board of POULSON’s company, Open Systems Building Ltd, in April 1966, and quickly assumed the position of Chairman of the Board of Directors.

Yet Sir Bernard did not declare his interest in that company until October 1968, when that information was exposed in the Yorkshire Post (12/10/68 edition). After prolonged and desperate in-fighting, Sir Bernard was finally forced to resign from the Council on 15th January 1969. There ensued a long and complex investigation.

The whole network was unravelled, and following a lengthy £1.23M trial (nearly £11 million in today’s money), in which the identity of the prosecution’s star witness – ‘Miss X’ – was (inexplicably) concealed from the public, the evidence of ‘Miss X’ nailed John POULSON, and he was duly convicted of fraud and jailed for seven years.

Little has yet surfaced about what the future held for ‘Miss X’.

But let me turn (at last) to the Whitby Regatta.

I have been asked to draw readers’ attention some of the clauses in the Certificate of Incorporation and Articles of Association of Company Number 769384 – Whitby Regatta Limited (Experian credit rating: “BELOW AVERAGE”).

4.1 The first point of note is that nowhere in the Company Objects is there any mention of Whitby Regatta.

4.2 is left blank. This suggests to me that a bog-standard clause alluding to finances, such as appears on most template Articles of Association documents, has been wittingly omitted.

4.3 effectively gives carte blanche to the Whitby Regatta Limited to engage in all manner of business activities, with all the benefits of the goodwill and good name of Whitby’s 172-year-old community initiative – having paid nothing for it. Ms Kenyon appears to have been a prime mover in creating a viable business identity out of a voluntarily-managed, highly successful local tradition that, I am sure, has no interest whatever in expanding its remit to include commercial ventures in everything from “marinas moorings slipways causeways” to a “cafe restaurant and hotel and motel proprietors refreshment caterers and contractors and things of all kinds”, on a commercial business basis no longer primarily directed at serving the interests of the people of Whitby.

Moving on to Clause 6 – NO DISTRIBUTION TO MEMBERS:

NO DISTRIBUTION TO MEMBERS

Again, sub-clause 6.1 is innocuous enough. All the money must be directed towards the Objects, none to the Members. Highly commendable. But . . .

6.2 sets out what amounts to a list of exceptions to the foregoing – conferring considerable latitude on the Board and its powers of disbursement – in particular, to Directors.

To summarise: In plain language, Whitby Regatta Limited can engage, without constraint, in a wide range of commercial business activities and disburse funds in a wide variety of ways – all according to the prerogative of the Board of Directors!

This is a very far cry from the old Whitby Regatta Committee’s traditional and historical rôle of voluntarily organising the town’s rowing races and maritime fête, and distributing such profits as may arise charitably amongst a selection of local good causes.

And judging by the Invoices that have been passed to me (see pic) Whitby Regatta Limited is now using ‘Whitby Regatta’ as its trading name, although the former is a Limited Company, trading for profitable purposes, and the latter is (purportedly) a charity. This means that, to all intents and purposes, a commercial Limited Company is representing itself as a local ‘charity’. 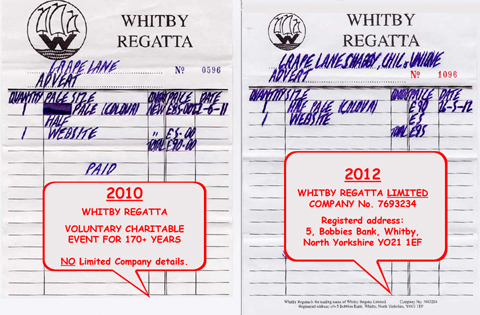 As the then-President of the Whitby Regatta Committee Jane KENYON reminded us (in the Whitby Gazette of 19th August 2010);

A year earlier Ms KENYON, was quoted in the Whitby Gazette of 9th September 2009:

The NYPA website lists KENYON as ‘Chairman of Whitby Regatta’.

Her NYCC Register of Interests (7th June 2012), in the section marked ‘CHARITABLE BODIES’, lists her as ‘President’ of ‘Whitby Regatta’. The section marked ‘YOUR SELF-EMPLOYMENT OR OWN BUSINESS’, however, has been left blank . . .

Her SBC Register of Interest (30th September 2009), states ‘none’ in every category.

Her SBC Register of Interests of 5th May 2011, as viewed (by appointment) by a member of the public (13th April 2012), states that Councillor KENYON declared an interest in “Whitby Regatta (Director and President – application for Charitable Trust)”.

Asked if that meant Whitby Regatta is a Limited Company, SBC Legal Officer Gill WILKINSON said, “No. It is a Charitable Trust”.

Asked if Councillor Kenyon held an interest in any Limited Companies, Gill WILKINSON replied, “If she did it would be on the form”.

Gill WILKINSON specifically stated, twice, that she was certain that the Register was complete.

Gill WILKINSON then went on to state that failure to declare an interest within 28 days of it arising is a criminal offence. NYCC Head of Legal Carole DUNN states otherwise. My information is that it is indeed a criminal offence.

Confronted by these discrepancies in a complaint to the Standards Committee, SBC provided the following Decision Notice:

This is sheer nonsense.

If  there exists a Register entry declaring KENYON’s interest in Whitby Regatta Limited, then it must have been withheld by Gill WILKINSON when the member of the public viewed the Register on 13th April 2012. Certainly, it was not made available to view.

So there we stand. Councillor KENYON would appear to have wittingly concealed her Directorship in Whitby Regatta Limited, and nothing provided by Gill WILKINSON has sufficed to evade that conclusion.

At this moment, Whitby Regatta Limited is a very cleverly constructed legal entity, adaptable to all manner of business ventures totally unconnected to the Regatta, and permitted to pay expenses, fees and/or salaries to the Directors. And Jane KENYON is very much at the helm.

Any Conjuror would be proud.

Most Whitby folk generally contribute donations to the Whitby Regatta collection-pots. (Last year, the proceeds of the collection amounted to £1,633.35).

They may think twice before doing so again.

In my view, the public record alone provides grounds aplenty to instigate a diligent investigation of Ms KENYON’s affairs. Given that NYP, NYPA, IPCC, NYCC, NYMNPA, SBC and the Conservative Party have ALL thus far declined to comment, one wonders why we are waiting . . .

I close with a question for SBC Leader Councillor Tom FOX: