Readers will be delighted with the news, confirmed today, that the application for Village Green status for east Whitby’s “Donkey Field” (also known as “Jacky Field”) has been successful.

This ensures that the “Donkey Field” (already a Scheduled Ancient Monument) is now protected against any possible future development and will remain forever the common land of the people of Whitby.

The application was made by then-Councillor Tom BROWN. Tom has since resigned from Whitby Town (Parish) Council in frustration with its inability to progress even the most trivial initiatives.

Also instrumental in the success of the application were former Town Councillor Ken GRAHAM and local transparency and anti-corruption campaigner Nigel WARD, who publicised the application and garnered the necessary documents and statements of public support.

On receiving the news today, Tom BROWN had this to say:

“I wish to express my thanks to NYCC Common Land & Village Green Officer Chris Stanford, whose helpful assistance stands as a shining example to other Council Officers. If only there were even a dozen like him!”

“I am delighted that this application has met with success. It would be highly appropriate if the Council were to erect a plaque in recognition of Tom’s immortal service to the community of east Whitby. Sad to see, though, that men as honest and able as Tom Brown and Ken Graham have been lost to the Council in recent weeks.”

The pictures were kindly provided by Yorkshire Water – whose contractor Peter Duffy Ltd made the ‘monumental’ error of bull-dozing a 20m wide strip on the east side of the “Donkey Field” without the appropriate permissions, damaging a medieval road and the foundations of 19th century jet workshops in the process. 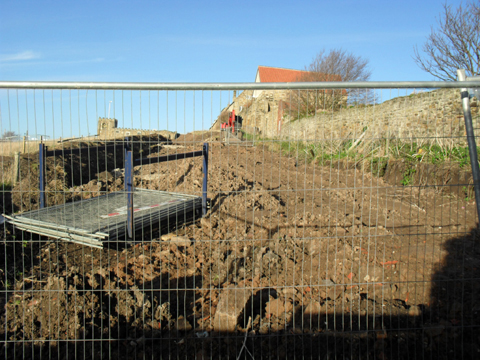 Subsequently, English Heritage arranged for an archaeological survey, details of the results of which are outlined on the plaque at the northeast corner of the Donkey Field, adjacent to the side gate to St Mary’s Church.

Hopefully, Tom BROWN’s success will serve as encouragement to the Helredale Village Green application that has been proceeding less smoothly.