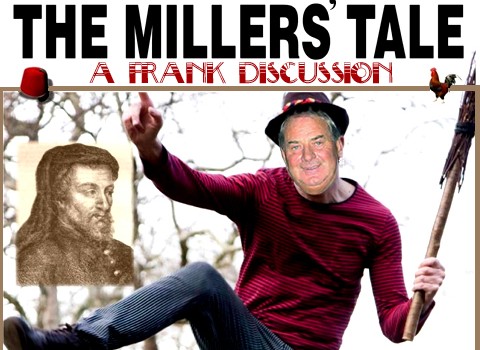 Recent articles outlining the long list of discrepancies in the Public Record (insofar as it concerns itself with the conduct of Councillor Jane Kenyon) have thus far touched only lightly on her life-partner Councillor Thomas William (‘Bill’) Miller.

I remind readers of one particular incident, reported in one of my ‘In My View’ articles entitled “Jane Kenyon and the Forged Signature – Who Done It?” – the incident of the Companies House 288a Appointments Form, appointing Jane Margaret Kenyon to the position of Company Secretary in Dales Timber Ltd (DTL), on which Miss Kenyon claimed that the signature ascribed to her was not, in fact, made by her – it was, therefore, a forgery. That 288a Appointments form is countersigned, within an inch or so of the allegedly forged ‘Jane M. Kenyon’ signature, by none other than Councillor Thomas William (‘Bill’) Miller. 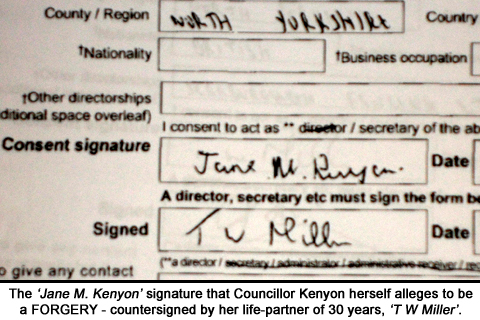 “The public record shows that Councillor Jane Margaret Kenyon’s alleged ‘unawareness’ rests on claims that her signature on the Company Secretaryship documents provided to Companies House “did not closely resemble other examples of” Councillor Jane Margaret Kenyon’s signature.That implies that the signature on the document was inscribed by another – a counterfeiter, or forger.

Would you please explain to me what steps you have taken, given your knowledge of Councillor Jane Margaret Kenyon’s claim to be ‘unaware’ that she was registered as Company Secretary of Dales Timber Limited, to inform the police that there was prima facie evidence of forgery?

I draw your attention to the terms of the Proceeds of Crime Act 2002.”

How is it, I wonder, that Carole Dunn has offered me no acknowledgement or response on this very serious matter – fraud and forgery, remember – though almost two months have now elapsed?

Regular readers of the Real Whitby ‘In My View’ column will readily connect the foregoing with “The Clergyman’s Widow Recalls . . .”, the personal verbatim testimony of an eighty-year-old lady reported in the article entitled “Jane Kenyon & Bill Miller”, in which it was stated (and I have high-lighted the relevant passages in bold type):

I have since enjoyed two lengthy conversations with the Whitby Town (Parish) Councillor who was an eye-witness to the events described by the clergyman’s widow, and that Councillor has confirmed to me an unequivocal willingness to testify in a court of law to the veracity of the clergyman’s widow’s testimony. Yet no charges have ever been brought . . .

And then I am reminded of a letter of complaint to Scarborough Borough Council by Mrs Pamela Miller – the long-estranged wife of Councillor Thomas William (‘Bill’) Miller (whose life-partner, as is well known, is none other than Councillor Jane Margaret Kenyon, Chair of the North Yorkshire Police Authority), in which the following line commends itself to our particular attention:

“It is only a matter of time before the police are involved and Mr Miller is arrested for forgery and fraud.”

But Scarborough Borough Council decided to take no action in respect of Mrs Pamela Miller’s complaint, though she is a first-hand eye-witness to the matters that she raised.

On 12th July 2012, at 9:53am, former NYCC, SBC and WTC Councillor Rob Broadley posted a comment in the FaceBook section of the Real Whitby ‘In My View’ article entitled “Jane Kenyon Story in Private Eye”. This is what he wrote:

Yet again I ask,

In another of the ‘In My View’ articles – “Open Letter to Nicholas Long – Independent Police Commissioner”, – I made public the following information:

IPC Commissioner Nicholas Long has neither acknowledged, nor responded to, my ‘Open Letter’.

Some of the high-ranking Officers of the North Yorkshire Police are said to be immeasurably displeased with Real Whitby. If such is the case, I would suggest that they may be guilty of ‘shooting the messenger’. The real cause of the dramatic collapse of public confidence in the NYP (and for that matter, the NYPA – whose members have no mandate to influence operational police activities) is not the factual reportage of disgraceful conduct by Real Whitby, Private Eye and the BBC, but rather that deplorable conduct itself.

The NYP should be far more concerned by Lord Maginnis of Drumglass’s public reference to the NYP in the following form of words:

So the message to Acting Chief Constable Tim Madgwick has to be that, unless he is merely marking time waiting for the 15th November 2012 election of the new Police & Crime Commissioner (and the dissolution of the NYPA on 22nd November 2012), whereupon a new Chief Constable will be duly appointed, and hoping against hope that the redolence of impropriety surrounding the Chair of the North Yorkshire Police Authority Councillor Jane Kenyon (and others) can be ‘contained’ until then – and since he has been unable, thus far, to set his own house in order – he should prepare for the intervention, long overdue, by a Chief Police Officer of high standing and sound principle from another force.