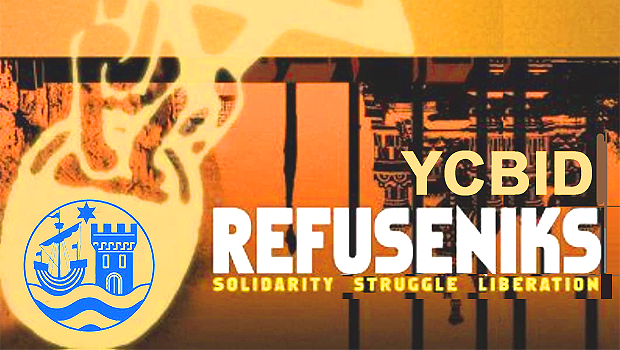 Of particular interest is Q13 and its associated Response:

Q13. Has Scarborough Borough Council paid the Levy for Year 4, if so when was it paid?

SBC has joined the ‘refuseniks’!

This Response, read in conjunction with recent (but long-delayed) publication of the minutes of the YCBID Board of Directors meeting held on 15th June 2022 (NB: the 19th July minutes – or those of more recent Board meetings (if any) – have yet to be published), it becomes clear that all was not well between SBC and the BID company – even before the damning VOTE of NO CONFIDENCE passed virtually unanimously by SBC at the meeting of Full Council on 28th July 2022, as Item 4 of the minutes Local Authority Collections records:

This, remember, was back on 15th June 2022, fifteen weeks ago – and seven weeks before SBC BID delegate Mr Richard BRADLEY’s resignation (enforced by CEO Mike GREENE, now departed) from the YCBID Board.

In the light of the SBC and ERYC having respectively passed motions on the theme of ‘No Confidence in YCBID’, many observers have wondered whether or not other local authority delegates – Councillor Jane EVISON [Con.] (ERYC), Mr Karl BATTERSBY (NYCC) and Mr Michael GRAHAM (NYMNPA) – would consider their positions on the YCBID Board of Directors still tenable.

Mr Michael GRAHAM (NYMNPA) is in a particularly unenviable position. The Park owns no hereditaments in the BID area and is not a Levy-payer, has no legal obligation to participate in the BID and must be acutely embarrassed to be associated with a private limited company that has attracted so much hostility and derision.

According to one County Councillor, NYCC CEO Richard FLINTON has referred the decision on Mr BATTERSBY’s continued participation to Coastal Portfolio Holder Councillor Derek BASTIMAN [Con.]. One may imagine that when NYCC become NYC (and SBC ceases to exist), NYC may wish to retain ‘an ear’ in YCBID’s Boardroom. I am tempted to say, another futile Trojan Horse!

At ERYC, Councillor Jane EVISON [Con.] is reported to have sought legal advice regarding her seat on the YCBID Board. For the moment, she is still in place.

I have written to ERYC CEO Ms Caroline LACEY seeking clarification regarding ERYC’s present position in regard to its own Levy payments: 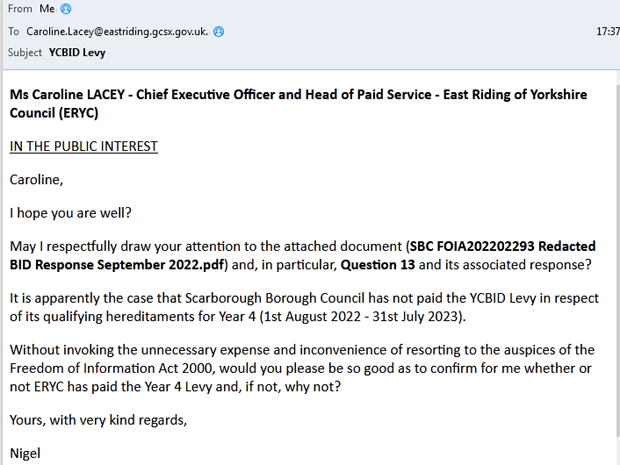 I look forward to an open and transparent response.

I also look forward to the 3rd October meeting of ERYC’s Standards Committee Assessment Sub-Committee, where my Formal Complaint against ERYC Councillor Geraldine MATHIESON [Ind.] will be considered. Councillor MATHIESON is the member who publicly likened electors to ‘children’, in front of whom ‘grown-up things’ should not be discussed. Quite how the Committee will conjure up an exoneration for such blatantly disrespectful remarks remains to be seen. Autoproctology does not come into it. (See my article “Suffer The Little Children” for the full story).

Meanwhile, YCBID’s published minutes for its 2022 meetings may be reviewed here: