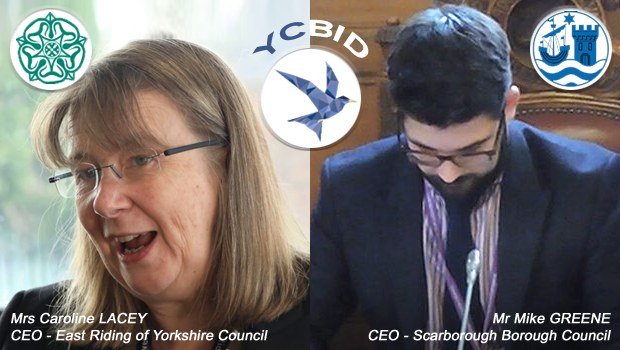 An Open Letter to the Chief Executives of SBC and ERYC, by NIGEL WARD, calling for openness and transparency and accurate information as we in the Borough of Scarborough approach a Vote of No Confidence in Yorkshire Coast BID Ltd.

It is with no small degree of regret that I find myself constrained to addressing you both in the public domain.

As you will be aware, ERYC’s outgoing Director of Legal & Democratic Services, Mr Mathew BUCKLEY, has, after a number of cordial emails between he and myself, foolishly determined to cease to engage with me, on the grounds that (i) I am not a resident of the East Riding, (ii) I am not a Levy-payer, nor (iii) am I the appointed legal representative of a Levy-payer – this despite his emails to me of 23rd and 24th May 2022, in which he thanks me for a large quantity of professional opinion which I have placed at your Councils’ disposal, and despite the fact that I acted as McKenzie Friend to an East Yorkshire resident and Levy-payer at Beverley Magistrates’ Court.

It is, perhaps, a truism that members of the legal and financial professions, of real quality, are best sought at Park Square, Leeds, or in and around Alfred Gelder Street in Hull, on the grounds that it is those who cannot cut the mustard in the commercial world – the real world – who tend to gravitate to the public sector.

Be that as it may, I am now in a position to offer you and your masters – your elected members – a Briefing Note, readily understood by the lay reader (I include Councillors), prepared by a highly respected Leeds firm of the highest calibre at the behest of a leading Scarborough businessman, with whose full consent I now reproduce the following, with gratitude to a helpful Councillor and for the benefit of both Councils, in the hope that the present fiasco errupting out of your Councils’ involvement with Yorkshire Coast Business Improvement District Ltd can be reigned in before the repute and good standing of the Councils’ descends any further in the public perception. (see Yorkshire Post articles at the foot of this page).

You will find this Briefing Note somewhat more comprehensive – and comprehensible – than the advice provided by your respective s.151 Officers/Finance Directors, Mr Julian NEILSON (ERYC) and Mr Nick EDWARDS (SBC), the aforementioned Monitoring Officers/Directors of Legal, Mr BUCKLEY (ERYC) and Mrs Lisa DIXON (SBC). In fact, you will find that it corresponds very closely with my own lay opinion, as published in the North Yorks Enquirer:

This is a brief note to explain how the BID is supposed to operate and the VAT implications. It then considers what appears to have gone wrong with the Yorkshire Coast BID. This note does not consider the establishment of a BID, just the operation of it once in existence.

How it is supposed to work

1. The Council (SBC and ERYC) is the “Billing Authority”. As such the Council issues Levy invoices to the businesses and has a legal right collect the Levy. VAT is not allowed to be charged on the Levy. It is in effect a tax similar to National Non Domestic Business Rates. Note that the Council is not an ‘Agent for the BID Company’.

a. The costs of collection;
b. Refunds of Levy overcharged;
c. The costs of delivering the BID objectives/proposals (i.e. those things that are to Improve the Business in the BID Area).

b. From the Council’s point of view, the VAT charged by the BID Company can be reclaimed from HMRC in the normal way Council’s recover VAT. There is, therefore, no detriment to the Council, other than the administration.

What has happened with the Yorkshire Coast BID Limited?

1. SBC and ERYC appear to have acted as ‘Agent’ for YCBID. There are several factors in coming to this conclusion:

a. The Levy invoices state that SBC is the Collecting Agent for YCBID.

b. SBC Head of Legal Services has confirmed in writing that SBC is Agent for YCBID.

c. We have been told, in an FOI from SBC, that the invoices raised by YCBID to SBC show a narrative of “Levy Collections for Month”, or similar.

d. The Published Accounts for YCBID disclose that its turnover is “… the fair value of levy charges raised on businesses within the BID area…”. This indicates that YCBID believes it is receiving the Levy – not providing a service to SBC and YCBID.

e. We have also seen the detailed accounts for YCBID, which disclose in its Cost of Sales the Levy Collection Costs. We have seen this also in the Lincolnshire Coastal BID Accounts. The costs of collection are not an expense of the BID Company. Look at 5 above. As the Council thinks it is an “Agent”, it charges the BID Company a fee for collecting the Levy. This is what an Agent does.

f. We know SBC is not deducting the BID Levy collection costs from the BID Revenue Account as this has been disclosed in an FOI.

g. We believe ERYC is acting in the same way, otherwise YCBID would identify that each Council was operating in a different manner.

h. As both parties to this arrangement (each respective Council and YCBID) have acted in a manner that is consistent with the Council being an Agent they have, by their deliberate and continued conduct, demonstrated an agreed variation to the Operating Agreement. That is, that the Council (SBC and ERYC) is acting as an Agent for YCBID.

2. It is a clear principle that if the Council collects the Levy as Agent for YCBID, then the Levy is automatically belonging to YCBID. This means that YCBID does not provide a service to the Council and is not therefore eligible to be VAT-registered.

3. If YCBID is VAT-registered in error, then the invoices it has issued to SBC and ERYC, charging VAT, have been raised in error and are invalid. SBC and ERYC have reclaimed this VAT from HMRC. If it shouldn’t have been charged, then it will have to be repaid to HMRC. Of course, will SBC and ERYC be able to recover this from YCBID?

How should this be rectified?

1. The Council and YCBID have to admit they have administered this incorrectly.

2. YCBID has to correct the invoices it has raised to SBC and ERYC for the correct amounts (i.e. the Levy collected less the collection costs) and the correct narrative (i.e. “administering the BID arrangements”);

3. SBC and ERYC have to cancel the VAT Invoices raised to YCBID for the collection costs.

If the above is not done, the alternative is to maintain the present position, but contact HMRC to confirm that YCBID should not be VAT-registered. This will then have the consequence that SBC and ERYC will have to repay the VAT claimed and seek its recovery from YCBID. It is unlikely that this option would be adopted because of the very substantial amounts that would be required to be repaid to HMRC.

I have asked whether or not your elected members have been made aware of the variation to the respective Operating Agreement(s). Members of both Councils have indicated that no information on this point has been provided. It is noteworthy that ERYC Councillor Jane EVISON [Con.] has described this quest for clarity as “helpful”.

If it is the case that a variation of the Operating Agreement has been entered into by Officers without the democratic involvement of elected members, then it is my contention that a “procedural impropriety” has taken place, and on these grounds, I now instruct you to acknowledge my Formal Corporate Complaints against each of your respective Councils, for the record.

Now that a date has been set (28th July 2022) for an Extraordinary Meeting of Scarborough Borough Council to consider a motion of No Confidence in Yorkshire Coast BID, I call upon both of you to instruct your Officers to seek Adjournments of the respective hearings, in Beverley and York, scheduled for 7th July 2022, until such time as a precise narrative of the respective Councils’ actions has been established and set before members, in order that they are fully able to fulfil their democratic responsibilities.

And finally, on a note of what I hope you will perceive as eminently reasonable, please consider this:

Our businesses – and the staff and families who depend upon them – deserve a FAIR Vote of No Confidence – taken by their elected representatives in FULL knowledge of the facts. 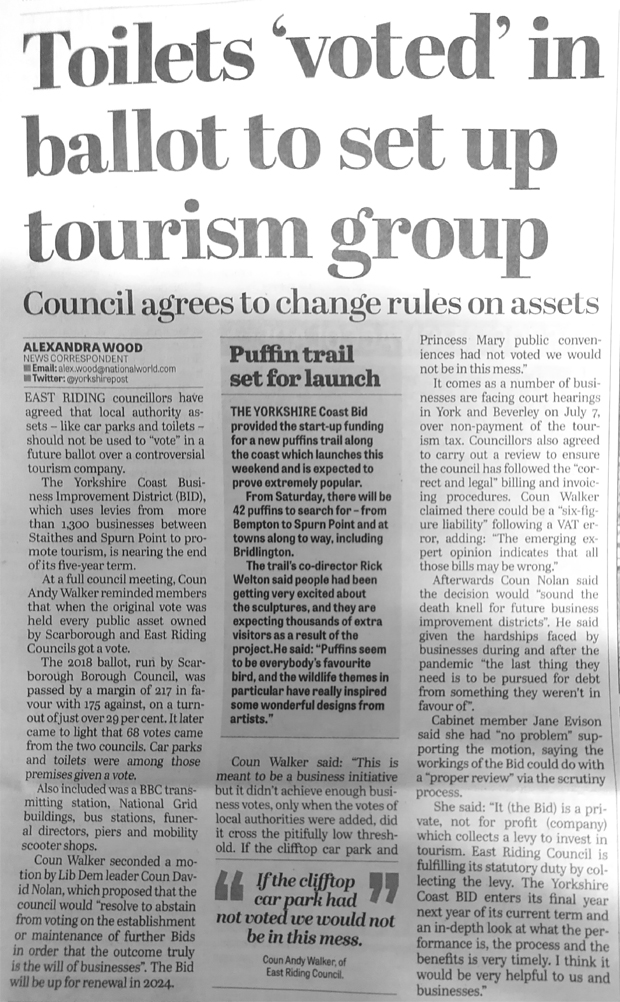 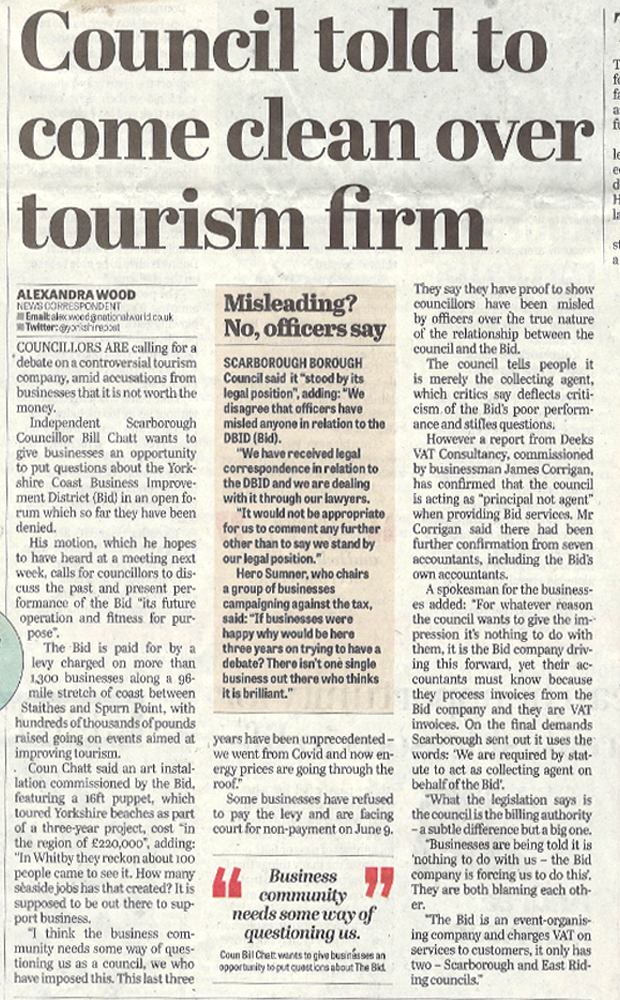