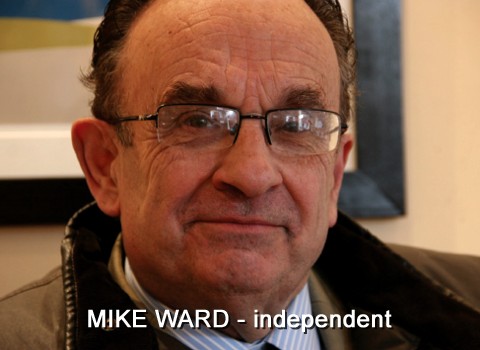 “But then there was one…”

SBC is past it’s sell-by date and, given what it is doing or NOT doing, should be abolished and replaced by one Unitary Authority.

The electorate in various parts of the Borough should be given a vote on whether they want to be part of NYCC or East Yorkshire or Teesside, depending on where they live.

This idea is currently being considered in many parts of the country with District/Borough Councils being amalgamated with larger unitary authorities as a cost-cutting efficiency exercise.

It would allow more monies to be spent on essential services.

Many hundreds of thousands of pounds, if not millions, could be saved by simply removing a number of senior posts.

We have 7 District/Borough Councils in North Yorkshire, so even with seven less Chief Executives it is easily seen where cost savings could be made.

The money saved  would then pay for extra staff to ensure an improvement in essential services – more for less.

It really is a NO-BRAINER.

That process will, however, take time and meanwhile we are left with the frightening prospect of elections in May 2019 and having Scarborough Borough Council, with it’s Conservative majority, making decisions which effect us all without listening and, most certainly, without full, open and transparent explanations, for another four years.

If they won’t listen, then they cannot understand the concerns and dissatisfaction of the many – even those who would consider themselves Conservatives!

“The Whitby Piers are to be repaired, starting in October 2018″

How many times have we heard that – this month, next month, this year, next year – over the last 10 years?!

SBC have known the serious condition of the Piers for years, but apart from repairing one major void, little else has been done.

Will work on the Piers actually start next month? Hopefully so.

Was the promise of a bridge to the East Pier extension to be included in any future repair just that – an empty promise which SBC have shown, along with many other promises they have made, can be broken. Hopefully not.

Would anyone be surprised to hear in the coming weeks that unfortunately, with the ‘unforeseen’ winter months approaching, work has had to be postponed until next year even after a possible token show of workmen on site for a few days waiting for the weather to deteriorate?

Just how many photo-shoots have there been in our local paper welcoming the fact the Piers are about to be repaired?

Photos of a local Conservative Councillor welcoming the fact that funding has been found by their efforts and work will commence shortly!

You can just picture the front page of an April edition of the Whitby Gazette already: 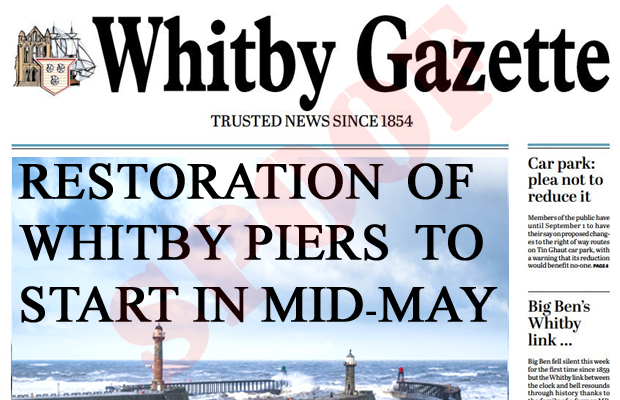 Congratulation and thanks, especially to our local

for saving our Piers.

But hang about – aren’t the Scarborough Borough Council elections to be held that month?

It would be ‘news’, so would not be covered by any election/purdah embargo on ‘electioneering’!

The only surprise to date is that SBC have not found a way of blaming Opposition Councillors or local forces outside the Council for all the delays incurred.

Once the status quo has been maintained in May 2019, then is there is a chance that due to ‘unforeseen circumstances’ in the availability of funding etc, etc, etc, work is again postponed until next month, next year and so on and so forth, until we have a major catastrophe on our hands.

SBC make hundreds of thousands of pounds, if not millions, from businesses, residents, and tourists in the north of the Borough, but where does that money go? What do we see locally for the monies raised?

How much has SBC invested in our area apart from via grant money?

The answer is: very little.

They do tend our public spaces and clean our streets, though even then there is a lack of resources and the necessary manpower, given the numbers living in and visiting the area.

They no longer pay for Public Conveniences, leaving that to our Parish Councils.

This means the residents in those areas pay twice for the same service – once to SBC in Community Charge and then again in a Parish Precept.

How can that be fair ?

So where is our money going ?

Much is used for supporting the Conservative Council’s vanity projects in Scarborough.

The Futurist has been demolished and the cliff behind will be stabilised with the cost born by – us!

Yes, Scarborough Town may get another tourist attraction. But how much subsidy will be involved, now and going forward?

Even many Scarborough residents have objected to this latest development, but to no avail?

The Open Air Theatre is another attraction for Scarborough, but does this really provide good value for money for the northern residents who are also contributing to the financial losses on that venture?

The Water Park has been provided by using public monies, but who benefits?

Who will benefit if the Company running the attraction pulls out of the current agreement, leaving SBC to subsidise another failing attraction?

How many of our residents could even afford to visit these attractions very often, if at all?

Planning Decisions are taken by SBC, but can it be honestly said that those decisions have been taken in the best interests of the majority of residents?

Do we have enough low-cost housing options – for rental or purchase – to meet local need?

Would our local Conservative Councillors like to say what they think they have directly contributed to the local economy by their efforts if all the benefits of grant funding is excluded?

Have our local Conservative Councillors really listened to residents?

Do we even need party politics at a local level?

Our Councillors are there to serve and reflect the views, opinions and  concerns of their residents – NOT of a political party.

At national level – and maybe even at County level – party politics may have something to contribute, but within Borough and Parish Councils surely not.

No Councillor should have to answer to a Party whip and the community would be best served by having no involvement with national politics.

Residents – NOT Party – should come first!

We need honest, open, transparent, hardworking local people, willing to give of their time to represent the area and hold the Officers, our public servants, to account.

Some Councillors do work extremely hard for their residents, but how many can honestly say they speak as they find all the time and in the best interests of all?

Under the current SBC Cabinet structure, with few Committees where members could be informed, learn and challenge, what chance is there for anyone serving as an ‘Opposition’ Councillor?

The Party whip means Conservative Councillors risk the perks of their posts, deselection or being excluded if they dare speak out against the small inner circle who follow the wishes of those directing Council business from their ivory towers.

If you view the webcast of the full Council Meetings it is surprising to see just how few of the Conservative Councillors actually speak in the Council Chamber.

They can, however, raise their hands when so called upon by the Leader.

Can they honestly say they agree with every motion proposed?

Don’t they ever believe their residents would like an issue raised or an action questioned?

Don’t they know when our Chief Executive says, at every Council Meeting, that “no correspondence has been received” that this might not have been be the case?

Don’t they ever believe a decision needs to be challenged, an action justified or a simple explanation given?

Everyone sometimes makes a mistake and it’s never wrong to admit it – and then apologise.

No Officer or Councillor is immune to a mistake or two, but how often has anyone on SBC apologised for anything?

In recent times, we have seen many Councils across the country apologise for errors of judgement or mistakes.

It sometimes takes courage to do this and respect is due to those who do.

We have had apologies from the Chief Executive of North Yorkshire and the Leader of that Council, but from those at SBC – nothing.

Have no mistakes ever been made by SBC?

Remember the slogans ‘We never close’ or ‘We are never late’?

Maybe now is time for SBC to adopt the slogan:

‘WE ARE NEVER WRONG – OFFICERS AND CABINET FIRST’

They could even use our monies to pay for their T-shirts!

All too often, mistakes are hidden behind the Constitution of the Council or the rule of Law without proper explanations.

Financial errors of judgement are even more serious, with residents left to pick up the pieces in higher charges, etc.

Why aren’t ALL, not just a few, Councillors prepared to challenge the decisions made?

Unless ALL Councillors speak out on our behalf, then any change – and a glimmer of hope for the residents – will never be seen.

POSITIVE ACTION IS NEEDED NOW and over the coming months.

DO WE REALLY WANT MORE OF THE SAME?

DO WE REALLY WANT TO SEE OUR AREA STARVED OF INVESTMENT?

THE TIME FOR CHANGE IS NOW!