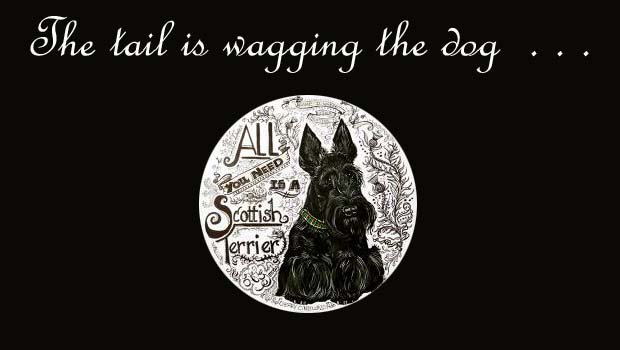 Before reproducing that email, readers deserve an insight into my purpose in making a fundamental and, in fact, straight-forward enquiry.

Since mid-November, as I am sure regular readers are certainly aware, several Enquirer contributors have addressed the matter of the interception and censoring of emails from (we are told) certain members of the public to Councillors and ranking Council Officers.

Opposition Councillors – notably, Councillor Tony RANDERSON [Lab.] and Councillor Janet JEFFERSON [Ind.] – have expressed their anger and disbelief that their Officers have been standing between them and the people they represent.

Curiously, Conservative Councillors have been conspicuously silent on the subject, with the exception of the Leader (in his “Queen’s Speech”, which I have deconstructed elsewhere) and Councillor John NOCK [Con.], whose response to Councillor RANDERSON bore all the hallmarks of having been drafted or dictated by some obliging soul in the Legal & Democratic Services department. It concludes with the tired old mantra, “The overarching reason for the current practice is to Protect Officers and Members from unreasonable stress, abuse and inappropriate conduct”. I will not trouble to repeat the many reasons why this is nonsense.

That the current practice may be undemocratic, unreasonable and unjustifiable – as well as illegal – has clearly not entered Councillor NOCK’s purview. Such things pass over his head, obscured by the Tory diktat of solidarity within the Conservative group.

The Leader returned to the topic in his Christmas Address, reiterating the party line, which bears repetition here (along with my deconstruction):

DB: “The council has recently been criticised by some of its own councillors for the way in which emails from unreasonable complainants are handled. Again this is disappointing when those councillors approved the policy in relation to this to protect our staff and elected members. Our policy on this process is clear. Such behaviour is dealt with by a simple, overt, and reasonable practice, which is in operation throughout the public sector for the protection of not only staff and councillors, but also to protect limited resources and ensure the council’s ability to correspond with its customers and deliver its services is not hindered. We will continue to take all reasonable steps, as laid out in the policy, to comply with our legal and moral responsibility to look after our staff and members.”

NW: What a pile of unmitigated drivel. Neither Councillors nor members of staff require “protection” from a few thousand black pixels on a white computer screen. Sticks and stones may break your bones but pixels never hurt you. I have reported elsewhere that not one of the many copy-emails I hold sent in by people who have been ‘deemed’ by ‘the Council’ (by whom, exactly?) to be ‘vexatious’ or to be an ‘unreasonably persistent complainant’ has ever used foul language or uttered an insult – much less a hollow threat. Despite Derek’s protestations (or, rather, Jim DILLON’s – because Derek has no idea of his own what the law [the law – not internal Council policy] has to say on the interception of emails), every reasonable adult knows that spying by the ‘authorities’ on private communications is indicative of a STASI or KGB mentality – defensive, authoritarian, fearful and, frankly, vulgar. Unacceptable at every level. And, not coincidentally, the same sequence of adjectives one might accurately apply to the ‘directing mind’ behind this breach of human rights.

The salient commonalities between the NOCK and BASTIMAN versions (both evincing a linguistic competence beyond the respective capacities of their purported authors) are reiterations of Mr KITSON’s earlier response to Councillor RANDERSON, which itself was a reiteration of Mrs DIXON’s decree, which was itself the reiteration of a decree set in stone by the Chief Executive, Mr Jim DILLON, who remains unbending in his determination to censor the communications of concerned citizens to elected members – and it is not difficult to imagine the kind of information that he is so desperately anxious to head off at the pass.

With all this in mind, we now approach the key question which I set before Mr KITSON back in mid-December ’17.

I hope readers will use the best of their judgement in determining whether or not my email could reasonably be considered likely to occasion “unreasonable stress, abuse and inappropriate conduct”.

My question is framed in formal but neutral (not hostile) language, transparently setting out its purpose and demanding negligible officer time such as might be considered to place unreasonable demands on the Council’s resources. It is specific in its scope, seeking only a definitive statement as to whose, ultimately, is “the directing mind and will” of Scarborough Borough Council – for it is increasingly the view of increasingly many Councillors (and increasingly numerous members of the public) that we are collectively in the dark on this point.

Is the tail wagging the dog?

In the light of recent events, I address you for the purpose of obtaining an unequivocal answer to a simple ‘either/or’ question, albeit one with ramifications.

In correspondence with members of the public and elected members, it is your wont to refer to ‘the Council’ in such terms as, for example, “the Council has determined…” or “the Council will (or will not) such-and-such…”.

I would like you to clarify exactly to whom you refer when you use the term ‘the Council’.

Specifically, do you intend:

(b) Scarborough Borough Council, the body electorate, comprising the fifty Councillors mandated by the electorate by means of democratic local elections.

If (b), please confirm the existence, providing a copy, of any authorisation provided to you personally by the fifty Councillors, the body electorate, to make statements or take actions on their behalf, autonomously and without further instruction.

It is important that the electorate (and, indeed, the wider public) should be aware of lines of authority within ‘the Council’.

It is important that the public should have a clear grasp of the relationship between, on the one hand, their democratically elected representatives and, on the other hand, Officers of Paid Service and staff – the ‘help’.

It is important that the public should be aware of this fundamental distinction because any crisis of confidence in individual elected members is susceptible to remedy four-yearly at the polling station (if at no other time or place), whereas any crisis in confidence in Paid Service would appear to be susceptible to no remedy of any kind, ever.

This state of affairs seems to conform to the meaning and intention of the common parlance expression “the tail is wagging the dog”.

If such is the case, it is clearly a matter of the most conspicuous public interest for one and all to be clear about that.

I rely on you, therefore, to respond promptly and truthfully – and, please, concisely – to this email, on your own initiative. Nuremburg V will not obtain. It is not a trick question.

[Note: The so-called “Nurembourg V” defence is “I was only following orders” attempted by Nazi war criminals.]

In my view, this is a legitimate – in fact, crucial – public interest question, couched in appropriate language; clear, courteous and eminently reasonable. The question is emphatically NOT “vexatious”.

Any Councillors or members of the public who believe otherwise should examine their mirrors in search of lobotomy scars.

“The directing mind and will” is legal terminology for what we would call, in common language, “where the buck stops”. (More about this here, particularly p.5, in the section entitled ‘The identification principle’).

Scarborough Borough Council, though a creature of statute, is a body corporate, a corporation – a company, with Directors and a Chief Executive – Mr Jim DILLON.

The concept of “accountability” becomes meaningless if no practical and reliable mechanism exists to hold corporate culprits to account.

Thus, identifying “the directing mind and will” of Scarborough Borough Council should offer food for thought for those who have a compelling case, perhaps an actionable case, demonstrating that they have been wronged by the Council (in fact, by the “directing mind and will” of the Council) – coincidentally (if you believe in coincidence), some of the same individuals who have been blocked from contacting their elected representatives by the Council’s outrageous ‘Big Brother’ policy are members of the poublic with legitimate claims. This concept of ultimate responsibility, then, extends far beyond the interception of Councillors’ emails.

Because there is something very wrong about the fact that the Council can fritter away a quarter of a million pounds defending the indefensible in, for example, a case like the Ben MARRIOTT case (and I will be reporting on others presently) – and, by the way, inevitably losing – only for the perpetrators (who were not Councillors) of the inexcusable treatment of Mr MARRIOTT to escape even the most trivial sanction  – while the public, as ever, foots the bill.

So one way or another, Mr KITSON should recognise that we the public deserve an answer: Is the tail wagging the dog?

Because his silence is barking volumes.

My conception of democracy (perhaps naïve) is that we the public elect our Councillors, placing our trust in them, always in the belief that they supposedly stand accountable to us for their actions and/or omissions and that they, in turn, hold the Directors of the body corporate to account.

But, as we have recently seen (again, more on this soon), Councillors, due to the total inefficacy of the Code of Conduct and the Standards regime, can be held to account only at the ballot box – up to four years in the future – and Directors can apparently never be held to account at all.

If the tail really is wagging the dog, then the time has come to dock that wee Scottie. 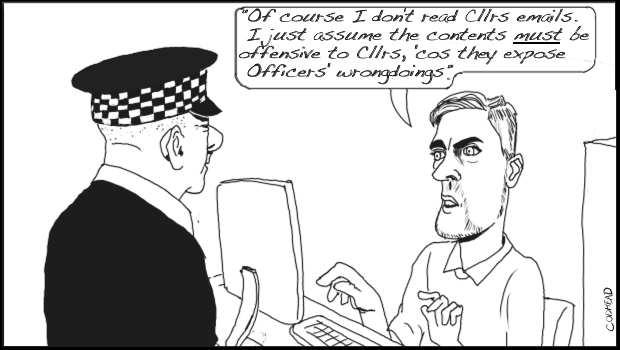