The inner workings of the Town Hall in Scarborough often appear turgid and dull to the casual observer. However, careful scrutiny over a period of time is sometimes rewarded by the gradual emergence of hitherto unsuspected links.

Take, for example, the tip-off I received via FaceBook back in September 2010, reporting on a range if wrongdoings, including the alleged existence of a Class-A substance-abuse culture amongst management personnel at Scarborough Borough Council (SBC):

. . . and this from someone identifying himself as a former SBC employee – a claim that proved easy to verify, since the writer and I share mutual Friends on FaceBook. 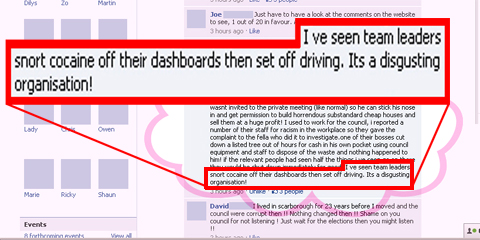 Ten days later, I received a response from the then Head of Legal & Support Serrvices Ian Anderson, who told me: “As I believe you will appreciate this information is inadequate to be treated as a whistleblowing allegation”.

Stone-walled – but no denial. So I immediately responded by sending an FOIA request for, amongst other information, the full gamut of internal SBC documentation relating to drug-abuse within SBC, including any reports passed to the North Yorkshire Police. My FOIA was formally acknowledged the following day – and that (wouldn’t you know it?) is the last official word that I have ever succeeded in extracting from SBC on the subject of cocaine-usage by Council personnel. Once again, stone-walled – and still no denial.

I did message SBC and NYCC Councillor Bill CHATT (who featured prominently in a recent Tim HICKS article on Real Whitby), asking if he could shed any light on the subject, and attaching a ‘screen-shot’ of the above FaceBook posting. He could not. But on 30th November 2010, he did send me a message that I could only interpret as a ‘warning off’. So I asked him for clarification and he came back, the following day, with this (SPG properties retained):

For a Council that professes to take such a pride in its ‘openness and transparency’, SBC certainly does seem to have its share of dark secrets. But let me leave that ‘thread’ dangling for a moment; we will pick it up in due course . . .

I clearly remember (ten years ago) a well-lubricated dinner guest of mine (a long-serving Scarborough Borough Councillor) telling us that the Police turned a blind eye to many goings-on in Whitby. She spoke of fellow Councillors and senior Council and Police Officers engaging in ‘spin-the-bottle’ parties at Sandsend, and of naked ‘rituals’ at the old alum excavations behind the cliffs near Kettleness – and at some standing-stones on the moors – throughout the ‘seventies, ‘eighties and ‘nineties, by which time the intoxicant of choice had graduated from alcohol and/or marijuana to cocaine and/or amphetamines, and the preferred activities had taken on a more sinister character. She clammed up when encouraged to elaborate. At the time, I dismissed all that as chit-chat, straight out of the bottle. Now, I am not quite so sure . . .

In March 2010, an acquaintance of mine in Scarborough found a hand-delivered unaddressed envelope in his post-box. The envelope contained a photocopy of a letter purportedly sent to Diane Clarke, the Field Director of the Yorkshire Conservatives. The letter (scan reproduced below, in redacted form) refers, by name, to a prominent North Yorkshire career politician, alleging the use of sexual impropriety “to secure influential positions”.

My acquaintance scanned it and passed the original to the Scarborough News, from whence it has never re-emerged. The Scarborough News and the Whitby Gazette, be it remembered, do not practice investigative journalism, avoid all controversy and print only Council press releases on issues as ‘sensitive’ as this: 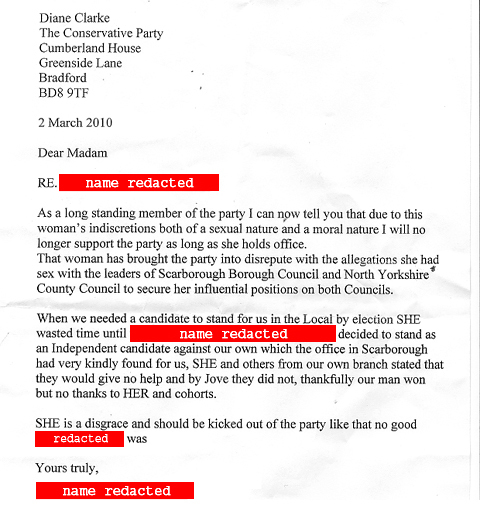 Shortly afterwards, a man in his fifties came into my acquaintance’s shop, asking if there would be any interest in photos of a ‘satanic ritual’ taking place at some standing-stones up on the moors, involving high-profile local dignitaries and officials, for publication on the web. My acquaintance, of course, expressed an interest, with the caveat that digital images would be more convenient. The stranger suggested that it could probably be arranged and that he would return in a few days. He never did.

Further to the allegations regarding the Savile connection to the ‘chamber’ in Whitby, with its sado-masochistic bondage and ritualistic paraphernalia  reported in last Monday’s article (to which I am now hearing the name of a very senior local political figure and former MP being included), I have now interviewed a newspaper photographer who confirms that, back in the ‘eighties, he and a fellow journalist (on receipt of a tip-off from a member of the clergy in the Pickering area, to the effect that certain high-profile people would be performing a ‘naked satanic ritual’) staked out a site on the edge of the moors, to the north-west of Scarborough.

Equipped with camera and infra-red film, they scooped pictures of the said ‘naked satanic ritual’ and presented an explosive illustrated story to their editor at the local paper, who, having at first waxed highly enthusiastic, quickly performed a volte face and ‘buried’ it – because (they were told) of the ‘political sensitivity’ of some of the participants . . . 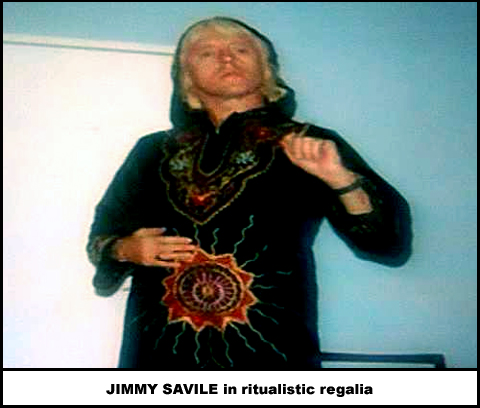 Given the now widespread allegations against Jimmy Savile of sexual abuse, rape, beatings and necrophilia, his basement ‘dungeon’ in Leeds, the ‘chamber’ in Whitby (with it’s whipping-post), the allegations of sex-and-drugs sessions and the al fresco ‘satanic rituals’ on the edge of the moors – to say nothing of the on-going investigations by six Police Forces over a period of fifty years, it is extremely difficult to believe that North Yorkshire Police in the Scarborough/Whitby area could conceivably have been “unaware” (how often we hear that) of the existence and activities of the Savile set – ‘The Club’ – and its central position in much of the foregoing. Or its high-profile membership.

That the Savile set – ‘The Club’ – was widely believed to be central to these depravities is clear – yet we are expected to believe that the Authorities knew nothing of all this.

As I stated in my third attempt to elicit a comment from SBC Leader Councillor Tom FOX, a few days ago:

The suspicion that Savile was far-sighted enough to implicate, and thereby incriminate (through the implied – or applied – threat of blackmail), influential holders of public office in his activities has been raised at the BBC, in Leeds, in Manchester, at Broadmoor, at Stoke Mandeville Hospital, at Glencoe, at Haut de la Garenne, and (perhaps most shockingly) at Bryn Estyn, near Wrexham in North Wales – where, according to some blogs, young people died in the course of these horrific abuses.

Noteworthy is the fact that Savile-biographer Dan Davies has reported that Savile is also alleged (by fellow DJ Tony Calder) to have routinely kept Chief Police Officers on-side, to ‘cover his back’ – ie  protect himself from arrest.

It is for Operation Yewtree and the anticipated Public Inquiry to determine the truth (or otherwise) of the huge roster of allegations against Savile. But the preponderance of probability is persuasive enough for most objective observers; Savile almost certainly did bring his perversion with him to Whitby and Scarborough – where, according to today’s papers, “victims have told detectives Savile masterminded a gang of pervs from his luxury flat” – a luxury flat, by the way, that Scarborough & Whitby’s Robert GOODWILL MP (Con.) was reportedly ‘stunned’ to learn had yet to be searched by the North Yorkshire Police.

That “gang of pervs”, needless to say, was known locally as ‘The Club’, and there is little doubt that it included amongst its members his worship the Mayor of Scarborough Councillor Peter Jaconelli, as well as other prominent and influential local ‘dignitaries’.

Meanwhile, we are expected to believe that SBC Leader Councillor Tom FOX, having completed his long career with the North Yorkshire Police (concluding as Acting Chief Inspector – the man in charge), knew nothing of all this and actively supported the bestowal of lavish civic honours upon Savile – he was “unaware” – another manifestation of the culture of concealment at SBC.

So who now, in the Local Authorities, will evince the courage and integrity to come forward in public and say, “Yes. The rumours were rife. I knew there was a risk of something terrible happening, and I was wrong to remain silent for so long”.

One might have hoped that that person would be SBC Leader Councillor Tom FOX, whose positions of privilege within both the North Yorkshire Police and Scarborough Borough Council, over a total of four decades, identify him as exceptionally well-placed to make such a statement.

So I ask him the question for the fourth time:

“Would the Leader confirm or deny that, as a former ranking Police Officer in Scarborough, and as long-serving leading Councillor since that time, he was aware that elements within the Authorities were cognisant of concerns of the gravest nature in respect of the activities of Sir Jimmy Savile, yet nevertheless played a leading rôle in the lavish civic honours bestowed upon a man now widely reviled as the worst and most degenerate sexual predator in the Borough’s history?”

I think we should be told. It is commendable that, at Councillor Tom FOX’s own urgent behest, SBC has now removed Savile‘s name from its “Roll of Honorary Freemen of the Borough”.

What remains to be answered is how it ever came to be there in the first place.

And I leave you with another alarming thought:

If such monstrous crimes as these could remain hidden, how much ‘transparency’ can we expect about more prosaic matters – planning consents, allowances, procurement and the like?