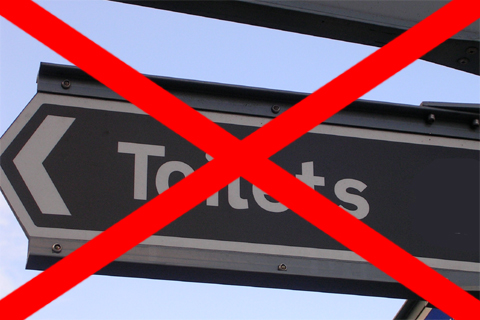 A Letter to the Editor from Richard YOUNG of Whitby, who writes to express his concerns regarding proposed closure of public conveniences at many locations in the Esk Valley.

Many members of the public may not be aware but Scarborough Borough Council is proposing to close or otherwise dispense with its responsibility for approximately 50% of the public toilets throughout the borough. This will almost certainly mean that many if not most of these will be closed. A report to the Environment and Economy Scrutiny Committee held on 24 March 2014 sets out details.

The majority, 13 out of 16 that have been identified for disposal or closure, are in the Northern Area of the borough and most of these are in the national park. These facilities serve motorists, hikers, cyclists, tourists and other visitors for whom there will no satisfactory alternative. These people are a growing and essential part of the rural economy.

The Northern Area toilets proposed for closure are:-

The result of these closures will be that there will very few public toilets in the northern part of the North York Moors.

The toilets in these areas and villages are needed by the many people who spend time in outdoor pursuits in the National Park, well away from the principal towns and so inevitably require toilet facilities in villages. Furthermore, many walkers and hikers are mature citizens who naturally require toilets frequently.

The estimated annual saving that will be achievable by Scarborough Borough Council from these closures is reported to be £81,130.

It has recently been reported that tourism in the national park is worth half a billion pounds per year with 10,000 jobs supported and 6.7 million tourists visiting the area each year.

If these figures are anywhere close to being accurate, quite apart from the obvious loss of amenity, the risk to health, potential nuisance and great discomfort that closing public toilets will cause, it is surely a monumentally stupid idea in economic terms to reduce the level of essential amenity available to the huge number of tourists that visit the area.

Analysis of the situation reveals a clear case of confusion and lack of joined-up thinking within Scarborough Borough council. Closing public toilets in tourist areas is directly contrary to the councils own Tourism Strategy as published on the council’s web site.

The strategy stresses the importance of attracting visitors to the villages and rural areas of the borough, with particular reference to the importance of the National Park, the actions proposed, however, seem to be blind to the needs of rural tourism.   The tourism strategy identifies attracting people to the coastline, interesting and unspoilt countryside, villages and exploring locations by car as being particularly important yet the actions now proposed seem to completely ignore the needs that this aim creates.

It is understood that that SBC is under severe financial pressure but the provision of the most basic of public services should be given the highest priority. Quite apart from the potential adverse impact of their proposal, the Council is proposing to cut out a large part of what is one of the most important and basic services that any good local authority should provide, a service that is an absolute necessity for the convenience and good health of residents and visitors to the borough.

The lack of clear thought about the wider and the more obvious implications of this proposal raises a serious question about the decision making ability of those at the council who are associated with this idea. If members do not view providing for these basic needs as an essential service, just what do they believe essential services to be?

Anyone who feels they can support my views is invited to sign an online petition at the following address: