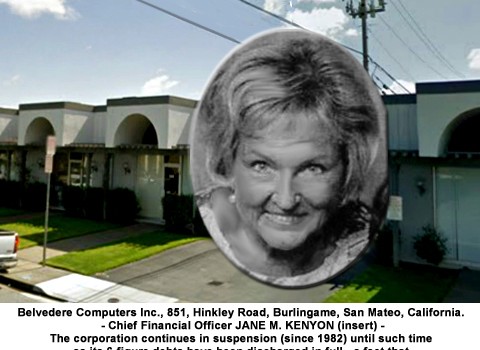 A Letter to the Editor from David CLARK of Middlesbrough, who writes to inform readers of further backgound relating to Belvedere Computers Inc. (BCI), of California – the SUSPENDED Corporation adminstered by Councillor Jane KENYON-MILLER (Chief Financial Officer and Agent for Service of BCI) and her husband Councillor William ‘Bill’ MILLER (Chief Executive Officer of BCI).

The Corporation is SUSPENDED, by order of the Franchise tax Board, Sacramento, Ca, USA.

As of the 20th day of June, 2014, the Corporation remains SUSPENDED.

The Corporation owes thousands of dollars in unpaid Tax.

The Tax debt increases by at the least $800 per year.

Previous to this episode, the Corporation was sued in a US Court on a charge of UNLAWFUL DETAINER (non-payment of rent. The case was founf FOR Christensen Properties Inc. The debt was settled by the removal of property of equal value from the Brelvedere Computers Inc. premises.

The two Priniples of the Corporation were thought not to be present, having fled back to Blighty.