Today’s news, as reported on the Guardian website under the Helen PIDD by-line, that Sheffield Star reporter Alex EVANS has been threatened with arrest under anti-terrorism laws and intimidated into erasing his footage of an event of exceptional public interest, will inevitably remind readers of events at Seamer & Crossgates Parish Council on Tuesday 20th November 2013.

The very idea that on that occasion Parish Councillors believed that it was appropriate for them to call members of the public “anarchists” and to call out the North Yorkshire Police to evict them from a public meeting – for no other reason than that they intended to embrace the urgings of Secretary of State for Communities and Local Government Eric PICKLES and film the proceedings for the public record – is so preposterous as to beggar belief. The BBC ‘Inside Out’ documentary, aired on 10th February 2014, exposed that outrage to getting on for a million viewers, yet nobody from Seamer & Crossgates Parish Council has ever apologised – much less resigned – though Councillor Harry SMITH no longer holds the Chair.

Such is the antiquated and authoritarian mind-set of the lowest tier of local government.

Just as a little knowledge is widely know to be a dangerous thing, a little (perceived) power can rapidly escalate, through hubris and arrogance, to a malignant authoritarianism that knows no constraints and  no accountability. Time and again we see them acting ‘ultra vires’ – beyond their powers.  (For a terrifying account of the ultimate development of this disregard for human rights and equality under the law, I strenuously recommend to readers Anna FUNDER’s remarkable book “Stasiland”, published in paperback by Granta Books [ISBN 1-86027-655-3]. (Having lived for a little while in East Berlin, in the period immediately following the collapse of the wall, I can vouch personally for the authenticity of Anna FUNDER’s account).

Having been refused admission by one Parish Council recently (who, sensibly, have since proffered humble and contrite aplogies – which were readily accepted), I have been scoping out possible cases for study – one of which I will be covering in some considerable detail in my next article.

But for the moment, I leave the reader to contemplate the inexorable and accelerating drift the ‘authorities’ in this country are exhibiting in their departure from the future of sparkling transparency mapped out for us by the Prime Minister in the aftermath of his 2010 rise to his present position:

“For too long, those in power made decisions behind closed doors, released information behind a veil of jargon and denied people the power to hold them to account. This coalition is driving a wrecking ball through that culture – and it’s called transparency”. [David Cameron – September, 2010]

Well, the Prime Minister’s wrecking ball was not visibly in evidence at the Freedom Ride, the pensioners’ long-running anti-cuts-to-free-travel protest meeting, at Sheffield Station yesterday. Instead, the British public has been treated to a scene not so very far removed from Cold War Berlin.

Those who engage with their soaps and their football matches should better heed the warnings of those of us who engage with our local authorities.  We know what Anna FUNDER was writing about. 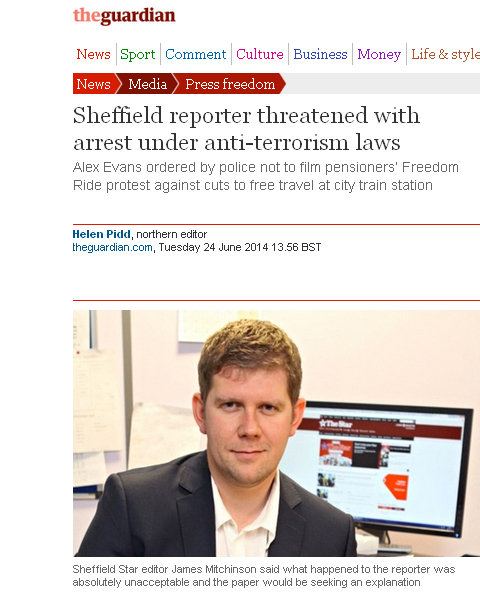