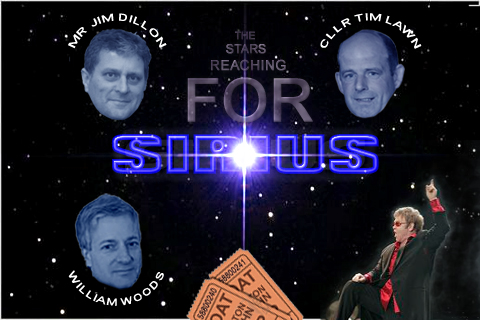 As regular readers will know, Registers of Interests are always intriguing reading, but the full facts are obscured as relevant information is often altered or omitted.

Given the willingness of Local Authorities to support York Potash’s dig on the North Yorks Moors, let us firstly have a dig into the information about the Chairman of the Planning Committee at North York Moors National Park Authority.

Further inspection of his historical Register of Interests reveals that the tickets were accepted for the Elton John Concert at the Open Air Theatre on the 5th June 2011 and they were gifted by ‘William Woods & Co Ltd, Bowforth House, Welburn, Kirbymoorside, YORK, YO62 6HJ’, but this comprehensive information was deliberately obscured.

A few cursory checks reveal that William Woods is a director of York Potash and is listed as the ‘Development Manager’. You can confirm Woods’ links to the above address here and here.

I wonder if the Elton John Concert tickets were the ones bought by Jim Dillon on his Council Credit Card? When asked if the tickets in question were bought for ‘people who were related by blood or marriage to employees, officers or Councillors of Scarborough Borough Council’ Jim Dillon’s response was that they were ‘sold to a member of the public’ and he was ‘unable to comment on their guests’.

Having established a relationship between a director of York Potash and the Chairman of the Planning Committee of North Yorks Moor National Park Authority, one wonders how far back that relationship extends?

All those parcels of land are in the Sneaton/Littlebeck area, which surrounds the proposed York Potash minehead site – rather fortuitous business decisions on the part of Councillor LAWN, since the closer your land is to the minehead, the quicker you’ll receive money from York Potash for Mineral Rights under your land.