In my view, in a society in which greed and self-interest number amongst the most compelling of motivations, it is prudent (if cynical) to ask some serious questions before signing up to any binding agreements. Perhaps the most fundamental question, with its primary implication, was best expressed (as so often) by the Romans:

The direct translation could not be simpler or more straightforward – “To whose benefit?”. The implication, though, is more subtle; namely, that he who seeks to make the deal (he who issues ‘an invitation to treat’, as the lawyers like to say) may have one or two cards up his sleeve.

My own background is in the music/media industry. I have seen – and signed – and written – many contracts in my life. The music/media industry is not a benevolent society. The two parties to the almost mythical and highly sought-after ‘record contract’ very often are motivated by starkly different hopes and aspirations; on the one hand, ‘profit’ (of course), and on the other, an indefinable compulsion to share the product of creativity with a wider public.

The first of these parties – the record company – has much experience in business and employs highly specialised lawyers to draw up its contracts in such a way as to disguise the extent to which the artiste (the talent that drives the industry) is induced to part with his rights in favour of the financial enrichment of the company. So what? That’s business. Hire a manager; hire a lawyer.

Coming from half a century of experience in this culture of cat eat mouse, I have been taking a keen interest in the various evolving versions of the Lease Agreement offered to local landowners by York Potash Ltd, passed to me amongst a considerable number of purportedly ‘leaked’ documents, many of which deal in geo-chemical details of a complexity far above my head.

Speaking of music, many readers will be familiar with an old adage (variously attributed to Miles Davis, Thelonius Monk and J.S.Bach):

Contracts are often like that. It is not so much the apparent subject matter of the contract that counts; the part that matters is in the spaces.

That bears repeating; “The part that matters is in the spaces”.

What I mean is real space – within the planet Earth.

One cubic metre of polyhalite ore is estimated to weigh on average 0.89 tonnes, so it is helpful to envisage the physical dimensions of the ‘void space’ of 14.6 million tonnes of polyhalite as a single cube of sixteen point four million cubic metres.

A cube measuring eight hundred and thirty-three feet on each side – ten times the height of Whitby’s West Pier Lighthouse. 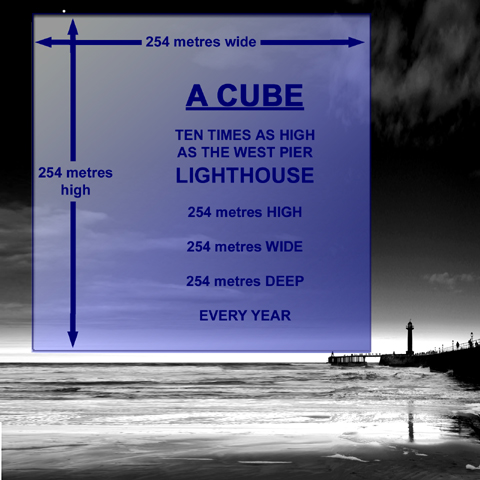 That is a lot of space. Every year. Year after year. Under the North Yorkshire Moors National Park.

What does Sirius plan to do with all that so-called ‘void space’? According to their scoping study document, released on Monday 30th April 2012:

“The only waste expected to be produced from the end to end process is a relatively small amount of salt from the ore. This will most likely be evaporated and made available for sale or disposed of as a clean brine”.

It does not look, at first glance, as though Sirius will have much use for an enormous volume of ‘void space’.

Let us consider now the Yorkshire Potash Lease (Final Version) prepared by Langley’s of Lincoln (apparently this was not business that could be ‘trickled down’ into our local economy).

Its eleven pages of definitions do not tell us what will become of the ‘void spaces’.

It does tell us that landowners (‘the Landlords’) are being offered by YPL (‘the Tenant’) first an option fee, then an annual amount plus a royalty proportionate to their area of land and dependent upon Gross Sales Receipts once production is on-stream. That is, of course, a coarse generalization – the details are not relevant to the point I am making, which is this:

How much does Sirius intend paying for the most valuable commodity under the North Yorkshire Moors National Park – the ‘void space’ that they plan to create?

The answer appears to be nothing. Not a bean. Diddly squat. SFA.

I have a copy of one of these YPL Lease documents, annotated by an acknowledged expert in mining and prospecting agreements. I quote from those annotations now:

“YOU MUST NOT ASSIGN YOUR RIGHT TO THE VOID SPACE AS IT HAS A VALUE TO THE TENANT FAR IN EXCESS OF THE VALUE OF THE MINERAL – INDEED IT COULD BE ARGUED THAT THE MINERAL PROCESSING IS A BY PRODUCT OF CREATING VOID SPACE FOR HIGH VALUE HAZARDOUS WASTE DISPOSAL”.

Our US/European consumer society is generating waste at a phenomenal rate – an accelerating rate. The so-called BRIC counties (Brazil, Russia, India and China) are accelerating even faster.

Wikipedia tells us that there are many types of waste defined by modern systems of waste management, notably including:

Waste disposal is big business – some say a dirty business.

I find myself turning again to the objectives of one of the most far-sighted pieces of legislation to have been enacted in my lifetime:

(2) The purposes for which the functions are exercisable are—

(a) the preservation and enhancement of natural beauty in England, both in the areas designated under this Act as National Parks or under the Countryside and Rights of Way Act 2000 as areas of outstanding natural beauty and elsewhere;

(b) encouraging the provision or improvement, for persons resorting to National Parks, of facilities for the enjoyment thereof and for the enjoyment of the opportunities for open-air recreation and the study of nature afforded thereby.

Can you see any mention of Household waste, Hazardous waste, Bio-medical waste or Nuclear waste in there?

I do not believe that I am alone in my concerns. Why else has Sirius stock lost over 22% of its value during the past trading week on the London Stock Exchange (from 22.5p down to 17.5p) at close-of-trading on Friday? Certainly not on account of the few hundred people who read my column.

Three of the top directors hold a quarter of a billion shares between them.

That is around two-hundred-and-fifty MILLION 5p pieces they just watched slide down the pan. Twelve-and-a-half million quid.

The latest piece of news in from my source is that we should expect a Planning Application to be lodged not in September, as has previously been mooted, but in a matter of weeks.

I shall leave you with that thought while I continue to study some labour/cost analyses and job-creation prognoses. Then I will offer an opinion.