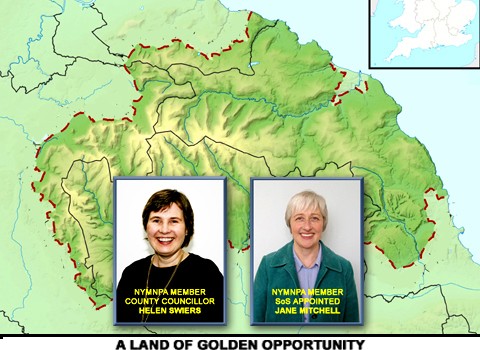 On Monday the 24th September 2012 at 10am there was a full National Park Authority meeting at The National Park Office, The Old Vicarage, Bondgate, Helmsley. Item 16 on the Agenda was a pre-application presentation to members of the Authority.

The purpose of the Agenda Item was:

“To set out and agree an additional [sic] to the Authority’s Code of Practice for pre-application presentations to Members in respect of the York Potash proposal in view of the size and complexity of the project”.

The second purpose of the Agenda Item was:

“To agree further pre-application opportunities for public involvement in the York Potash proposal”.

It was recommended that:

“Members approve the contents of this report”

“The Authority attends a further set off [sic] public meetings arranged by relevant Parish Councils or itself following the pre-application presentation on 28 September 2012″.

Attending the meeting, but not declaring an interest in the York Potash portion of the meeting, was Cllr Helen Swiers (of recent ‘Private Eye’ notoriety), one of the five North Yorkshire County Council appointed Members of the NYMNPA. Councillor Swiers has substantial land to the south of the National Park and stands to gain a large amount of money in mineral rights from York Potash, should the mine gain planning permission. One wonders why she didn’t declare an interest and leave the meeting at this point.

Also attending the meeting was Mrs Jane Mitchell, one of the five Secretary of State appointed members. Mrs Mitchell had no reported interests in York Potash / Sirius Minerals at that time.

However, six days after the pre-application presentation by York Potash to NYNMPA members, on the 28th September 2012, Mrs Mitchell registered an interest of £4,000 worth of Sirius Minerals shares.

She must have liked the York Potash proposal!