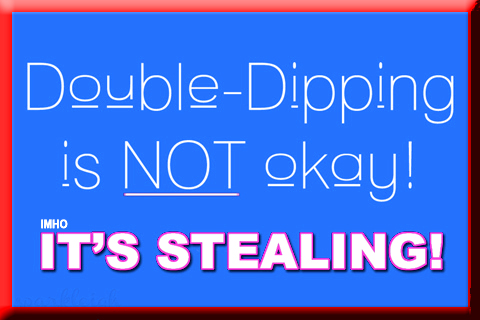 Regular readers have been asking me to explain just what it is about ‘double-dipping’ that is such a big deal.

Nothing could be simpler.

In a nutshell, Certain Councillors have accepted money, from two Councils – profiteering by banking up to THREE TIMES the actual cost that they have paid out for their Broadband connections.

Each year, they have been making a profit of around £500. It is as though they have bought a Broadband facility for £250 and ‘sold it on’ to Local Government for £750 – year after year.

Some of them have claimed this even though they were actually present at the Council Meeting when it was decided – in fact, some actually voted in favour of including the opportunity not to receive it.

The allegations did not suggest that Councillors had ‘claimed’ Broadband money.

The allegations were, and always has been, only that they “received” the excess payments.The allegation is that ten Councillors received multiple payments for Broadband from two (or even  three)  different Councils, over several years, and have declined to refund the excess, thereby corruptly making a profit at the expense of the taxpayer.

Two pairs of Councillors who were married to each other received multiple payments for Broadband each, when they were using the same Broadband connections for one household, because they were married couples.

Councillor Jane Kenyon is additionally accused of submitting fraudulent expense claims to the North Yorkshire Police Authority for telephone calls that had already been paid for by her Basic Allowance from NYCC.

In fact, these are not a matters of ‘allegation’ at all – they are matters of undeniable fact, entirely confirmed by the Public Record of both Councils (NYCC and SBC). There is no possibility of denial.

The Councillors concerned have not availed themselves of the opportunity that is built into the system, with their knowledge and approval, to pass up the payments – payments that have enabled them to make a profit of £500 per year, year after year. NYCC’s Head of Legal Carole Dunn has expressed the pre-determined view that Councillors have an ‘entitlement’ to indulge in profiteering from the public purse. Nor have they denied the allegations – they have denied allegations that have never been made!

None of the foregoing explains why SBC Leader Councillor Tom FOX stated ‘live’ on Radio York that the money that both he and his wife (former Councillor Ros FOX) received as Broadband Allowance was also for ink-cartridges, stationery, computer ancilliaries and telephone calls as well as Broadband. That is utterly untrue. Councillor Tom FOX has conceded that he and his wife shared, via a wireless router, one and the same Broadband connection, yet received money for two (ie one each). Further, other Councillors have confirmed that ink-cartridges and stationery are provided free to Councillors.

So this, too, was profiteering at the expense of the public purse.

Following publication last Thursday (20th September 2012) of Tim Hicks’ article “N Yorks Corruption Round-Up”, I was copied into an email from Tim Hicks, to the Councillors, in which he suggested that, rather than face charges under the Fraud Act 2006 (as has been suggested publicly by former WYP Detective Inspector Cedric Christie), Councillors may wish to consider the wisdom of paying back to the Councils any monies that constituted profiteering on their Broadband Allowances at the taxpayers expense.

Only one of the Councillors, as far as I know, has seen fit to reply to Tim Hick’s suggestion (email reproduced below).

But first, let me remind readers of the furore over the weekend concerning the arrogant and high-handed remarks doled out to a Police Officer on security duty at Downing Street last Friday by Cabinet Minister Andrew  MITCHELL. Shadow Home Secretary Yvette COOPER MP has accused the Prime Minister David CAMERON of presiding over a ‘cover-up’.

Chief Whip Andrew MITCHELL has come within a hairs’ breadth of losing his place in Government (and may yet do so) even though he denies (no-one seems to know if he really did) calling the Police Officer a “f**king pleb” and a “moron”, though the Police Officer’s contemporaneous notes of the exchange have since been published in the national press.

With all of that in mind, please look at the email response to Tim Hicks, and copied to every Scarborough Borough Councillor (including the Leader, Councillor Tom FOX), by one of the ‘double-dippers’ – a Borough & County Councillor of many years experience, and in fact hand-picked by Leader Councillor Tom FOX as a Cabinet Portfolio-Holder (Spelling, punctuation and grammar as per original):

I hate bully’s who pick, and pick. in my life in my circles people don’t make life difficult because they can,life is hard enough with out Internet trolls

The Cabinet Portfolio-Holder who wrote the above email is known to me personally. In my view, there are very few Councillors at Scarborough Borough Council who serve the electors of their Wards more diligently and effectively. That is commendable. And appreciated.

But this email is a disgrace in a number of ways.

The denial of ‘claiming’ is utterly disingenuous. The precise nature of the way in which payments have been made (and received) has been fully documented by both Councils and it is on the basis of that Public Record documentation – and that documentation alone – that a detailed explanation of the ‘double-dipping’ profiteering has been reported here on Real Whitby. The facts are not in question. Certain Councillors have received THREEFOLD what they actually paid out for their Broadband connections. Year after year. Fact.

Think about the services that this money could otherwise have provided . . .

I do not need to dwell upon the rudeness, personal invective and abuse of position – or the fact that such conduct is strictly prohibited by the Code of Conduct – other than to say it is indicative of the attitude of contempt towards normal financial probity (and to the electorate) maintained by the ‘double-dippers’:

Q: My local Council Member was brusque and unpleasant to me. Is that allowed?

A: Members’ behaviour can be a breach of the Members’ Code of Conduct if it if fails to treat others with respect, amounts to bullying, or brings the Council into disrepute.

That any Councillor – let alone a Cabinet Portfolio-Holder – when confronted by the clear, concise and clear explanation offered by Tim Hicks of the true circumstances surrounding the ‘double-dipping’, and his rational and courteous suggestion of an reasonable and honourable resolution to the affair –  should respond in such offensively abusive and intimidating terms, in writing, and having had overnight to consider not only his choice of words, but to whom he wished to communicate them, goes a long way beyond the rude remarks (whatever they actually were) made by Cabinet Minister Keith MITCHELL in the heat of the moment, at the end of an intense working day.

There was a time in this country when disgraceful conduct of this sort, once made public, did not advance to the point of open calls for ‘heads to roll’.

It was commonly accepted that even the ignorant and the semi-literate were capable of writing a contrite and sincere apology – and a coherent letter of resignation.

So why are we waiting?

As Enoch Powell so wisely said, “All political careers end in tears”.