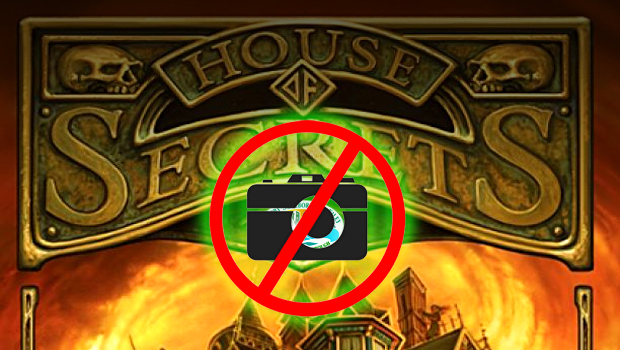 Further to our Guest Author article by ANDY STRANGEWAY, Enquirer police and crime correspondent TIM HICKS has requested publication of his email correspondence with SBC Leader Councillor Steve Siddons [Lab.] and North Yorkshire Police Chief Constable Lisa Winward on the subject of pubic and press freedoms – in the public interest.

The Enquirer is delighted to oblige.

Further to my e mail below to the Chief Constable, I am writing to raise my concerns that under your new “open and accountable” policy, you have now tried to ban photography in Scarborough Town Hall.

I believe that it is essential in a democratic system that the democratic process is open and accessible and this includes council meetings in my view. Having the meetings filmed independently by citizens and/or journalists denies the ruling party the option of editing footage or declining to show it and ensures the full proceedings will be shown.

I think my e mail below is self-explanatory on the legality of your new policy.

It saddens me that when you were elected I had hoped that this would usher in a new era of openness and transparency, following the repressive policies followed by the previous administration against citizen and community journalists. It appears to me that under your leadership, SBC has become even more autocratic, aggressive and unaccountable.

I write in regard to the article below in the NYE by Mr Andy Strangeway concerning video and still photography in Scarborough Town Hall.

I had no knowledge of this article until I read it. But it causes me concern that Scarborough Borough Council (SBC) have now asserted the position that they can ban still and/or video photography – either covert or overt – in Scarborough Town Hall during Council meetings when the public have been invited in.

You may remember this issue arose when police were called to arrest a man who was videoing a Seamer and Crossgates Parish Council meeting in 2013. When the photographer refused to either leave or stop filming, police were called to eject and/or arrest him. In the event, the response of your force was perfect. Your officers were scrupulously courteous, confirmed there was no criminal offence, the photography was lawful and that the police did not have powers to prohibit photography in a public place. They then left. Your force control room also demonstrated that it understood the law on photography. This incident was covered in the national press. 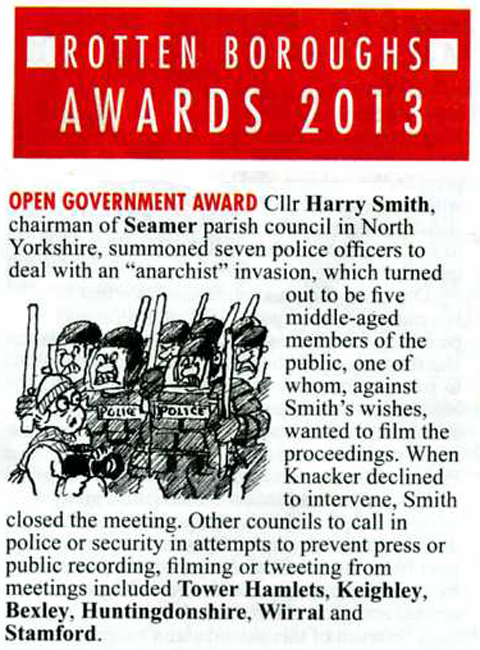 According to the article, SBC assert that any person that does not like being filmed should tell council staff. I am also concerned that this may be used as a pretext to justify ejecting or harassing a person that is performing photography within the town hall. If someone is offended by photography in the Council Chamber, they have the option to leave, or to cover their face, but not to prevent photography in the town hall or any public place. Nor is there any requirement for anyone to obtain permission from anyone to perform photography.

I fear that SBC’s policy is unlawful and will inevitably lead to a confrontation between Council staff and the photographer, which will either result in the police being called and/or Council staff using force on the photographer to either eject him, stop him from filming, to take his or her camera, or to delete his footage.

To forestall these eventualities I would like you to forward my e mail to the Superintendent at Scarborough and ask him to write to Councillor Siddons making it clear that the police have no power to prevent photography in these circumstances and cautioning him that should Council officers call the police, try to use force to prevent peaceful photography, seize cameras or delete footage, they risk arrest and prosecution for wasting police time, assault, harassment, theft and/or causing criminal damage. This course of conduct could also include a citizen’s arrest by the photographer and a civil prosecution.

From a wider perspective, the issue of photography and the police has been difficult, but is now more settled. Historically the police have abused their positions by arresting photographers, seizing their cameras and/or making them delete their film, although they have no powers to do so. The classic example of this was an incident when a photographer was arrested under the prevention of terrorism act for photographing the Houses of parliament from the other side of the River Thames. This attracted widespread criticism of the Metropolitan Police.

I will forward this e mail to Councillor Siddons and Mrs Dixon, so that if there is an incident of unlawful force being used against a photographer by SBC Councillors or employees, it can be used in evidence to demonstrate that SBC officers were explicitly aware that their actions were not lawful.

On a happier note, this video gives police guidance on the law and photographers.

The Metropolitan Police guidance on police powers and photography are here.

I will ask the NYE to publish this letter, so it is available to SBC Councillors and your officers – many of whom read the NYE – and the NYE’s readership; so our correspondence improves knowledge of the law on photography and helps prevent incidents.