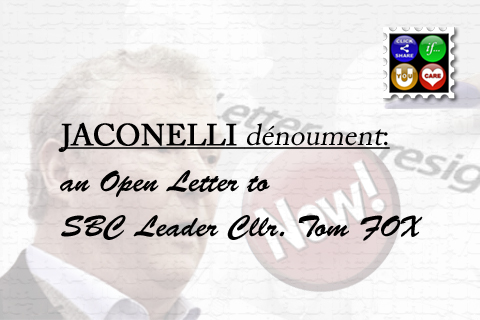 I note, with a measure of approval, that you have now determined a course of action on the matter of the inappropriate appearance on the Borough’s roll of honour of the name of the late Peter JACONELLI, former Conservative Councillor, Alderman and Mayor of Scarborough.

It is well over a year now since I first addressed you on this subject, on 18th February 2013 – and half a dozen times thereafter – to no avail:

Never an acknowledgment. Never a response.

Would you now please offer the public an explanation, with appropriate apologies, as to why you have ignored my many attempts to alert you to the need to issue a statement throughout this past year? As an elected member, you stand accountable to the electors of this Borough, amongst whom I am one. An elector may ask a question. Your failure to respond constitutes a dereliction of your duty as an elected and paid public servant, compounded by the further discourtesy of failing even to acknowledge my public interest question. It is also a clear indication of the Council’s determination to cover up the allegations against Peter JACONELLI.

I have noted, too, the rather ungracious terms of your Motion to divest Peter JACONELLI of his civic honours, seconded by Councillor Derek BASTIMAN [Con.], to be set before Full Council on Monday 12th May 2014.

The absence of any token acknowledgment to the citizen-journalists of Real Whitby (thanked already by Operation Yewtree, Operation Hibiscus and the Police & Crime Commissioner Mrs Julia MULLIGAN [Con.]) for the work that they have done to expose Peter JACONELLI – now totally vindicated by the BBC, the Chief Constable and the NHS – reflects no credit on you or your Council. On the contrary; it demonstrates the vital importance of a free press, holding paid public servants to account.

Almost a million people have seen, on the “Inside Out” documentary (broadcast on BBC North East & Cumbria and BBC Yorkshire and Lincolnshire), that the scurrilous attempts made by the Council – on your watch – to silence me and my fellow contributors to Real Whitby, and to close down the Real Whitby web-site, were nothing other than a bullying and cowardly last-gasp effort to prevent the inevitable exposure of those whose silence over many years amounts to nothing less than active complicity in Peter JACONELLI’s crimes.

Almost a million people have seen SBC caught by the BBC in an outright lie in denying its attempt to “terminate” Real Whitby.

The electors of this Borough may see these futile attempts to discredit Real Whitby for what they really are; a shabby and desperate bid to conceal negligence – perhaps complicity.

I note that the Council has responded to a request for information under the terms of the Freedom of Information Act 2000 with the following information:

The Motion to dignify Peter JACONELLI with the title of Alderman was Proposed by former Leader of Scarborough Borough Council, Councillor Mavis DON O.B.E. [Lab.]. It was Seconded by your predecessor, former-Leader of SBC Councillor Eileen BOSOMWORTH [Con.]. (Both Aldermen themselves).

Apparently, the Council’s records do not include any information as to what background checks, if any, were performed by the Council preparatory to the vote. One might have expected that a letter to the commanding Officer at Scarborough Police Station would remain on file – if such a letter was sent – as would any response received by the Council. Did the Council perform due diligence by making enquiries of Chief Inspector Tom FOX?

And it remains unclear which of today’s Councillors were present for that vote – or how they voted.

It is a matter of conspicuous public interest to know which presently-serving Councillors supported Peter JACONELLI’s elevation to the status of Alderman, given such widely-held awareness of his depravity, from as long ago as the late nineteen-fifties.

There will be elections in 2015, and electors are entitled to a high degree of transparency, in order that they may make an informed decision regarding the moral fortitude of candidates for re-election, before casting their votes. Could you please ask each of your Councillors, respectively, to make an open declaration on this point, stating their Party allegiance on 9th October 1996? Thank you.

The closing paragraphs of your Motion:

are hollow and sanctimonious.

The Council praised no victims for more than a year after then-Councillor Geoff EVANS ‘blew the whistle’.

The Council offered no support, counselling or solace of any kind to any of the victims.

In the aftermath of the Jimmy SAVILE scandal, both the Council and the North Yorkshire Police seemed to resent the prospect of the inevitably adverse publicity attendant upon the exposure of Peter JACONELLI.

The Council even provided incorrect contact details to the Police.

In the light of the Council’s determined disregard for the many victims who have come forward through Real Whitby, phrases such as “giving victims a voice” and “empathy with all victims” are, in my view, nothing more than self-enhancing and hypocritical platitudes (replete with poor grammar), affected solely to rehabilitate the Council’s (and your own) terminally contaminated reputation. They are perceived as insults by those who have suffered a terrible burden of misplaced shame, guilt and self-mortification over the criminal actions of a man whom the Council has elevated to the pinnacle of civic honour.

The Council has extended no apology to the victims for the deplorable breach of public trust inherent in Peter JACONELLI’s criminal actions. Neither has Scarborough Police extended an apology for its inexcusable dereliction of duty in failing to arrest Peter JACONELLI, Jimmy SAVILE or the other members of the Scarborough ring identified by Real Whitby.

Being mindful of this, and having failed generations of Scarborough youth over sixty years, your Council will, I trust, now be more forthcoming with a response to my next question:

I look forward to publishing the Council’s response – negative or affirmative – together with a transparent rationale for its decision.

In the public interest. Within the coming seven days. 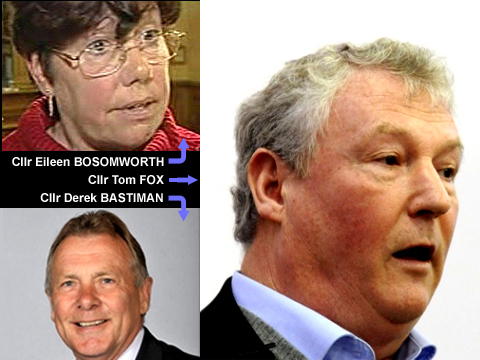