A Letter to the Editor from Mike WARD, who writes on this occasion not as an SBC Councillor but as a member of the public, to offer his personal thoughts on recent issues highlighted on Real Whitby and the apparent stand-off between them and our Councils.

Why do our Councils and Police Authority appear to be so defensive ? Can criticism really harm anyone ? Public bodies shouldn’t have anything to hide. They should all willingly embrace Nolan’s Seven Principles of Public Life – Selflessness, Integrity, Objectivity, Accountability, Openness, Honesty & Leadership. They need to listen to their customers, the residents, and engage with them.

If the customer is not always right then there is the opportunity by those in positions of trust to point out why, so everyone can move forward. Questions are too often viewed with suspicion. Full and effective answers are not always forthcoming. This in turn often leads to more (and more !) follow up questions. All too often, too much is read into a question – which can cause the receiver to be unnecessarily defensive meaning a complete answer is not given. A feeling pervades that the customer must know more. Maybe they do; so why can’t an honest answer be given as far as is known and allow the customer to provide more information which could broaden any understanding of a particular issue? The perceived problem needs to be addressed fully from the outset. Everyone’s opinions, views etc should be put into the mix. If allegations are made, then they need to be fully investigated and the outcomes made known.

Communication has to improve.

Much has and is being reported about Savile and Jaconelli. Having read the various articles, comments and emails over the last 15 months, it is almost impossible to believe that nothing was known at the time of their activities. It was a different time and I can understand some issues being overlooked, but sexual abuse and abuse against minors must have been as wrong then as it is now. No one can ever escape punishment for crimes of that nature and the record has to be set straight even if it is after their deaths. The victims deserve no less. They have to be listened to and what happened addressed.

If there was anyone who was aware yet stood back and did nothing at the time, then they have to be questioned as to why. How could anyone be party to abuse of that kind ? Some may quite rightly point to the much good work that both men undoubtedly did for Charity, for residents and for the Council – but this cannot be put forward as an argument to condone or excuse the abusive acts they committed.

At the May Council meeting on Monday May 12, a motion was passed to strip Jaconelli of his Civic Honours and this was my statement at the time:

“This motion is to be welcomed. I was first made aware of sexual abuse by Jaconelli when former Councillor Geoff Evans bravely spoke out in Feb ’13, as reported in the Scarborough Evening News. Thanks are due to Geoff and it is a shame that our local papers didn’t continue a campaign then for the removal of civic honours. At that time other emails were sent to the Council which were passed to the police. Due process can take time but why has it taken so long to get to where we are today ? No one can ever be allowed to escape punishment for sexual crimes or for that matter any crime which brings this Council into disrepute. Having read much around this issue over the last 15 months I am surprised that there wasn’t a court case when this man was alive. After the Inside Out programme in Feb this year Operation Hibiscus was initiated. Everyone needs to know they can come forward with information, that they will be listened to and it will be dealt with in the correct manner. There has to be trust in our Police Force. Speaking to Officers from Operation Hibiscus two weeks ago, they confirmed that without the Inside Out programme nothing might have happened – just shows the power of the BBC; but equally raises concerns which in turn need investigating. The victims and all of us need to give special thanks to Real Whitby. Without the persistent campaigning of Tim Hicks and Nigel Ward there would have been no ‘Inside Out’ programme, no investigation and maybe no motion today.

We can have sympathy for his remaining family – but even greater sympathy for his victims, who have lived with this abuse and the fact they were not listened to for years. I support this motion.’

Many questions remain to be answered and the outcomes of Operation Hibiscus and the IPCC investigation hopefully will provide them.

We all have a duty of care to victims of sexual abuse. Issues such as have been highlighted will never go away and right will out. Society owes a debt of gratitude to those such as former Councillor Geoff Evans and Trevor Harrington, among others, who had the courage to speak out. Even now, more must come forward.

If there are genuine issues to address, long may Real Whitby be there to address them.

Nothing is lost by talking. I have consistently encouraged our Councils to engage with Real Whitby.

Unfortunately, it may have become too personal; which is a huge shame. I don’t always agree with what I read on the site, but have always found those involved very willing to listen. Surely everyone should do the same. If mistakes are made or misreporting occurs, they do apologise. It is unfortunate that some refuse to read the website or just take exception to the headlines without reading further. We need to move forward and talking must help. Things that are wrong have to be acknowledged and addressed with thanks given for bringing an issue into the public domain.

Now has to be the time for openness, honesty and transparency. A time to talk, so the correct outcomes can be achieved. A time when all public bodies work in the best interests of those who put them in the positions of responsibility.

The journalists of  Real Whitby might ’cause annoyance, frustration or worry’ at times, but why can’t our Councils say ‘thank you’ when issues of real concern are highlighted and even resolved? I can fully appreciate that some of the comments posted after an article might cause offence and some definitely do not help Real Whitby’s cause. There should be more thought given when commenting after an article, though sometimes you can appreciate the frustration of the writer. Many of those taken to task in recent articles have most certainly been mistaken, ill-advised or morally wrong – but not everyone should be labelled corrupt without very compelling evidence. This can often cause personal distress to that person and their family. That does not help any campaign. The public should be the ones to judge after reading the facts.

Looking back, there have been other issues brought to light by Real Whitby which did give concern and which have caused a re-think on Council procedures, but no word of thanks has ever been forthcoming to Real Whitby. “Me Too!” Vouchers, Double Broadband Claims and Mileage Claims – to name but three. Poor administration and policies that were not properly thought through. Why not acknowledge the part Real Whitby played in the changes that followed ?

In one particular case, any internal report should have been published as the expense claims, as highlighted by Real Whitby and on the ‘Inside Out’ programme, did appear to be fraudulent.

No Councillor, no matter how experienced or how senior, should be permitted to ‘get away’ with claims of this type. Simply paying back a fraudulent claim cannot surely be the end of the matter. As with Maria Miller MP, it brings the other hard-working and honest Councillors into question.

No one is above the law. We have to have trust in our Council Officers and Police Forces to listen and act appropriately.

Maybe the time has come for a new approach. Public bodies and the media, by working together with a collective responsibility and proper communication, could ensure the aspirations and wishes of the communities they serve are met. Together, future misuse or abuse of position could be eliminated.

There has to be another way. We have to all learn from recent events and change for the better.

It cannot be wrong to say ‘thank you’ or ‘sorry’.” 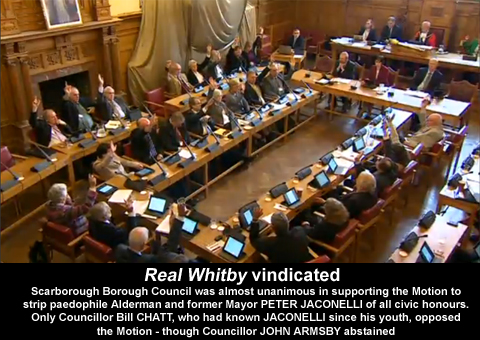