In a recent conversation with the producer of an investigative-journalism television series, I was asked just what it is that empowers me to scrutinise so diligently the conduct of democratically elected representatives and paid public servants. It is a fair question.

I explained that I regard the activity colloquially known as “feathering one’s nest” as an unforgivable breach of the public trust.

In my view, that definition bears a striking resemblance to the subject matter of this present two-part article – though “nest-feathering” is by no means confined to elected representatives and paid public servants; there are others who carry the burden of the public trust. It is important to us all that they do not betray that trust. I have quoted before the Transparency International definition of “corruption”:

I was concerned (but not surprised) that the story of the referral to the North Yorkshire Police Major Fraud Investigation Team of Tim LAWN (resigned Conservative SBC Councillor and erstwhile Chair of the North York Moors National Park Authority Planning Committee) did not appear in the on-line versions of the Scarborough News and the Whitby Gazette (Johnston Press sister newspapers of the Yorkshire Post, which published the Tim LAWN story on 3rd May 2013 – the day after the NYCC elections). Between them, the Scarborough News and the Whitby Gazette serve all of the immediate area surrounding the proposed Sirius Minerals polyhalite mine.

(Incidentally, we have since learned that the investigation is now in the hands of Scarborough C.I.D.).

I would have expected that the editor of Scarborough News and the Whitby Gazette would feel a sense of duty to inform the public of such a serious development through his two newspapers’ widely-read websites – where much of the public debate about the Sirius proposal has been raging since first it was announced more than two years ago.

So, on 4th May 2013, I emailed the editor of our local newspapers, Mr Ed ASQUITH, requesting a comment for publication.

Ed ASQUITH has not responded to that email – nor to a follow-up email a few days later on 7th May 2013, in which I expressed my disappointment at his reticence.

Quite obviously, news of a Major Fraud investigation into aspects of company formation, land ownership and share-holdings on the part of anyone closely connected with the NYMNPA Planning Committee could only have one impact on the good-standing of everyone involved in the planning process – a very negative impact.

But let us now turn our attention to the editorial comment in the Whitby Gazette last week, on Friday 17th May 2013.

This is how editor Ed ASQUITH, whom the Whitby Gazette has described as the “Paper’s chief who helped to create Whitby ‘feelgood’ factor” (page 21, Friday 3rd May issue) addressed his readers in response to recent objections to the proposal:

“Dear Reader; The arguments for and against the development of a Potash Mine in the National Park have reached a deep divide with the latest statements by the NYMPA and the points made in two independent surveys. The PA as clarified its concerns to the extent that only a national directive in the country’s wider interests might be able to put the mine plan back on track. It is raising sharp questions which is at the core of the issue. In doing so, the authority has moved the debate on from what might have been seen as maverick and fringe protest to more informed scepticism. The issues now being raised about whether we actually need the minerals and whether or not that need can actually be met, plus the growing concern about the environmental and tourism impacts, threaten to undermine full permission. The potash company might perhaps be forced to look outside the National Park for its mine head. Ultimately the govt. might step in on the basis that the country needs to benefit from the potential export value which would help redress our woeful balance of payments, and to boost the Gross Domestic Payments. In the meantime, all the new shareholders and landowners hoping to benefit, all the staff given jobs by the potash company, and its student support beneficiaries will be aghast at the idea that the members of the PA could at least delay the scheme which has significant backing from a number of quarters. Regards, The Editor.”

I have highlighted one passage in bold type for good reason.

I now have in my possession a 36-page document entitled “Certificate of Ownership Under Article 12” and rubber-stamped NYMNPA – a list of landowners in the Sirius Minerals ‘Area of Special Interest’ within the North York Moors National Park. I would suggest that it goes almost without saying that these landowners are the very ones whom Ed ASQUITH refers to as “hoping to benefit” in his editorial comment, quoted above.

The seventh entry on the first page of that document appears below, with suitably redaction of the names shown above and below the highlighted entry: 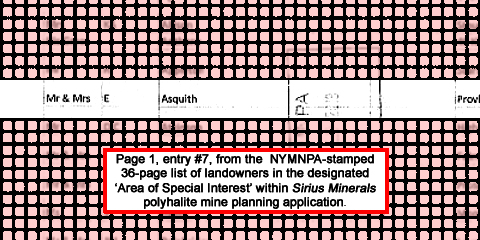 In my considered opinion, this would appear to be the same Mr E ASQUITH as the Mr Edward ASQUITH who appears here on the COMPANIES IN THE UK website.

(There are other interesting names on the list; but more of that on another occasion).

This gives cause to view the Whitby Gazette and Scarborough News coverage of the potash/ polyhalite project in a new light. That coverage has, at best, exhibited an extraordinary degree of gullibility in propagating the extravagant claims of the Sirius Minerals PR-campaign, or, at worst, a carefully orchestrated positive ‘spin’ calculated to sweep public opinion in favour of the development has been conducted by the “Paper’s chief who helped to create Whitby ‘feelgood’ factor”.

Would this be entirely appropriate – if it were under the editorial control of a man with a significant vested interest in the success of the Sirius planning application?

Accepted that – in a democracy – the Press must be free to be partisan, is an editor at liberty to “create” amongst the trusting public a “feelgood” factor that will weigh strongly in favour of his own personal interests?

I would say not.

The Press Commission Guidance on this question is illuminating.

When one bears in mind that the Whitby Gazette and the Scarborough News, with a combined circulation of around 25,000 copies per week, together constitute the sole local sources of print-media information on the progress of the Sirius proposals, one might easily conclude that public opinion is in large degree susceptible to being pro-actively moulded by the local press.

One cannot easily dismiss the suspicion that Ed ASQUITH’s editorial integrity may have fallen victim to the temptations of his own self-interest;

So I emailed Ed ASQUITH once again yesterday, offering him an opportunity to offer a statement for publication in regard to any vested interest he may wish to declare, making clear that I felt free to report on his response, if any.

There has been none. Not a word.

There is an old Yorkshire adage: “Where there’s muck, there’s money”.

The reverse appears to have some validity, too: “Where there’s money, there’s muck”!

In summary, then, this two-part article has hopefully demonstrated two salient points:

1) In the first article; that SBC’s Lisa DIXON – who, on 28th March 2013, threatened legal action against Tim THORNE, Tim HICKS and myself, and against the Real Whitby Magazine – appears to have benefited considerably from the helping hand provided to her, as Monitoring Officer to both SBC and the NYMNPA, by Real Whitby, in the form of the Formal Complaint which she received on 21st March 2013. She then needed a further six weeks before she referred it to the Major Fraud Investigation Team – thus keeping the matter under wraps until after the NYCC elections.
One wonders if she would ever have scrutinised Tim LAWN’s Register of Interests so diligently (or at all) without the information provide in the Real Whitby Formal Complaint. (No doubt there will be a letter of commendation to Real Whitby from the Council in the post any day now – not!).

2) And in the present article; that the independence and transparency of an editor of local newspapers is by no means something that may safely be taken for granted.

As for the planning decision, with so many new limited companies featuring the word “Minerals” in their titles having been registered through one and the same Whitby accountancy office (and at around the same time that Tim LAWN’s Hollybush Minerals Ltd was registered), one could be forgiven for entertaining a suspicion that some selective sharing of privileged information may have been taking place. It is hard to see how that could serve the public interest.

Our continuing investigation will no doubt progress more quickly as new informants come forward in the noble cause.

Meanwhile, we wait with bated breath for the Whitby Gazette and the Scarborough News to report on the significance of the latest set-back for Sirius Minerals – the Environment Agency has written to the NYMNPA declaring its position – OBJECT (the bold BLOCK capitals appear in the original, here) – in a letter dated 15th May 2013. 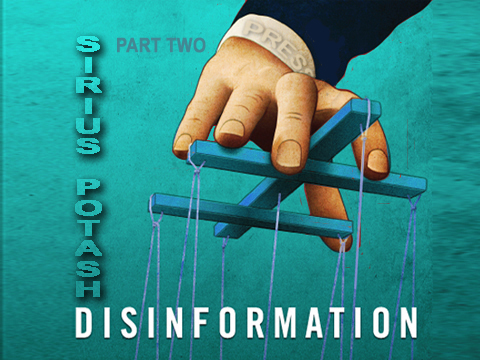