Following allegations made by Real Whitby contributors over the past eighteen months and featured on the BBC “Inside Out” documentary broadcast on 10th February 2014, this draft  Motion has now appeared on the Scarborough Borough Council website, here:

The Motion includes no recognition of the investigative work carried out by the Real Whitby team. 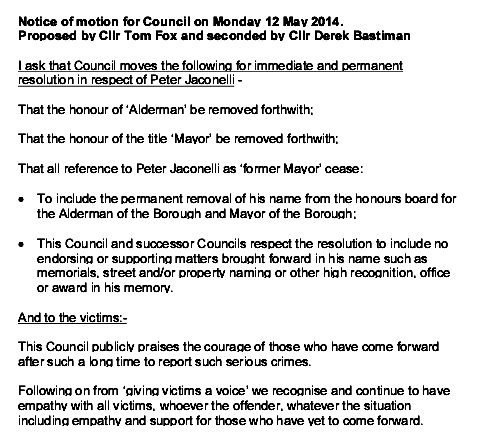 This Council and successor Councils respect the resolution to include no endorsing or supporting matters brought forward in his name such as memorials, street and/or property naming or other high recognition, office or award in his memory.

And to the victims:-

Following on from ‘giving victims a voice’ we recognise and continue to have empathy with all victims, whoever the offender, whatever the situation including empathy and support for those who have yet to come forward.

[With thanks to Keith Meatheringham of the Dobson Agency for use of the photograph of Peter Jaconelli in Mayoral robes and chain].